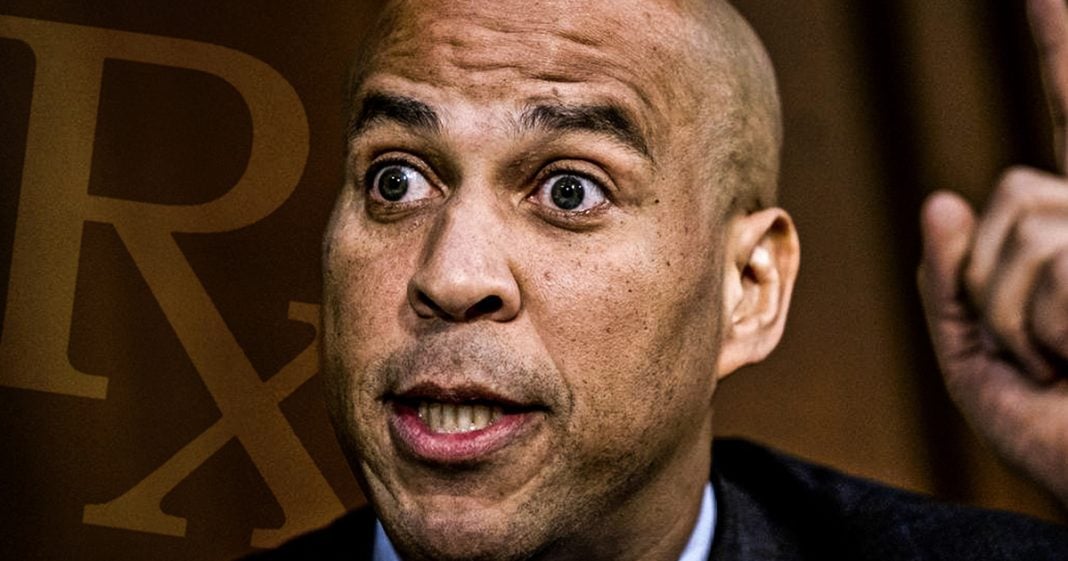 Senator Cory Booker has long been viewed by Progressives as the candidate of Big Pharma. He’s taken quite a bit of money from the industry, and he’s voted to help them protect their profits by not allowing cheaper drugs to be imported into the United States. But in the last year or so, he’s changed his tune. The biggest question is whether or not this reformation is genuine and can the voters trust him on this issue. Ring of Fire’s Farron Cousins discusses this.

Even before he announced that he was going to be running for president in 2020 Senator Cory Booker had a very real problem and that problem is that a lot of progressive’s view him as a very clear establishment pro corporate candidate. And the evidence of that is basically exemplified in the best place with his ties to big Pharma. Now Senator Cory Booker from New Jersey where a lot of these big pharma companies have their headquarters, that’s where their factories are. He has taken hundreds of thousands of dollars over the course of his, you know, seemingly short career from pharmaceutical companies. You know, he’s one of the top recipients, Cory booker. It gets a lot of money from big Pharma. And then not that long ago, booker was one of the Democrats who voted against the reimportation of cheaper drugs from Canada. He voted against a measure that could have given American citizens cheaper pharmaceuticals.

Since that vote happened and Cory booker received a ton of backlash, he’s kind of changed his tune, at least on paper. You know, he’s cosponsored legislation aimed at reducing drug prices here in the United States. He, you know, has been with Bernie Sanders talking about the need to lower prescription drug prices. Uh, he’s pleasant. He’s not going to take corporate money for his 2020 campaign, but all of that and the very short turnaround of it is still suspect. And it should be because for a very long time, Cory booker, again, one of the top recipients, a big pharma dollars voted against the reimportation measure on the basis that these drugs may not be as safe, which he knew was a lie. He knew it was a lie. Canada in fact, oftentimes enacts a more vigorous testing standards than we do here in the United States. In fact, our testing standards here in the United States, our garbage cause most of them are solely based on studies performed by the pharmaceutical company themselves, where they’re allowed to manipulate and phony up the data.

Then they submit it to the FDA. The FDA doesn’t do the testing themselves. They do in some cases, but not all. So yeah, I would go ahead and take my chances with a Canadian drug where they have stricter standards and haven’t had a republican government deregulating the hell out of the industry. Then take my chances with American pharmaceutical companies. But maybe that’s beside the point here. Cory Booker knew that and he lied about it and he used that as justification to vote against that particular piece of legislation. It was after this again that he, he kinda changed his tune. He was confronted by progressive’s. They pushed him on the issue. They held his feet to the fire and we have seen results. We’ve seen a change in the talking points. We’ve seen him change his stance. We’ve seen him sponsor and cosponsor legislation, but it hasn’t been long enough to determine whether or not this reformation is genuine.

2020 folks, we cannot, we cannot repeat the mistakes of 2016 unless of course you want four more years of Donald Trump and deregulation because that’s how you get four more years of Donald Trump and deregulation by putting up a mealy mouth centrist, moderate Democrat who says one thing to their constituents but then does another to benefit corporations. Cory Booker has not had this change of heart long enough for us to truly see if this is who he is now or at the first sign of victory after he’s got progressive’s on his side as he just immediately going to switch back. Kind of like the Democrats with their new proposal of Medicare for more, not Medicare, for all, just medicare for more, more people can have access to it. Not all of you. We’re just going to read a let a few more people in. To me that’s kind of Cory booker.

That’s where he stands right now. He is a medicare for more, not a medicare for all. Maybe you’ll get there. Maybe he’ll come to the medicare for all, and I’m speaking metaphorically, not in terms of supporting those policies. You know, but we still have a long way to go. And if Cory booker or any other of these Democrats who have been stigmatized with this establishment label really want to get our votes, then they need to prove that these reformations are genuine and that they really have come to the progressive side and that they’re actually going to do the things that they say they do. And they’re not going to let corporations water them down. But until that happens, Cory booker still has a very real big Pharma problem. Rather, whether it’s real or imagined, we can see the history. We see what he says now, and the truth is likely somewhere in between those two.