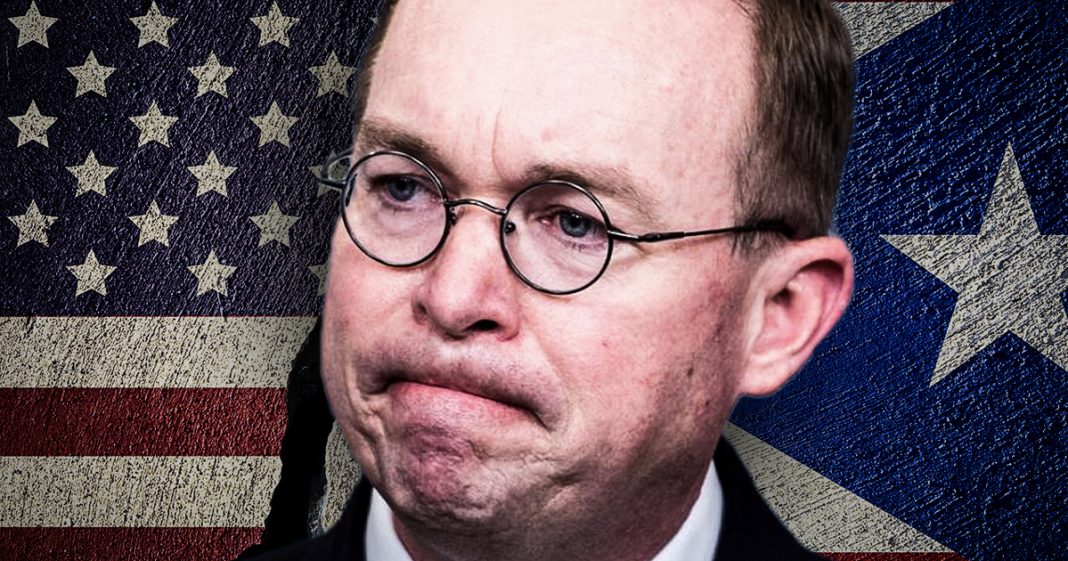 Acting chief of staff Mick Mulvaney is working on a plan for Trump that would allow him to steal money from disaster relief programs for Puerto Rico and California in order to shore up the cash he wants for his border wall. American citizens are still reeling from natural disasters, and the Trump administration wants to prolong their suffering just to score some political points with right wing pundits. Ring of Fire’s Farron Cousins discusses this.

Well, we’re inching closer and closer to another government shutdown as Democrats rightfully, are not going to give Donald Trump the money that he wants for his border wall and the corporate media is loving this. I mean CNN on their website has a big counter down to the next shutdown, so they love this. The corporate media feast upon it. Not giving a single crap about any of the workers who are going to be impacted or the Enviro economic damage that’s going to be done from another. Shut down. They love people coming back, looking at that little countdown clock to when things are gonna go bad, but here’s the thing. The White House understands they’re not going to get the money that they want from the Democrats. So acting chief of staff to Donald Trump. Mick Mulvaney is actually working with a couple of folks from the budget office right now in the White House and they’re trying to come up with a plan.

Basically identifying several different areas where Donald Trump can issue an executive order and then steal money from other projects without having to get approval from Congress and then spend that money on his border wall. That’s what they’re working on right now and lawyers in the White House or trying to come up with a plan to defend this in court because they know that it’s not going to fly. They know that this would be hugely illegal, but they still want to be prepared for it and they kind of want the president to do it anyway because it’s being advised right now by again Mick Mulvaney, who is one of the most corrupt and incompetent people the Republican party has ever had to offer and here’s where the story gets a little more twisted. The projects that they have identified where there are going to take money away from include the following relief efforts for Puerto Rico

flood control projects in northern California, wildfire relief funds for California and military housing funds. To put that another way, in case you’re not familiar with that, that’s the funds that the government you’d uses to build new homes for military families, for active duty service members, you know, homes for them to live in, but we’re going to take that money away. We’re going to take money away from California that has been ravaged by floods and fires and droughts and every other natural disaster you could imagine. We’re going to take that away because trump hates California and of course Puerto Rico still struggling almost two years past Hurricane Maria. We’re just going to cut off the spigot of cash to them even though we’ve given them hardly anything to rebuild the island. We’re going to send them a giant middle finger instead and say, we’re taking your money and we’re going to build a border wall that most people in this country don’t even want.

That is what the trump administration is working on right now. That is something that they are going to attempt to do because they believe according to reports that this would be an easier legal battle than him declaring a national emergency and then pretty much still stealing the money from those exact same funds in order to build his border wall. However, this plays out, these areas, these specific budget items that the trump administration has targeted for cutting are absolutely vital for these areas. Puerto Rico needs money. They need help. They need funds. We should be doing something. These are American citizens and hell, even if they weren’t, they’re still human beings and they deserve help. California, I, we had an entire city ironically named paradise that’s gone because of the fire’s gone. They need help. Flood control projects in areas of California desperately needed, especially as we continue to destroy the planet, but Nope, not gonna do that.

We’re not going to invest in new homes for our troops. The people that we’re likely going to send down to Venezuela to go fight another war for oil this time in a different part of the world. We don’t care about them once they’re back home. We just want to make sure they can secure that Venezuelan oil. That’s what the trump administration is telling us and they’re doing it. They’re starving. These needed projects of money for one reason and one reason only because they want to score a few more points with right wing conservative pundits. Never forget that. That is what this entire fight is all about.