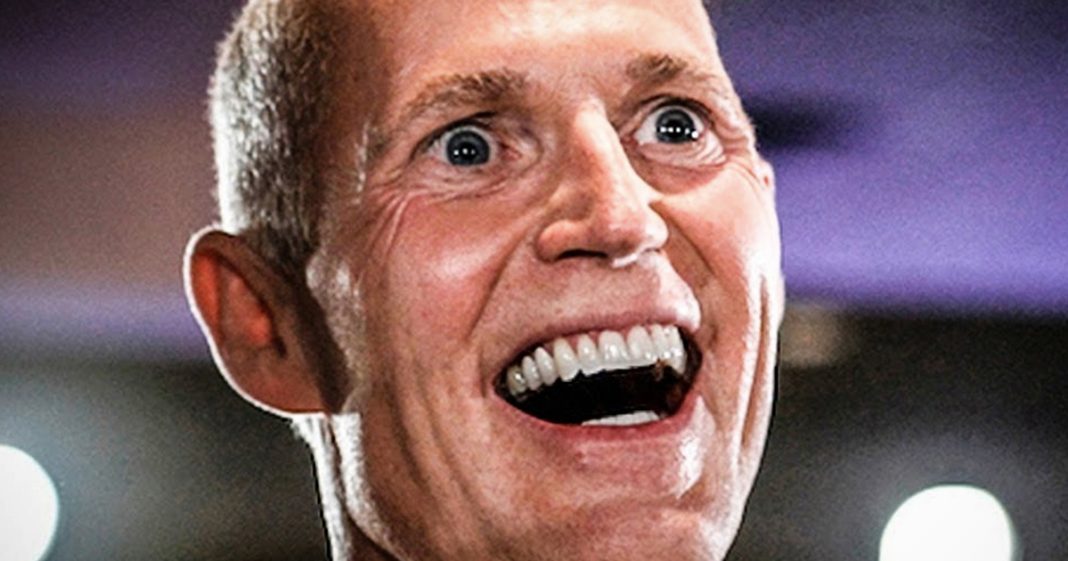 Former Florida governor and current US Senator Rick Scott has announced that he will not be placing his hundreds of millions of dollars into a blind trust now that he is a senator, something he had done while governor of Florida. Scott has made tens of millions of dollars while serving as an elected official, and just like Trump, he views holding public office as a way to make huge profits. Ring of Fire’s Farron Cousins discusses this.

The state of Florida has had some really bad and corrupt governors throughout our entire history here, but our recently departed governor Rick Scott, who is now serving as a United States senator. He was probably one of the worst, certainly one of the worst in my lifetime. But, uh, here’s the thing about Rick Scott, you know, he was basically forced to leave his own company after they were found to have committed one of the largest frauds against government healthcare programs in the history of the United States. In fact, at the time it was the largest fraud, uh, in terms of healthcare programs run by the government of the United States. Rick Scott had to plead the Fifth Amendment more than 70 times in order to not incriminate himself in those crimes. And then after that, after he made his hundreds of millions of dollars ripping off the federal government again, uh, he ran for governor twice and won twice. And then he ran for Senate and won that seat.

So this guy is corrupt to the core. There is no question about it. And now this week, Rick Scott has announced that unlike what he did for governor when he was governor, he is not going to be putting his immense fortune into a blind trust while serving as a United States senator. Nope, not Rick Scott. He doesn’t need to hide his money. He doesn’t need somebody else dealing with it. So he avoids conflicts of interest, not going to happen. And this is a guy who has money in all sorts of projects throughout every sector, almost of the US economy. It is virtually impossible for him to vote in Congress without enriching himself. And for the record too, when he was governor of Florida, he didn’t even put all of his money in a blind trust. His wife’s 170 plus million fortune was not in a blind trust. And she made a ton of money while he was governor.

But so did he. In last year alone, his last year being governor, uh, his net worth rose by 56 percent, 56 percent, $83,000,000 that guy made last year while serving as governor of the state of Florida. That is corruption. I guarantee you, if we had any investigative bodies down here in Florida that weren’t controlled by Republicans, this guy would be in prison right now, but unfortunately this state is wholly owned and operated by the Republican Party, and because of that, Rick Scott gets to sit in his nice new Senate office instead of a jail cell, and he’s bringing that same corruption that became a hallmark of the state of Florida with him to the United States Senate.