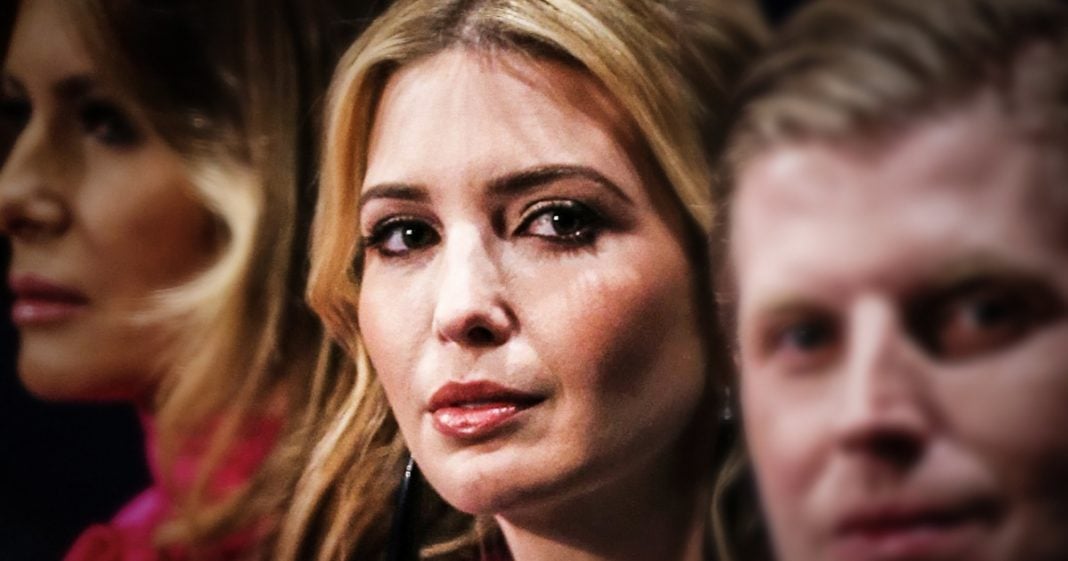 Ivanka Trump will be heading up the White House’s newest initiative to pull 50 million women from the developing world out of poverty by spending $50 million. For those who know math, this amounts to $1 per woman. The White House swears that other government agencies are going to chip in money to up that total, but right now none of them have stepped up, leaving the total at just a dollar per woman. Ring of Fire’s Farron Cousins discusses this.

Last thursday, the White House, actually Ivanka trump in an op Ed for the Wall Street Journal, uh, but they announced this new women’s global development and prosperity initiative and in her op-ed, Ivanka trump said that the goal of this is to invest in the greatest resource we have here on planet earth and that is young spirited women in developing countries who want to go out and start their own businesses and in order to help what she claims is roughly $50 million women, she’s going to have the government spend $50,000,000. Now, when this was announced, it did not get the play that it deserved, but everybody immediately noticed that if you’re going to spend $50, million dollars to help 50 million women, that that is a one to one ratio. Meaning that you’re literally spending $1 per woman. One dollar is what Ivanka trump is offering women around the globe to get yourself out of poverty.

Go Start Your Business, get a better education, have better opportunities. You get a dollar from Ivanka trump’s new pet project, but don’t worry because the White House immediately came out later after they realized how horrible Ivanka was at math. It said, no, no, no. That’s just the money being pledged right now from the USAID office. This has been budgeted for this, but other government agencies are also going to kick in money, you know, from their budgets and so far none of them have and none of them have indicated that they have that, but, but don’t worry it’s totally going to be more than $50 million. In fact, they say that it could be as much as 300 million. Well, I guess that’s better because that math would work out to $6 per women. So as long as the only thing holding all of these women back was one trip to Mcdonald’s to get a value meal, then I guess we’re okay.

Right? I mean six bucks per woman is better than a dollar per woman, but at the end of the day, neither of these are going to do anything to address the actual problems. Because here’s the other part of this story. It’s not just the US government that’s going to be working on this. No, no, no, no. They have teamed up with corporations, so corporations get to run their flashy ads and spend tons of money saying we’re a part of this women’s global development and prosperity initiative. We’re out here helping women all over the planet go by are cheap stuff that we make in sweatshops overseas where the workers are predominantly women who we treat as slaves. So you’re literally Ivanka teaming up with the people who are holding women down all over the planet. And you somehow think that kicking in six bucks per woman along with these abusive corporations is going to solve the problem.

You’re going to save women all over the planet. It’s not going to happen. You want to help women not just all over the planet, but right here in the United States, uh, increase the minimum wage. Stop attacking, attacking their reproductive reproductive freedom. How about you tell these corporations that if they ever use sweatshop labor again, you’re gonna bring back the corporate death penalty and not allow them to do business in the United States. Watch how fast things change for women overseas. You tell corporations like Walmart and apple that they have to make their products. If they choose to make them overseas, you’re going to make them in a factory where women are paid a living wage. You’re going to give them benefits. You’re going to take care of them and treat them as human beings. That’s how you lift up women, not teaming up with the corporations that have been taking advantage of them for centuries.

At this point, you’re teaming up with the bad guys. You’re spending a paltry sum of money. Why? Because you want to have something on your resume that looks like you attempted to do something. Same as all these other corporations. Oh, we’re going to see tons of flashy ads, multimillion dollar ad campaigns coming out from these corporations. The White House is going to tout this as some great. Look how much we love women initiative, but at the end of the day, nothing is going to change because you’re teaming up with the people who have made conditions for women all over this planet so much worse.