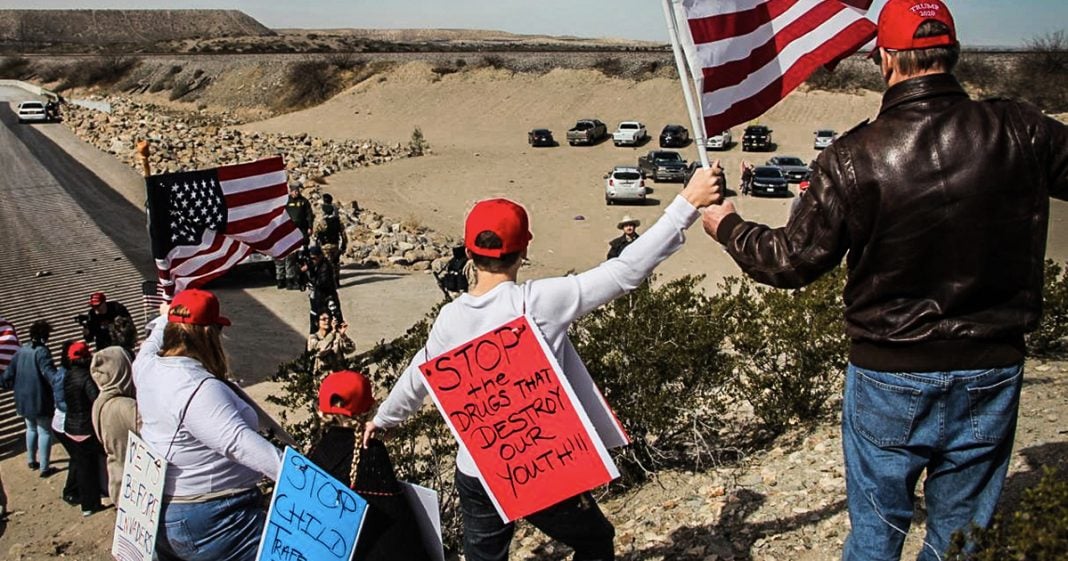 Last week Trump suggested that he would build a “human wall” along the southern border if Democrats don’t give him the funding that the wants for his border wall. Apparently some of his supporters took the message to heart, and they went down to the southern border and formed a wall themselves. Ring of Fire’s Farron Cousins discusses the insanity of this and why his supporters will literally do anything he tells them to do.

Last week, following the state of the Union address, Donald Trump said that we may have to build a human wall along the southern border, and almost immediately upon hearing those words build a human wall, dozens of trump’s supporters thought it was a call to action, and this past weekend they actually showed up at a stretch of the border where part of the barrier is missing. Dozens of people wearing Magda hats and waving. American flags showed up linked arms and created a literal human wall along the southern border of the United States. You know, when I saw this story, I read about it, I saw the pictures of these moron standing there making their human wall. I couldn’t help but think how disappointing it is that Donald Trump hadn’t suggested that we build a sea wall or maybe an artificial coral reef because these idiots are stupid enough to just walk themselves into the ocean and sit down there on the bottom, letting little corals develop all over their bodies.

The point is, these people are dumb enough to do whatever the president tells them to do or whatever they think it is. The president has ordered them to do this is a cult. That’s cult mentality. What we saw develop on the border this weekend with those morons linking arms, wearing their mega hats. These were hardcore trumpers. That’s a cult. We have a cult leader running the United States today. We have his coat, like followers out there defending him on twitter, defending him in the streets and apparently defending him along the border without ever once. Stopping to think, you know what? Maybe this is. Maybe this is wrong. Maybe this is weird. Maybe I shouldn’t be standing on a border linking arms with a smelly guy next to me when we actually have border patrol agents who do patrol this border and if you’ve seen the pictures, it was a very small stretch of border where the the barrier was missing, but nonetheless these idiots thought it was their job to go stand there and basically act as human shields essentially willing to take a bullet if necessary to prevent brown people from coming into the United States. Trump has started a cult.

I don’t know how we undo this damage because yes, it was only a few dozen people that came down there, but when you look at his twitter feed, when you see the sick offense, go on tv it talk about how much they love him, how great he’s doing, how he can do no wrong, something is wrong with these people’s brains. They were craving a leader and they got one, and this is a leader that is driving them all towards destruction, a ride that they happily buckled in for. They don’t care what happens to them as long as they protect their dear leader, Donald Trump. This is dangerous. This is how countries descend into fascism under dictator rule. We’ve seen this story play out before throughout world history, and it’s never ended well for the country. That becomes a colt.