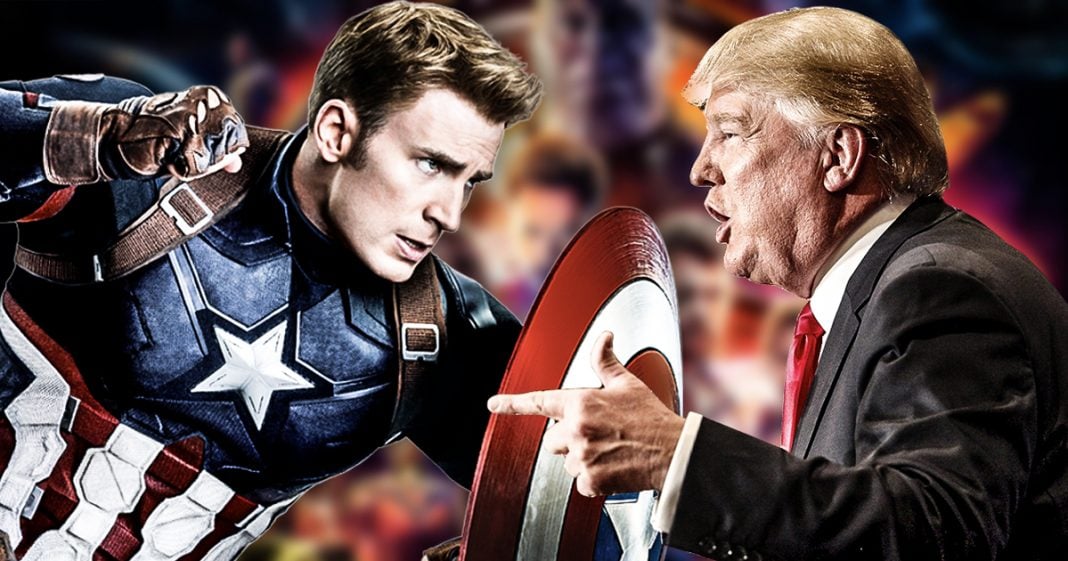 Actor Chris Evans is proving that he can be Captain America in real life and not just on the big screen by taking on corruption and misinformation. Specifically, Evans smacked down Fox News host Brit Hume after Hume claimed that Trump was too stupid to know what the Trail of Tears was when the President made the disgusting reference in an attack on Senator Elizabeth Warren. Ring of Fire’s Farron Cousins explains what happened.

Over the weekend, Donald Trump tweeted out an attack on Senator Elizabeth Warren after she officially announced that she was running for president under the Democratic Party’s banner. Trump tweeted out the following today, Elizabeth Warren sometimes referred to by me as pocahontas joined the race for president. Will she run as our first native American presidential candidate? Or has she decided that after 32 years, this is not playing so well anymore. See you on the campaign trail, Liz. So that’s what Donald Trump tweeted out. And everybody automatically assumed that this was obviously a reference to the trail of tears. So basically Donald Trump made a joke about the genocide of native American peoples here in the United States. Um, and after everybody was attacking him, Fox News host, Brit hume decided to jump in and defend the president. And the only way he knew how this is what hume tweeted. Yes. Because Trump has noted for his knowledge of 19th century American history, visa vi the native population.

Geez. So, Brit Hume is essentially out there telling us that Donald Trump is too stupid to make a genocide joke because he doesn’t understand anything. Well, at that point, almost like a superhero incomes, Captain America, Chris Evans himself who tweets out the following in response to Brit humes, horrible defense of the president of the United States. Your defense is that he’s too uneducated to have made this offensive remark. Also, can you imagine if another president admitted to not knowing what the trail of tears was by your logic? His ignorance has become normalized slash expected. Lastly, then why did he capitalize trail? This response by Chris Evans was absolutely brilliant. It was perfect, and it touched on everything that is wrong with the Trump presidency itself. I mean, this guy is really proving himself to be a real life captain America at this point, taking on corruption, arrogant, stupidity, and everything that threatens our country today.

Uh, you know, obviously, yes, Republicans are normalizing Donald Trump’s stupidity. They, they did it with George W dot Bush. They laughed it off. They laugh it off with Pailin and Bachmann and all of the others. And that’s not okay. We’ve seen the damage that that can do here in the United States. We’re living under it when you enact policies because you know nothing about political process or economic process or foreign policy that damages the United States. We’re seeing it with the trade wars. We’re seeing it with their environmental policy. We’re seeing it with their foreign policy and withdrawing us from necessary treaties and packs that we have with other countries. So yes, Trump stupidity is damaging the United States and more importantly stopped trying to write it off like, oh, well this guy just doesn’t know history. He just doesn’t know this. He doesn’t know that that is not an acceptable excuse for anything.

And Chris Evans is 100 percent right. If he didn’t know what he was referring to, he would not have capitalize the word trail. Yes, Donald Trump does like to randomly capitalize words here and there, but trail was in all caps. Why that word? Why not see you on the campaign trail? See you on the campaign trail. He picked that word for a reason and only a complete Trump suck up and sick offense like Brett, a Brit hume would be able to look at that and try to write it off as just the president being a moron. He is a moron, but in this case, he knew a Maura. He was a moron. Basically. They knew exactly what he was trying to do. This was not an error. This was not a random capitalization. This was Donald Trump trying to make a genocide joke because he’s too stupid to understand why that would be so offensive.