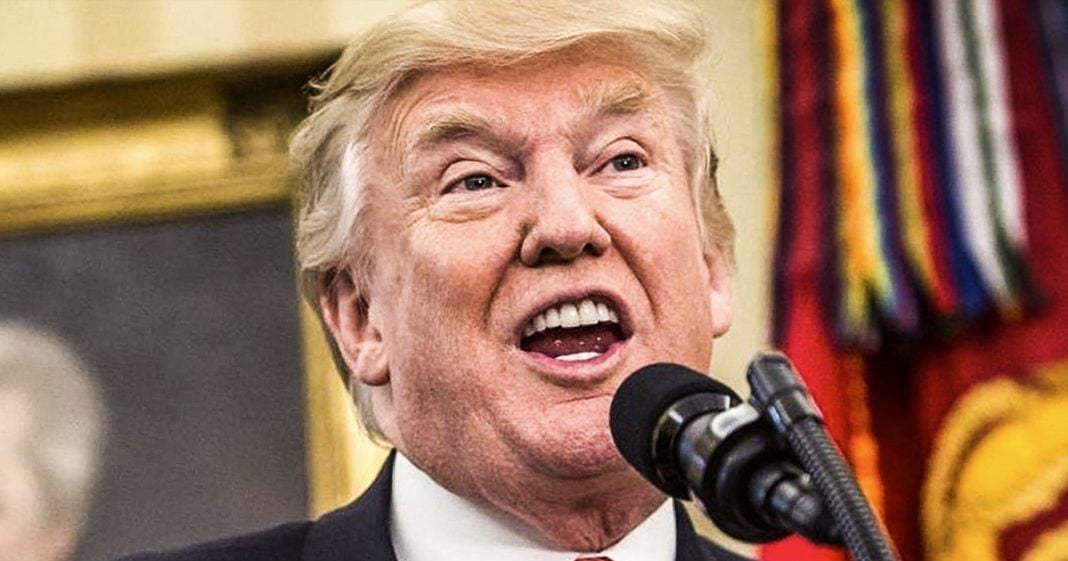 Donald Trump is clearly losing his mind, and for some reason his supporters refuse to accept that the man isn’t playing with a full deck. On Monday, Trump went on a Twitter tirade about how Democrats are “crazy,” and then less than an hour later he told Democrats that they needed to lighten up and have some fun. Ring of Fire’s Farron Cousins discusses what’s happening and why Trump isn’t as stable as his supporters think.

You know, one of my favorite things about Donald Trump is the fact that this guy is just absolutely immune to hypocrisy, like he has no idea what it means to be a hypocrite. I don’t even think he knows what that word means. And yesterday he gave us a phenomenal example. Around 8:00 AM yesterday morning, Donald Trump tweeted out the following, the Democrats do not want us to detain or send back criminal aliens. This is a brand new demand. Crazy. One hour later, one hour later, trump tweets out the following. The Democrats are so self righteous and angry, loosen up and have some fun. The country’s doing well. You literally an hour before you sent this to eat, called them crazy and you made up lies about them like you do every single day. Seriously. Honest to God, Donald, if anybody needs to loosen up, it’s probably the guy who spends all day on twitter writing in all caps, screaming about things that aren’t even real.

I don’t understand what happened in that one hour, you know, between 8:00 AM and 9:00 AM, but perhaps to Donald Trump. Maybe get his hands on some medical marijuana or something like, hey guys, everybody just chill for awhile. Let’s just do relax. Democrats. Things are awesome right now. Have you ever seen like trees and stuff? Those are awesome. They’re like super tall. This was totally out of character for the president, but what he’s doing is he’s just gas lining us. He’s gaslighting the entire country trying to warp reality and say that, you know, even though I’m having these twitter meltdowns, the Democrats are the ones who are a little too uptight. Taking things a little too seriously. We know that’s not true. I mean, Democrats do take a lot of things very seriously, like corruption, like environmental destruction, like the need for Medicare for all because nobody can afford to get healthcare in the United States if you’re not part of the top five percent of income earners.

Those things we take very seriously and to the presidents. Other point the country is doing well in what regard? Seriously? In what regard is this country doing? Well? We’re not a leader in anything globally anymore except for corruption. We’re destroying our environment. We’re poisoning our own citizens. We have one of the highest incarceration, incarceration rates of any developed country. We can’t afford healthcare. People are dying because of it. So how are we doing? Well, the answer is we’re not. Everything is going down in this country and it’s thanks to the policies of Donald Trump and the republican party, so if they want us to lighten up and relax, oh, trust us, those days are coming, but not until we finished these policy initiatives to help preserve the future of this country that Republicans have been so happily destroying for well over a decade. Now, once we do that, trust me, we’re all gonna. Lighten up, loosen up and enjoy things because at that point, America really will be doing well.