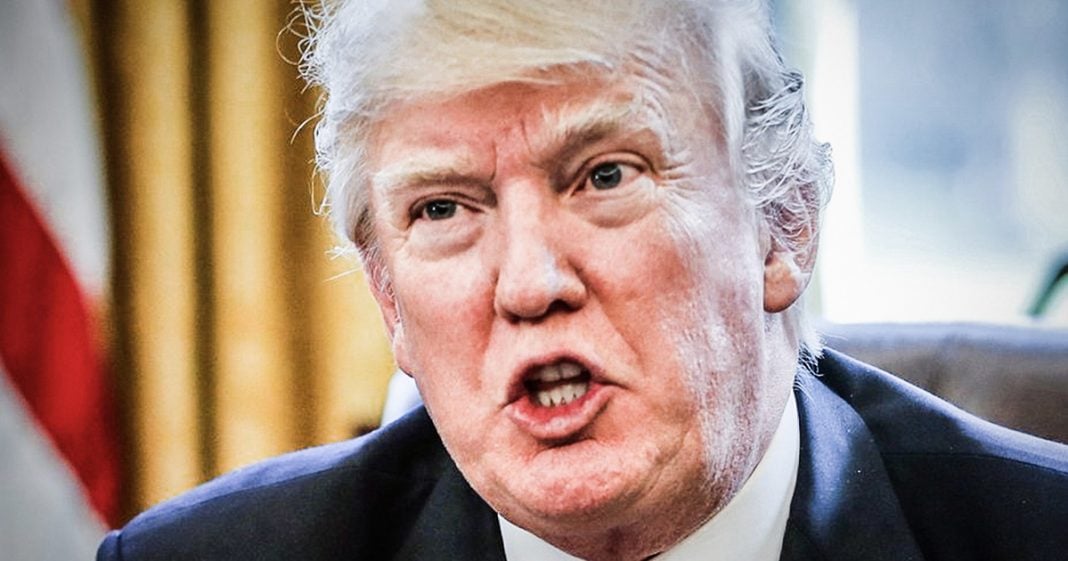 Donald Trump loves Twitter. It gives him unfettered, instant access to millions of people. But all too frequently, the President has said things on Twitter that really shouldn’t have been said out loud, and that could come back to haunt him in the very near future. Judges, prosecutors, and plaintiffs can all use these Tweets against him in court, and they can be used to show that the President is issuing policies based on politics, not on any sound reasoning. Ring of Fire’s Farron Cousins explains.

We’re just a few days away at this point from another government shutdown as nobody’s been able to come up with a plan to keep Donald Trump happy because he wants his border wall. He wants his billions of dollars for it, and the Democrats say, no, this is a horrible plan. The public doesn’t want it. It’s a waste of money. We’re not going to do it, and the Democrats are in the right on this particular issue. They are correct. We do not need it. It is a waste of money. Nonetheless, Donald Trump understands that he ran on this issue. People like Ann Coulter gonna keep calling him out on it, and so he’s going to have to do something, and if the Democrats never cave on this issue and I hope they never do, it’s eventually probably going to lead to Donald Trump declaring a national emergency, which he again hinted at as recently as last week during his State of the Union address.

So Trump is still saying he might declare a national emergency in order to secure the funding necessary for his wall. Well, here’s where things get a little tricky and I’ve explained how the national emergency funding thing works in videos in the past. But here’s another part of it. Obviously, if Trump declares a national emergency for a nonexistent emergency, an emergency that would require the administration to use eminent domain to take control of land along the border, land owned by private owners, uh, so they have to use eminent domain to take these people’s lands away from them. Um, the money that would be going to pay for all of this would be diverted from other funds, so states get harmed that way. Um, and eventually all of this is going to be challenged in court and you know, what exhibit a is going to be for any trial, whether it’s for the eminent domain law suits that are inevitable, whether it’s for the state law suits against Trump that are inevitable.

Exhibit a is going to be donald Trump’s own Twitter feed. The Washington Post recently did a phenomenal story explaining how Donald Trump’s personal Twitter feed can actually be used against him in a court of law. Because after all, they have already determined and said that any tweet sent out by Donald Trump, even on his own personal Twitter, these are presidential statements, presidential declarations, and so that means every time Trump has gone out there on on public in Twitter to lie to us about the need for a wall, those can be used by the prosecution. Those can be used by the attorneys trying to stop the imminent domain or the diversion of funds or the entire creation of the wall itself because Trump has lied repeatedly about this particular issue. He said that we have the people coming over bound and gagged with tape over their mouths in the trunk of cars because apparently he had watched and taken that day.

He has said that coyotes are also coming across with some of these bad people and bad are bringing the coyotes whether, well, whatever the hell that means. That’s also not true. The lies coming from his Twitter feed about the need for the border wall are absolutely endless and the lawyers are going to have a field day showing that Donald Trump knows there isn’t a national emergency. He’s only doing this for political reasons and therefore the national, uh, uh, emergencies, act, national emergency powers that he has should not apply to this particular situation. And here’s the thing. I know Trump has remade a lot of the court systems as Republicans tend to do. They appoint conservative judges because Democrats actually ignore that crap for some reason. It’s going to be difficult for even them to uphold this though because there is incontrovertible proof that Donald Trump is using the wall as a political tool rather than as an actual solution to a real national emergency.

Any talented lawyer or even half talented lawyer in this country, we would be able to win that case and Trump, because of his big mouth, because of his love of Twitter and is nonstop executive time has already destroyed his own case, his own defense on this issue because he can’t stay quiet long enough to not tweet out something stupid. And here’s the best part. It’s not just about the border wall, it’s about everything. He’s tweeted out, obstruction of justice that we know Miller has gone through his Twitter feed. He has tweeted out threats. He has tweeted out witness tampering his own Twitter feed eventually, whether it’s through policy or through the criminal investigations, Trump’s own Twitter feed might be what finally takes him down.