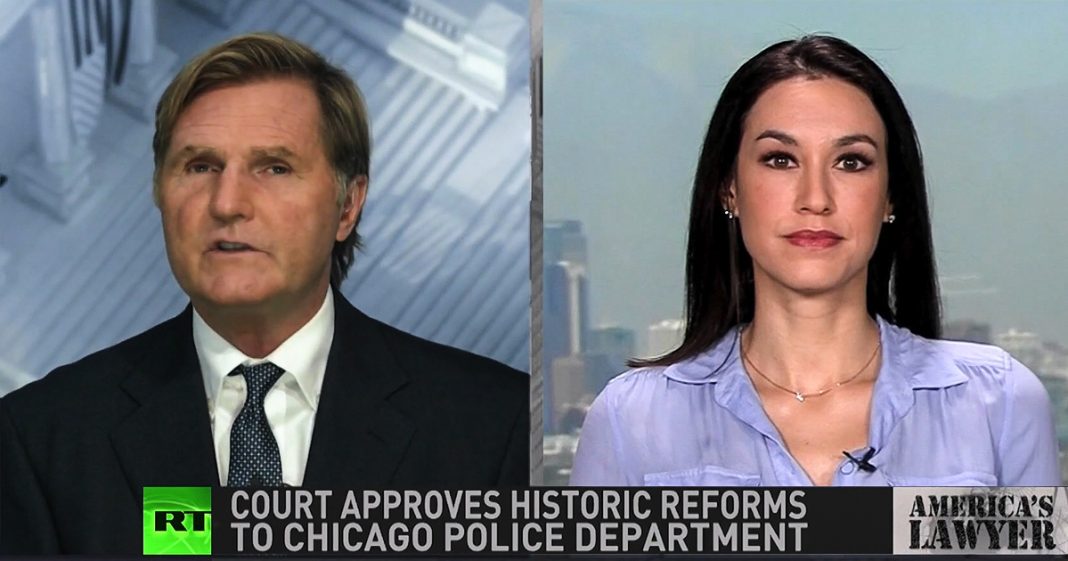 Via America’s Lawyer: Mike Papantonio is joined by RT Correspondent Brigida Santos to discuss how a federal judge has approved historic plans to change the way the Chicago police department interacts with the public.

Mike Papantonio:             A federal judge has approved historic plans to change the way the police department in Chicago interacts with the public. The new policies aimed to reform a police department that’s long been accused of violating civil rights, using deadly force in violating the constitution most of the time when they use that deadly force. RT correspondent Brigida Santos joins me now with all the details. First of all, Brigida, let’s talk about the federal judge, he’s approved these plans. What, what are the plans that we’re looking at? What are the big changes that this judge is willing to approve?

Brigida Santos:                   First of all, the changes have been proposed since 2014 after a dash cam recording showed Chicago police officer Jason Van Dyke, shooting teenager, Laquan McDonald 16 times resulting in his death. The officer was convicted of second degree murder and sentenced to over six years in prison, but that case spawned massive protests across the city and earned a response from the Justice Department calling for comprehensive policy reforms within the Chicago Police Department. So now after more than a year and a half of negotiations, city and state officials have finally reached an agreement.

Now, as for what’s in the agreement, there are hundreds of changes outlined in the court ordered agreement, some of the most significant include new guidelines for how and when officers can or cannot deploy firearms and tasers. It also commits the city to ensuring that police officers fully comply with the constitution of the United States and Illinois state. It also prescribes community policing and youth engagement initiatives to build trust between officers and the communities they serve and it says that it will determine the overall effectiveness of the department based on crime reduction rates rather than by the number of arrests, stops or citations that are made.

The judge who approved this plan is now in the process of choosing a leader to monitor all the parties involved to make sure that they comply with the new rules and they’re going to be looking at that over the coming years. Now, that decision is expected by March first, and once a leader is chosen, the new rules are expected to go into effect.

Mike Papantonio:             What I like about this is when Chicago pays attention to this and they actually implement plans, it may have a really big effect on so many other large cities, police department. But it’s almost as if we’re not seeing as many, you know, we went through a rash there where it was like every week there was some type of shooting or killing that was arguably a mistake or an intentional attack on a victim that was being arrested.

Brigida Santos:                   Before he stepped down as US attorney general, Jeff Sessions denounced the plan, calling it undemocratic and an insult to Chicago police officers, stating that would impose unjustified restrictions on police officers.

Mike Papantonio:             Well, I mean, the unjustified restrictions, of course, we’re talking about Jeff Sessions here. So let’s, let’s start from square one. So Jeff sessions thinks that it’s, that it’s a little really overreaching when we train officers better. When we give them more insight into how they can avoid unnecessarily killing people Sessions, if you read between the lines, and this is not new for Sessions and you’d go all the way back to his time in Alabama, it was always, what is it Mr. Sessions that gives you such pause where it comes to saying the police department, you know, we can do better? We can build. How difficult do you think it will be for the department to roll out these reforms, Brigida?

Brigida Santos:                   It’s obviously going to be a very tough road ahead because old habits die hard, but they have to start somewhere. They’d been ordered to start somewhere and hopefully these changes are going to result in fewer police killings and building better relationships with police and the communities in Chicago that they represent. And as you said, maybe setting an example nationally.

Mike Papantonio:             Well that’s my hope. My hope is that this A, it works. B, you start seeing a really big, big downturn in unnecessarily killings or just kind of brutal arrest. Hopefully we start seeing that, but you know, you gotta give it, you got to give it to them in Chicago. They’re making a, they’re making an attempt to do it. When other large cities just want to put their head in the sand and act like this whole problem is just going to go away. Thank you for joining me Brigida.