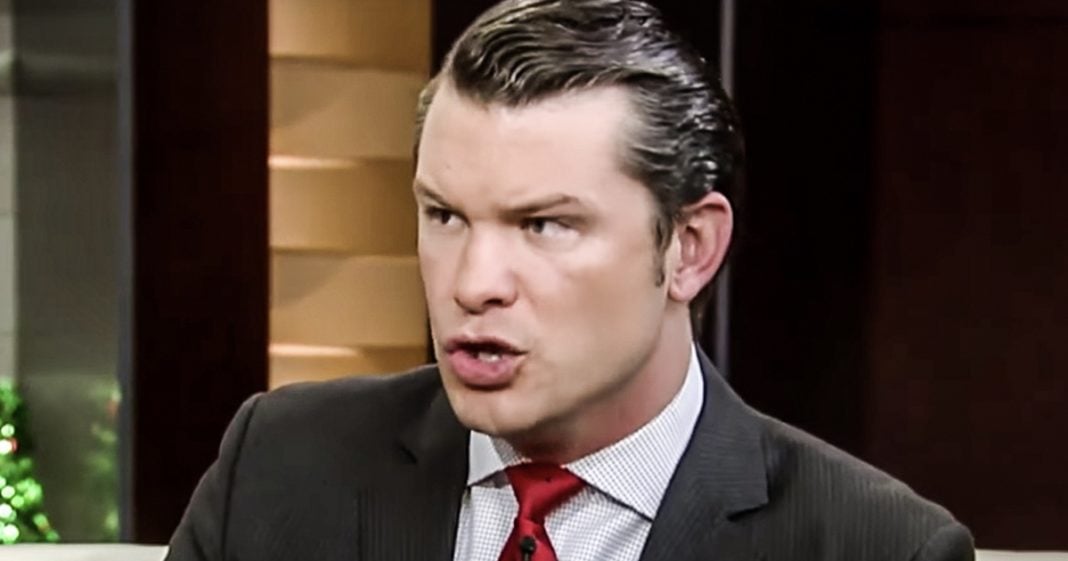 Fox News host Pete Hegseth admitted, completely unprompted, that he hasn’t washed his hands in about 10 years because he doesn’t believe in germs (because he can’t see them!) This is a form of science-denying on behalf of conservatives, and Hegseth needs to realize that plenty of communicable diseases can be spread when people practice poor hygiene. Ring of Fire’s Farron Cousins discusses this.

One of the most amazing things about Fox News is that even when they’re not talking about politics, even when they’re just chit chatting about things in life, they still managed to be the dumbest human beings on television. And we got a really good glimpse of that. This past weekend, uh, were Fox host, Pete Hegseth was eating old pizza that somebody had left at Fox News, I guess overnight, according to the other hosts. And it kind of evolved into this weird discussion about germs and cleanliness. Um, I’ll let the segments speak for itself. Here it is. Jenna di was doing a news report a short time ago and Pete had two more slices sitting right next to because he was off camera. It’s a real thing. He’s been real viewers to know this is yesterday’s pizza, that he’s just pulling it up right there. That’s not even yesterday was National Pizza Day, which means just natural pizza weekend, which means pizza hut lasts for a long time.

Pizza hut yesterday, and raw joe. So basically anything that’s not nailed down, you’ve got to just take the, take the mugs off the table. He might take, as I told him, why not 20, 19 resolution is to say things on air that I say offer. I don’t think I’ve washed my hands for 10 years. Really? I don’t. I don’t really wash my hands. I inoculate myself. Journals are not a real thing. I can’t see them. Therefore they’re not. You’re becoming immune to all of the. All the backseat. I can’t get sick. My Dad has that theory too. I’m not even trying to find a way to move on, but actually friends at Fox News Dot Com. Please comment on that because if you want to get your reaction to look at his hands, look pretty clean to me. So again, starts off innocuous enough. Pete’s standing around during the break eating day old pizza like he’s some hung over frat kid, which really honestly there’s nothing wrong with that.

Okay. Day Old Pizza. Sure. It’s fine. We’re all guilty of it really. But then the weird thing obviously is I haven’t washed my hands in 10 years in germs aren’t real because I can’t see them. It’s. It’s difficult to tell whether or not this guy’s actually joking about this, but those are his words that that’s what he said and he seemed pretty steadfast in the whole. I don’t wash my hands in germs, can’t affect me. Um, I don’t know if anybody’s ever told Pete this, but that’s actually not how it works. And yes, washing hands has been proven to reduce the spread of communicable diseases. That is an actual thing. If you are clean, you have less chance of spreading germs. You lower your risk of catching colds and flus and things like that. And sure pete can sit there and say, I inoculate myself. I don’t get sick.

I, I don’t fall ill to these human diseases out there all the time. Um, first and foremost, great. Maybe you have a good immune system, but you should also not sit there and tell your guests that they don’t need to wash their hands because, hey, look at me. I’m clean for 10 years and I don’t get sick. That’s, you know, pretty pretty horrible advice when you think about it in this also, you know, got to loop. This kind of goes back to the science denial that takes place amongst conservatives, especially those on Fox News saying that germs don’t exist because I can’t see them and that is the level of intellectual prowess I guess, that we deal with whenever we tune into Fox News, if they can’t see it, it doesn’t exist. Like they haven’t grasped the very basic concept of object permanence that we learn as infants. If the people at Fox News can’t see it, it’s not real to them and therefore cannot hurt them. And so I guess there’s no reason to ever wash your hands. Great Advice. Fox News.