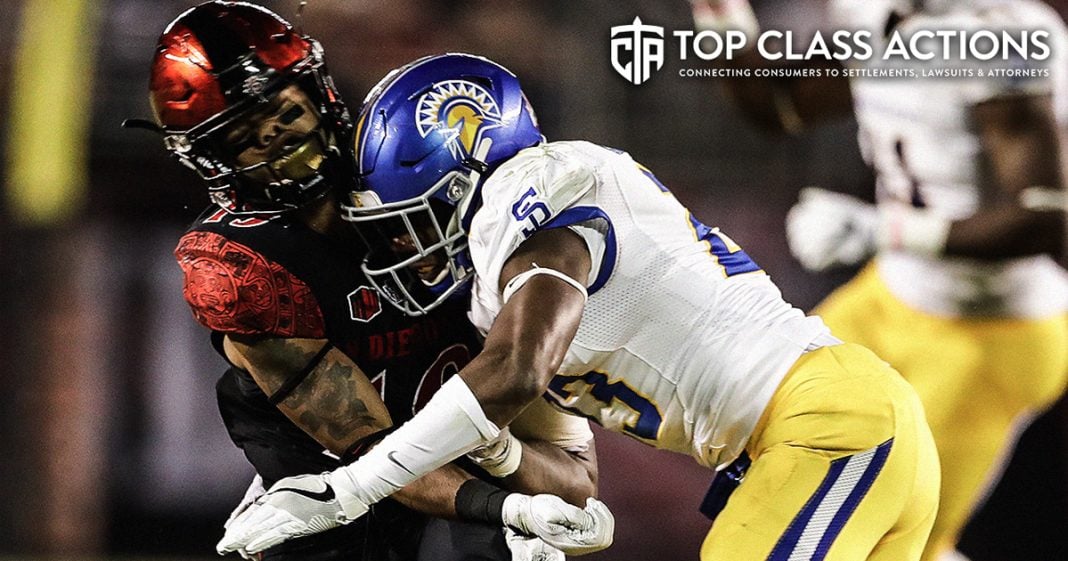 Former college football players have recently hit the National Collegiate Athletic Association with a barrage of class action lawsuits alleging that the organization failed to protect student athletes from the risk of concussions. Concussions can lead to long-term problems, including brain damage, dementia, Parkinson’s disease, and memory loss, allege the plaintiffs. Ring of Fire’s Farron Cousins discusses this with Scott Hardy from Top Class Actions.

Farron Cousins:                  If you’re a fan of football, you’ve noticed over the last few years, especially in pro football, that they have protocols in place to take care and evaluate players who they believe have suffered a concussion while playing the game. Now, obviously pro football is a lot more strict with this than college football because pro football, the NFL was hit with a massive lawsuit and part of the settlement was you’ve got to protect the players. But those are the pro folks.

Those are the guys getting paid the big bucks to go out there and getting taken care of. What about the NCAA College football athletes who do not get paid yet still suffer the same kinds of head injuries? Joining me now to talk about that is Scott Hardy from topclassactions.com. Scott, there is a new set of class action lawsuits out there, for these NCAA college football players because again, they’re taking the same kind of hits as the pros.

They get nothing out of it. They could ruin or have their career destroyed basically before they even get a chance to start their career and the NCAA according to these lawsuits, has done an absolutely pathetic job of keeping the students safe.

Scott Hardy:                          Exactly, and, and you really hit it on the head there is that the NCAA has not done a good enough job to protect these student athletes and as you said, these student athletes, most of them are not going to end up in the pros, but they’re taking abuse. They’re hitting 10 plus gs of trauma to their skulls and they’re having a lot of long-term problems. And the root of this class action is really, it’s trying to make sure that our student athletes can be cared for long past their time in the NCAA. Pass college, even if they don’t go to the pros.

If they graduated from college and they were working a nine to five job and they still suffered this trauma to their head, to their brain, who’s going to take care of them? How are they going to be able to afford long-term care? The NCAA, they’re making tons of money. The colleges are making tons of money off these student athletes, but the student athletes are just kind of left in the background and that’s what this class action is trying to fix.

Farron Cousins:                  And it’s really interesting. After the, the big NFL concussion settlement, you know, they, they put their protocols in place, the concussion protocol. So anytime there’s a player on the field, not even if they just take a hit to the head, they pull them to the side. No. Sometimes if somebody just gets up after falling and they look like they might stumble, they will pull them off the field, have the medical professionals take a look at them and evaluate them to make sure that they’re okay to go back out on the field.

They have the spotters up in the stands to make sure that they don’t miss anything. The NCAA doesn’t have that. They have, they have a rudimentary concussion protocol. But as somebody who honestly, college football season comes, that’s my entire Saturday. Me and my wife, we watch these games and I can’t tell you how many times, every single Saturday we look at a player try to get up and we say, oh my God, that kid has a concussion and they get right back in the line. They’re right back in the line.

Nobody is pulling that kid out of the game or even evaluating them. Maybe they do it after the game is over, but, but I have, I swear to you, I have seen too many kids have to go back out there, get ready for another snap of the football, and they clearly just suffered a massive head injury and that’s part of what this lawsuit is saying. You’re not doing your job in protecting us out on this field.

Scott Hardy:                          Right, because the NCAA is touting these college players. They’re making money off their likeness. They’re, they’re pushing these guys to, they’re setting, you know, deals worth hundreds of millions of dollars for coverage on different football games because of super fans like yourself. I love watching college football, but they just aren’t doing enough to protect these students and we have to have the same kind of coverage because they can afford it.

The individual colleges can afford to make sure that their student athletes are watched and if they are injured during a play, don’t just help them off the field, give them a drink of water and then send them back on there or as you said, maybe just help them stand up and get right back in the lineup. No, you’ve got to call that guy out of the game. You’ve got to make sure that they’re checked out. You have to follow some sort of concussion protocol and keep these kids safe because all they want to do is play football. But as we know, you know, playing football is very important.

We love the game, but you have to take care of these kids or else they could suffer lasting damage and you know, never get better. And this class actually goes back to 1952, so this isn’t just recent college kids that it impacts. This is going back. It could have a very far reaching effect to college athletes years and years and years.

They’re having a good time playing college football, but they know they’re, they’re not gonna make it after that or they don’t want to, which we’ve seen plenty of times. So they’re going out into the regular world, you know, they’re working a nine to five job. They’re at a bank, they start a business, they work in a restaurant, and that whole time they’re doing these other normal jobs that they got their college degree in their suffering these effects.

You know, I got eight concussions because I was, you know, an offensive linesmen and now I’m having trouble concentrating while I’m working on these transactions, you know, in a bookkeeping department. There’s no remedy. Basically, you know, these kids have had their lives destroyed and these effects may not manifest themselves for another 10, 20 or 30 years after they had happened. And that is why lawsuits like this are so important.

You know, these kids may not even realize the damage they have suffered. I’m sure, obviously the ones, you know, from the 1950’s as you mentioned, they probably know and they’ve probably gone through it. You know, those, those who are still surviving and they understand, but, but some of the younger ones, you know, maybe they’re still in their twenties, they don’t know yet how bad it’s going to be as they get older.

Scott Hardy:                          Right. They, they don’t know how bad it’s going to be and that’s why we have to take care of them today. We have to make sure that next season these kids have a much stronger concussion protocol in place that the people who are no longer playing football but who are concussed on an almost weekly basis, that they’ve got something in place to possibly care for them if they are suffering longterm damages and you know, it’s, it’s, it’s our responsibility as fans. We got to take care of these kids who are giving their all for zip, you know.

Yeah, they’re, they’re getting hopefully a free college education out of it, but they’re not getting paid. The colleges are getting a whole lot of money off the backs of these students, but all these kids are getting injured and could have life threatening problems. Alzheimer’s, you know, lots and lots of medical issues. And the NCAA has to pay the Piper, has to help these kids, because they’re the ones that are in charge of them while they’re playing and they’re the ones profiting.

Farron Cousins:                  Well, hopefully as this case goes forward, we’re going to get some better safety measures in place and hopefully that a settlement from 2014 that is still, you know, waiting to be officially, you know, approved and, and start dispensing. I think at the end of February is when that one is set. So hopefully that will also happen. But again, sometimes these things take way longer than they should have.

So hopefully things can move a lot quicker at this point. If you need more information on this particular case, follow the link in the description of this video. Head on over to topclassactions.com. Get all the information you need and while you’re there, sign up for their newsletter. It is the best way for consumers to keep themselves protected and knowledgeable about what is happening in the world today. Scott Hardy, topclassactions.com. Thank you very much for talking with me today.