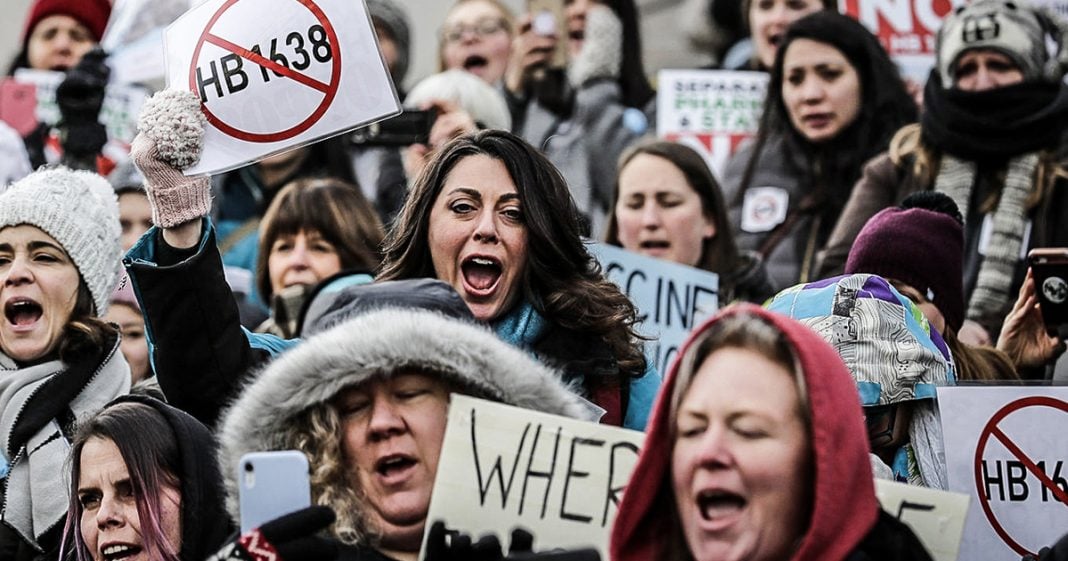 This weekend, anti-vaxxers rallied in Washington state to protest a proposed law that would make vaccines mandatory. This rally comes at a time when a measles outbreak has occurred in anti-vaxxer areas, which happens to be a disease that can be life-threatening to young children and the elderly. These anti-science folks are bringing back diseases that we had essentially eradicated, and its all based on a lie. Ring of Fire’s Farron Cousins discusses this.

This past weekend, hundreds of anti-vaxxers descended upon Washington state to rally against a proposed bill that would make vaccines in the state mandatory. Basically, what it would do is it would take away parent’s right to be conscientious objectors and not have their children vaccinated. They couldn’t do that anymore. The state would vaccinate their children is actually similar legislation in California and more legislation kind of spreading throughout the United States. And do you know what else is spreading throughout the United States right now, especially up there in Washington, measles, a disease that we had essentially eradicated decades ago is making a comeback at least 52 confirmed cases in Washington alone and dozens more suspected of this disease that can be fatal, particularly in infants, toddlers, and the elderly or people with weakened immune systems and Dhea. Know why it’s making a comeback because of these anti vaccs parents. Let’s get something 100 percent straight.

Okay? Vaccines do not cause autism. There is no link between the two. The one nude, the one doctor who made that link was later found to have completely falsified his data, was stripped of his medical license and is now the subject of ridicule for the rest of his life because he lied about the link between vaccines and autism. It does not exist and I have seen so many wonderful people on social media in the last few days make this point and this to me is probably the best point out there about this issue. Why is a dead kid or a kid with a disease that was easily preventable? Why is that better than having a kid with autism? Why are we acting like autism is some kind of death sentence or some kind of social stigma that we need to look upon these people and say, oh my God, how horrible for you.

Your life must suck in every possible way. That’s not at all how it is. Autistic people have the same odds as the rest of us have growing up to be high functioning, normal, productive members of society, and yet we’re treating this as something that’s just as deadly or as awful as having a child die from a preventable disease. That to me, honestly is one of the most disgusting things out there, but I also have to issue more statements here about the anti vaccs crowd. There is no science on your side. It doesn’t exist and I have taken many courses just in autism over the years. A while pursuing a master’s degree in in cognitive neuroscience. I actually did a lot of studies in courses and wrote tons of papers about autism itself, so I’m no expert, but I do know a lot about this particular issue.

Do you know why the diagnoses of autism increased over the years? Especially recently? It’s because we actually have a better understanding of what to identify. You know, 50 years ago we didn’t have that so kids could be autistic. They wouldn’t necessarily be diagnosed because psychologists at the time didn’t know what to diagnose it as the criteria did not exist. It does today, that’s why there’s an increase in it, not because more people have developed autism, but because we as a society, as doctors have gotten better at identifying it and being able to put it on that spectrum. A spectrum that didn’t exist 50 years ago. Very basic reading on the issue. We’ll give you this information. Okay. It’s not like some of us have access to private collections of books that tell us the truth. This is all readily available out there, but these parents, these anti vaccine people choose to live in darkness.

They choose to deny science the same way we ridicule people who deny the existence of climate change. That’s what this is. It is the same level of science deniers among these anti-vaxxers as we see amongst the climate change deniers. There is no difference in my opinion between the two of them and yeah, I know we got a lot of prominent environmentalist’s out there who were a part of the anti vaccine movement and they’re wrong and I have no problem saying that the wrong. The science is not on their side and they’re actively denying the science that does exist by coming out there and telling us that vaccines are dangerous. I suggest these people look into myelination of the nerves in the brain during development and see how that effects the increase chances of autism. Then go through and look and see if anything in these vaccines is going to affect myelination of the brain because it won’t because most of that actually happens in utero before these vaccines or even administered.

They’re denying the basic science. They’re not doing the basic research and they are all wrong and they’re putting us at risk. They are bringing back diseases that we had essentially said goodbye to decades ago because they are leading their whole crusade based solely on a report from a guy who completely fabricated everything in his study. Not exactly what you want to build a movement on. Not exactly a sturdy foundation, but the facts don’t seem to matter to any of these anti vaccine people that rallied this past weekend or that live all throughout this country and are saying, you know what? I don’t care if my kid dies of a disease that could have been prevented because everybody knows that’s a hell of a lot better than having a kid on the autism spectrum. This is disgusting, and these parents, these people out there telling us not to get vaccinated because the kids might catch autism. They’re probably the lowest of the low in American society right now.