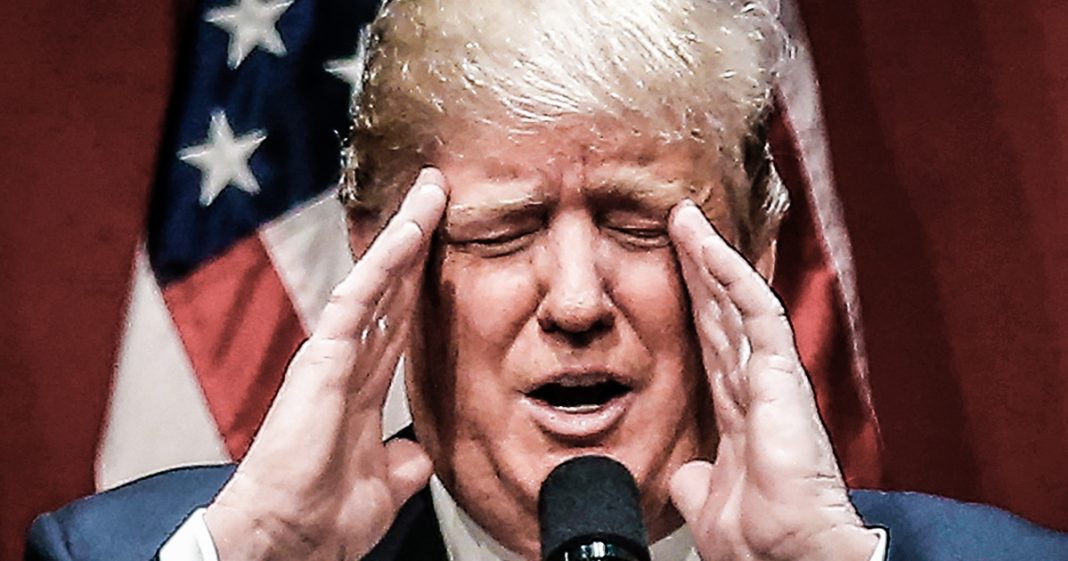 As it stands right now, nearly every facet of Trump’s life is under investigation. His businesses, his inaugural committee, his charity, his campaign, and his administration are all the subjects of different federal investigations. To make things worse, House Democrats aren’t wasting any time launching new investigations and working to give Robert Mueller vital info that Republicans had been withholding. Trump is publicly panicking about everything, and its likely because he knows he can’t withstand what’s coming. Ring of Fire’s Farron Cousins discusses this.

Donald Trump apparently learned a new phrase this week and that phrase is presidential harassment. Presidential harassment has taken the place of witch hunt and no collusion in Donald Trump’s tweets this past week and he feels like that’s the best message to be sending right now. Back away from the no collusion back away from the witch hunt. I’m going to switch it up and say, this is presidential harassment. And considering this man is, uh, being accused by more than 19 women, he sure as hell knows what harassment looks like. But here’s the reality of what’s happening right now. Donald Trump is absolutely panicking. The guy is losing his mind because right now every facet of his life is under investigation. His campaign, his administration, his organization, his individual organizations that keep hiring illegal immigrants with phony documents for some reason, uh, his charity, his inaugural committee, all of his friends, his personal lawyer as campaign staffers, his children, his son in law there is nowhere.

And I mean nowhere that Trump can’t turn in his life without running smack into an investigation. And it make things so much worse for them. This week, Democrats are back in action in the House of Representatives. They’re requesting documents. They’re seeking his tax returns. They voted this week, the handover transcripts from Don Jr, Jared Kushner, Lewandoswki, hope Hicks, and all kinds of other folks. They’re handing those transcripts unredacted over to Robert Muller, something Republicans had stopped them from doing for two years. Well, they can’t do that anymore. They had sent her some of those transcripts. They were heavily redacted so he couldn’t see everything. Those days are over. Those transcripts are on their way. If he doesn’t already have them in his hands, and that’s not going to bode well for the Trump administration. They’re looking into some of his appointment. He’s. They’re looking into whether or not members of his inaugural committee, we’re taking foreign money or we’re somehow paid off for special favors from business leaders.

There’s a lot to be investigated here. Is all of it going to bear fruit now? Is most of it going to bear fruit? Yes. You would have to be nuts at this point to look at a guy like Donald Trump. Look at all these investigations, look at all of these credible people launching the investigations to think, oh no, he didn’t do anything wrong. No, everybody the guy has been associated with has gone down, either been convicted or they’ve gone ahead and pleaded guilty to committing crimes. You don’t hang around with a bunch of criminals if you yourself aren’t a criminal. That’s just not how the world works and that’s why Trump is freaking out. That’s why he’s come up with this new phrase, presidential harassment, but what he considers harassment is really just the accountability. This is what we should be doing. This is what Republicans should have done for two years, so Democrats didn’t have to waste their time on it. If something looks fishy, something that could be compromising for the president of the United States, then look into it, but they refuse to do it. They protected him, and when this is all over, Trump isn’t going to be the only one looking stupid. Those other Republicans who tried to cover for him for two years, they’re going to be just as guilty when all of this is said and done.