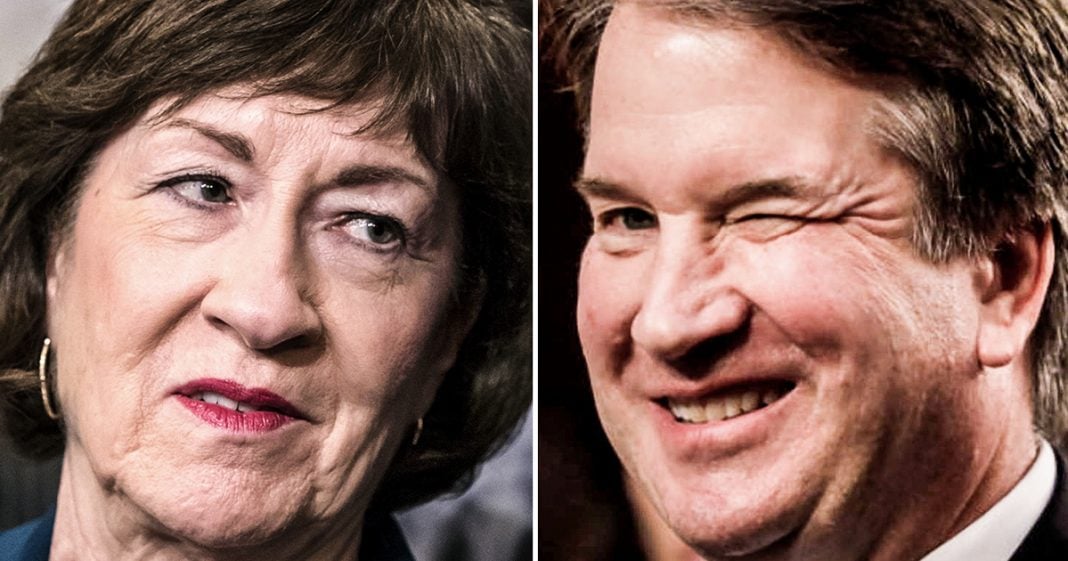 “Moderate” Republican Senator Susan Collins has received nearly $1 million in campaign donations from out-of-state campaign donors since she decided to show her true colors by voting to confirm Brett Kavanaugh to the Supreme Court. Collins is no moderate, and there are no voices in the Republican Party that are going to rise up and become heroes. Collins is just as bad as the rest of them, as Ring of Fire’s Farron Cousins explains.

You know, I remember sitting there on my computer watching the live stream of the votes about whether or not Brett Kavanaugh was going to become the next supreme court justice or if they’re going to be enough Republicans doing the right thing, it voting against him. There was no doubt in my mind that the Republicans would not do the right thing and that they would in fact confirm him and unfortunately my fears were confirmed and the Republicans did. Specifically Maine, Republican senator, Susan Collins. She was the one that a lot of people thought, you know what? Maybe that Susan Collins, you know, she’s, she’s been a moderate. She’s been a maverick. She stood up to Trump. She stood up to Kevin all, there’s no way she’s going to vote for him, and then of course, yes, she, she voted for him because that’s what she does. She is not a maverick.

She is not a moderate. She’s a Republican and they’re all the same. Same thing with Jeff Flake, who also voted for Cavin. All that. That’s what they do. They talk a big game. They try to straddle the center, trying to get everybody to love them, and then as soon as they have the opportunity to do the right thing, they go right back and do what every other Republican does. They vote with Trump, they vote for Trump, they do whatever Trump wants them to do, and it would be the same regardless of whether or not Trump is in the White House. They follow each other like lemmings and Susan Collins is no different. The only thing is though, according to a new report, Susan Collins cashed in on her vote from capital in the quarter, the financial reporting quarter that followed her vote to confirm cavenaugh. She raised one point $8,000,000, one point $8,000,000.

That was actually the best quarter of her entire career. One point $8,000,000. To put that into perspective, you know how much she raised the quarter before that, $140,000, 140,000 and then the three month period after that you get one point 8 million and you know what fueled this out of state money. According to new financial disclosures, nearly $1,000,000 that Susan Collins received over the last three months came from out of state donors. People who have no business in Maine, people who don’t get to vote in Maine, they’ll never be able to vote for Collins. She’s not there senator, but they damn sure wanted to give her money as a way of saying thank you. Thank you for putting this horrible human being on the US Supreme Court. Thank you for putting another corporatist on that high court so my business can pollute. We can extort. We can screw over everyone and now we know that the high court has our back.

Thank you Susan Collins. Here’s $2,000. She knew what she was doing. She knew what she would get out of this and she is 100 percent reaping the rewards. But here’s the thing, yeah, she may have just gotten one point 8 million, but Susan Collins is up for reelection in 20 slash 20. Can we get a good challenger up there? Can we get somebody in Maine willing to take on Susan Collins and who has the ability to beat her? Let’s hope so, because we’ve got less than two years left to figure that out. But Susan Collins is no different than a Mitch Mcconnell or Lindsey Graham. It’s just that she’s a little bit nicer about it and a little bit better at convincing the public that she’s actually a moderate, even though, again, she’s no different than every other disgusting Republican sitting in that Senate today.