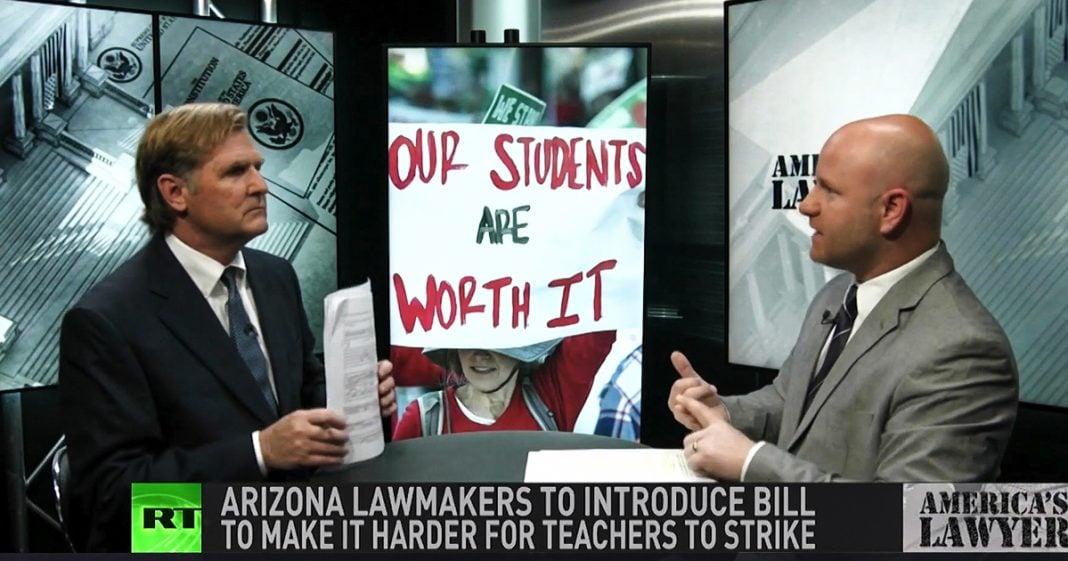 Via America’s Lawyer: After several very successful teacher strikes across the country, the state of Arizona is trying to make it virtually impossible for public school teachers to go on a strike. Mike Papantonio and Trial Magazine Executive Editor Farron Cousins explain more.

Mike Papantonio:             After several very successful teacher strikes across the country, the state of Arizona is trying to make it virtually impossible for public school teachers to go on a strike. Wow. You know this, this look, this involves, you look at Oklahoma. You look at Arizona. It’s almost like the politicians that are they, they want to take away the teacher’s right to speak. I mean literally to speak. They want to get to the position to where it is, it’s almost criminal conduct to go on strike, but teachers are fighting back. Tell us how.

Farron Cousins:                  Well right now, and we have seen this for several months now, this Red for Ed campaign. Teachers are walking out. They’re striking because they need smaller class sizes. They’re overloading them with kids and they cannot spend enough time with each one to give them a proper education. They do not have the supplies that they need to be able to teach our kids.

They’re getting, you know, horrid wages. And, and listen, I can tell you this from personal experience. My wife is a special education teacher. She spends at least $100 out of her own pocket each and every month to buy supplies for her classroom, reams of paper markers, whatever it is she has to do that. And now under new tax law, we don’t even get to write that off anymore.

Mike Papantonio:             Farron, how have they become the villain? You know, right now where you’re going, where this is going is it’s, it’s okay to fire teachers for virtually anything if they appear in these, this is what these legislators want. If they appear at a civics event and they make a speech about how we’re underpaid and how we’re not being treated right and now we should walk out, teacher can be gone.

Mike Papantonio:             But it’s, it’s a lot more involved in that. How have they become the vic, I mean, have they become the bad guy here? That’s what these, it’s almost as if these legislators have never taken a civics class themselves to understand the constitutional risk in what they’re doing here.

Farron Cousins:                  Well it’s, it’s an extension of the attack on unions because that’s what they’re mad about. They’re mad that teachers can still unionize, that they can still collectively bargain in the, and that they’ve been successful with that. And when you look at the success of these teacher strikes, the massive one in California a couple weeks ago, they got all of the results that they were looking for and that’s how organized labor in the United States used to be fighting against corporations. But these teacher unions really are the last big union power here in this country.

Farron Cousins:                  And they are, and it’s because of laws like this, Arizona, Oklahoma saying, if you talk about politics, you are fired. If you do not show up for work, you don’t have a job to come back to the next day. You’re gone.

Mike Papantonio:             If you show up and give a speech that we don’t like, that sounds like it’s talking about a walkout, you’re fired. I don’t see an end to this because the level of sophistication of some of these legislators is so bad. They haven’t taken civics classes. They don’t understand constitutional law. Thank you for joining me. This is a story that I think this year is a story that’s really going to heat up. You’re going to see teachers that say, you know what, I don’t care. I’m out of here. Thanks for joining me.