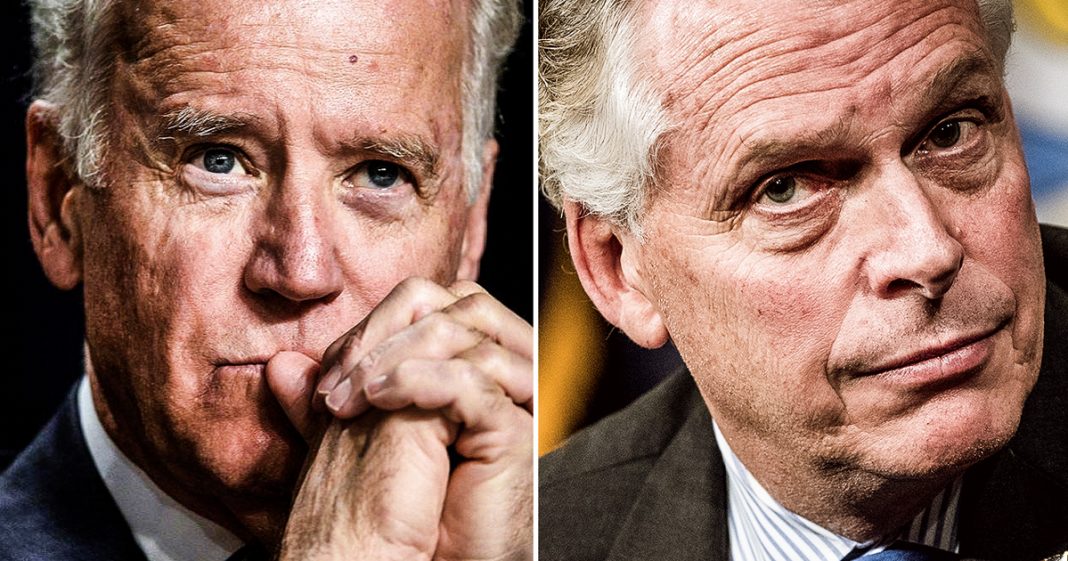 According to reports this week, some moderate Democrats like Joe Biden and Terry McAuliffe might not be entering the Presidential race for 2020 because they are scared about their own records and how to square that with the publics’ leftward shift. This is a good thing – moderates need not apply. We need strong, fast change in this country and we will not get that with moderate Democrats. Ring of Fire’s Farron Cousins discusses this.

Well, more and more and more and more Democrats continue entering the 2020 election, which by the way is a good thing. I am in favor of a big, broad primary with lots of different people to choose from so that we actually have a good selection, a nice variety of people representing different backgrounds, different cultures, different political beliefs so that we’re able to make a better decision and get somebody who truly represents what we want us in public. And I’m 20 seconds in and I’m already way off topic here. So back to the point, we’ve got a lot of Democrats that have already jumped into the 2020 election, but there is some good news. Some of the worst ones are actually starting to rethink their decision of possibly running for 2020. And here’s what it is. Axios reported a few days ago that some of the more moderate, you know the centrist Democrats.

You’re Michael Bloomberg’s, you’re Terry McAuliffe’s, and probably even your Joe Biden are now having second thoughts about entering the presidential race, either as a Democrat or an independent in Bloomberg’s case, because they see how far left the entire American public has shifted, not just the Democratic Party, the entire American public, including those on the right, because when you strip an issue away from a politician, even Republican support, things like Medicare for all increased wages, debt free college, a green, new deal, and that is terrifying to the centrist Democrats like McAuliffe, the independence, like Bloomberg and yes, even Joe Biden, because according to this report from Axios, Biden is now being advised to delay any announcement of entering the 2020 race until they get a better sense on whether or not this socialism thing is, is what the public really wants. Because if it dies down in the public, backs off it Biden’s coming in, but if the public continues to lurch, left and say, we want these once radical ideas, Biden may not run.

Biden may say, I can’t do that. That’s not who I am, but I see where the party’s going and I respect that so I’m not going to get in there and honestly honestly would be the best thing Biden could do at this point. That would be the best thing. Another thing that’s terrifying, these centrist Democrats, there’s polling coming out of Iowa that shows that socialism has a net positive approval rating. Well, capitalism has a net negative approval rating. The American public is speaking loud and clear, and again, this is people on both sides of the aisle. Okay? This is not just a Democrat phenomenon. These are Republicans are saying they want it to. We want them Medicare for all. We want the $15 minimum wage debt free college and a green new deal in action on climate change, in any expanded social security and all of these great things.

We want the government to work for the people is what they’re saying because right now it doesn’t and it hasn’t for a very long time. The government, since the days of Reagan has worked for corporations and nothing has changed since then, other than taxes for the wealthy. They go up, they go down, Democrats attempt to raise them sometimes. Maybe they’ll repeal it, but they usually end up not doing it and we all get nothing. The rich get better tax breaks. We get nothing, and we’ve gotten nothing since the Reagan days. They’ve killed our unions. They’ve killed our wages. They’ve shipped our jobs over the seas overseas with the bad trade deals. Nafta from Clinton, Cafta from Bush, almost TPP from Obama. You know, pipelines running through our country polluting everywhere they go, corporate toxins going into our waterways while we’re deregulating them and not holding them accountable.

The public left and rights as enough of this shit. Enough, we’re done. We’re done. We want a government that goes out there and says, hey, it’s dumped a bunch of cancer causing chemicals in here. We’re going to have to throw you in jail. Hey, the American public is dying because of the massive costs of healthcare. So we’re going to offer everybody Medicare. Hey, people aren’t being paid a living wage and have to work two or even three jobs just to be able to afford rent and food, so we’re going to raise the minimum wage to $15. Hey, the planet’s dying because of our addiction to fossil fuels. We’re going to stop that right now and reverse the course before it’s too late. Everything I just mentioned is what a majority of people in this country again, left hand, right? There’s what a majority of them want, and these centrist Democrats who are now getting cold feet, they understand they would never be able to offer this because that is not who they are. That is not what they want to do, but at least they have enough sense to say then you know what? Maybe being president is and for me, after all.