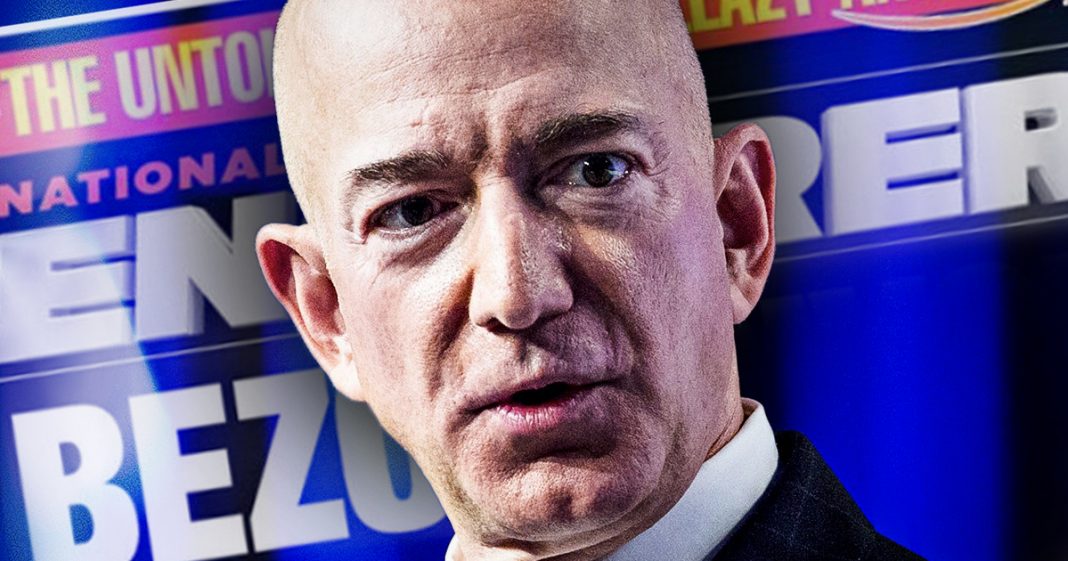 Jeff Bezos believes that the National Enquirer’s publishing of text messages between Bezos and his mistress was politically motivated, and that there could have been government involvement in handing over the text messages. Bezos had hired an investigator to look into the matter, and that’s when the Enquirer threatened to blackmail Bezos. Could Trump have been involved? He certainly hates Amazon with a passion, but is that enough evidence? Ring of Fire’s Farron Cousins examines this bizarre story.

Over the years, we’ve had to cover some pretty bizarre stories here at ring of fire, uh, just this past week. We’ve had to cover bizarre stories here at ring of fire, but I honestly can tell you, I don’t know that I’ve ever had to talk about something as odd as what I’m about to have to talk about. And this is of course, the story of Jeff Bezos, the Amazon founder, owner of the Washington Post, believing that Donald Trump is somehow pulling the strings with the national enquirer to black male Bayzos by threatening to release pictures of his penis if Bezos doesn’t call off his investigators who are trying to figure out how the national enquirer obtained Bayzos his text messages between him and the woman he was having an affair with. Now, if all of that seems like an Alex Jones style conspiracy a, it’s because this is a pretty wacky story. I mean, honestly, I feel like I need a Glenn Beck chalkboard behind me to draw the circles and lines.

And this guy did this with this and this woman over here had the. This is insanity. But unfortunately, this is the state of the United States right now, and everybody’s out there talking about Jeff Bezos, his penis, and I don’t want to have to talk about it, and I do because he’s trying to implicate the president of the United States as the person who may have intercepted the text messages between him and the woman is having an affair with and given those to his buddy David Pecker at the national enquirer, and now they sent these threatening emails to Bezos that he published on Thursday of this week threatening to blackmail him if he didn’t call off his investigation team led by Gavin de Becker, who was looking into how the national enquirer got these text messages. Now that the ridiculous it is out of the way. Let’s actually examined some of the facts here.

First and foremost, Gavin de Becker, he is a well respected investigator. He handles a lot of stuff for Hollywood celebrities when they have blackmail threats, stalker threats, things like that. This is what this guy does for a living. He’s been investigating how the national enquirer got their hands on those text messages. After all, text messages are a little bit harder to hack into an obtain then an email or then a facebook private message or a twitter DM. Text messages are very difficult to get unless of course you happen to be the NSA or happen to control our intelligence communities. That makes this story not so crazy actually because we do know that government agencies do have the ability to do that. We do know that Donald Trump is in charge of those agencies and we do know that Donald Trump is a dirty bastard who likes to threaten his competition, and more importantly that he absolutely hates Jeff Bezos with every fiber of his being.

He is attacked Bezos and Amazon as allegedly destroying the post office. When in reality they’ve kind of helped the post office continue to survive. He attacks. Bezos is Washington Post because the Washington Post constantly prince bad stories about Trump. That also happened to be true. There’s a lot in the posts that’s crap and garbage and sometimes not true, and they pushed for war constantly, but nonetheless there Trump stuff tends to be pretty spot on, so Trump hates them, but the question now remains, does Trump hate bayzos enough to abuse his power to have the NSA or whoever it is, intercept his text messages, then get those and then hand them off to his buddy, pecker over the national enquirer. That’s what Gavin de Becker was trying to figure out and pecker said in the emails or whoever it was that sent him from the national enquirer to Bayzos said, if you don’t call off to Becker, we’re releasing the pics of your genitalia.

So that’s where we are with all of this. It may be it’s a crazy conspiracy, or maybe it’s one of the most egregious abuses of power we’ve ever seen from an American president. I honestly, at this point, don’t even care which one it is. I just want this story to go away. If Trump abuse this power, fantastic. We will deal with that when the time comes, but until then, let’s just hope that none of us ever have to do another story. Talking about Jeff Bezos is a nether regions, and hopefully all of this can go away very soon.