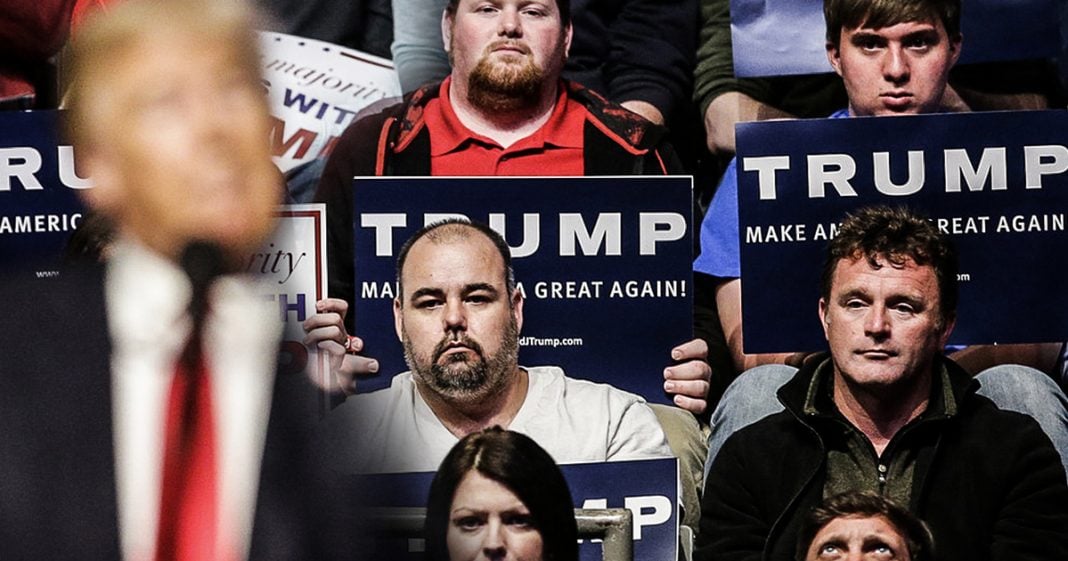 Trump voters have taken to Twitter to express their outrage over the fact that they aren’t getting those lofty tax cuts that the Republicans promised them. When the legislation was passed, middle class and working class Americans were told that their taxes would go down starting in 2019, but so far those returns have not materialized, and some hard working people are actually paying MORE in taxes under the new plan. Ring of Fire’s Farron Cousins discusses this.

Well, now that the government shut down, as over in the IRS appears to be working again, people are starting to file their taxes, both Democrats and Republicans alike. And what a lot of Trump supporters have found out is that, oh, they didn’t get those republican tax cuts like they were promised just 15 months ago. Now, if you’ll remember, Republicans told us, an analysts told us in economists told us that the tax cuts immediately went into effect for the, for the top one percent, right? They, they got their tax cuts immediately. It was an accent at the end of 2017, they got the IRS for 2018. The rest of us, we had to wait another year. It is really didn’t kick in until we filed our taxes in 2019. So we weren’t going to get our paychecks, you know, blowing up immediately. Had to wait until the next year. Well, now that people are filing their taxes and still collecting paychecks, they’ve realized that they were swindled and Trump voters, Trump supporters are absolutely pissed off.

And taking to twitter to share their horror stories about filing their taxes this year. A raw stories done a phenomenal job of kind of cataloging a lot of these tweets. So I’m going to go through. I’m and read just a couple here. Uh, let’s start with this one from a a dentist. Jordan says, I am a Republican voter. I just did our taxes. The GOP tax bill costs my family thousands of dollars this year on our return due to changes thereby hitting us with the largest tax increase of our lives. We are middle class homeowners, homeowners. And you raised our taxes. Infuriating. Here’s another one, says I have to pay $2,000 more in taxes this year. What happened? I voted for you. I thought you were fixing this. Not making it worse. I thought I would get money back this year. There’s another one. Nyc Girl voted for you. Family. Have two hard working.

New York cops did taxes for years. We would pay more and get a refund at the end of the year to help pay debt. FIRSt Time in 30 years, we had to pay more in federal taxes. I’m disgusted. Another one here from Joel Services at Potus. Thank you for screwing the middleclass with your tax reform. I have never in my life. I’m 49 years old. Had to pay into the IRS until this year. We have a combined income of $150,000. The middleclass voted for you. I will not make the same mistake twice. The list goes on. I mean this. You can read more. Just follow the link in. The description is video, but there’s so many of them and now I’ve said in the past I’m going to stop showing sympathy for Trump voters voters. But listen, this, I get, okay, this, I understand. Not that I didn’t understand the others, but, but I do have sympathy on this particular issue.

These people bought into the lie that Republicans were going to give us trickledown economics and trickle down economics on this, you know, fourth, fifth try. Whatever it was was totally going to work this time. Well, it didn’t, you know, you should have known better on that part, but here’s what they didn’t realize and this is why so many people are paying more in taxes, is that we had to give the top one percent, you know, everything they wanted and the middle class we were going to get a tax cut, right? Our taxes, we’re going to go down slightly, but what they did to make up for that was they got rid of a lot of our middleclass deductions, so things in the past that we were able to write off and take a big chunk off of our tax bill. We can’t do that anymore.

The that didn’t happen for the top one percent, but it happened for us among the changes by the way, is that teachers can no longer write off the total amount that they spend out of pocket to buy supplies for their classroom. And if I seem pissed off about that, I am. I am married to a teacher who spends at least $100 every month of the year out of her pocket to buy stuff for her classroom. We don’t get to write that crap off anymore. I have not yet filed my taxes, but like everyone else in this twitter thread here, I am also likely going to end up paying more. I did not get a reduction in any of my paychecks for the last 14 months showing that I got a tax cut. In fact, because insurance prices when up again at the start of the year as they always do, my paychecks are technically less right now than they were one year ago.

I’m with you on this folks, except I wasn’t full hearty enough to vote for Donald Trump. I knew better, but I also knew better than to not believe the Republicans when they tell us anything about taxes because they’re liars, but here’s the great thing. These people get it now and so many more, so many more than just what’s in this twitter thread. They understand it, they get it, and hopefully they will never make the same mistake twice as this one. Twitter users said, this is what Republicans do. They pull you in with these lofty promises and then screw you over every chance they get. They have been proving this for decades, and finally, finally, some of these people are starting to open their eyes and realize that the Republican Party is nothing more than a party of Donald Trump’s just con men as far as the eye can see.