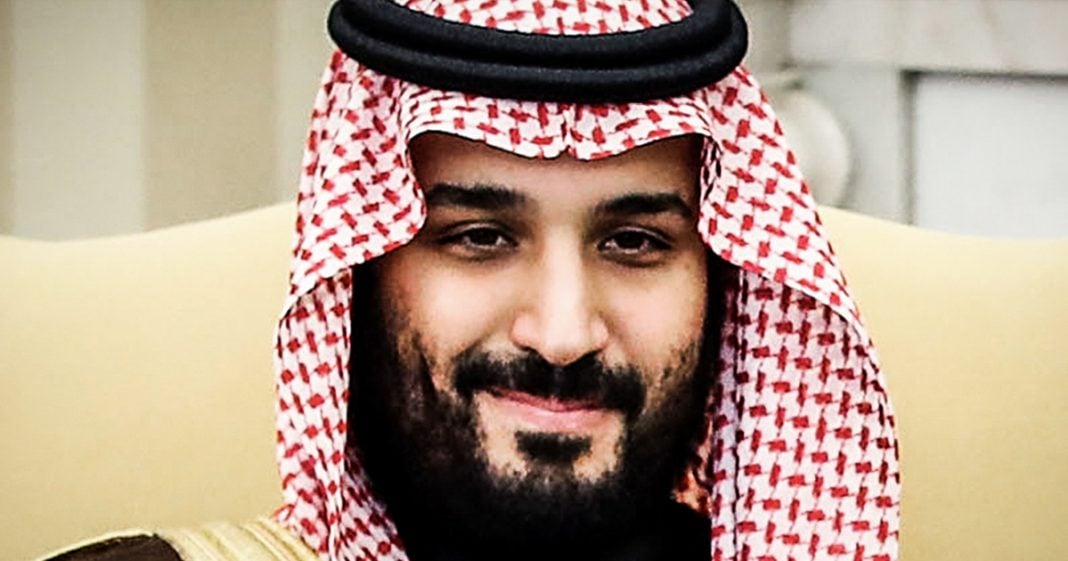 According to an explosive new investigation by CNN, weapons sold by the United States to Saudi Arabia are being handed off to enemies of the United States by the Saudis. This is a violation of international law, and also proves that we cannot trust the Saudi Arabian government to be an honest broker in any negotiation or deal. Our cozy relationship with this brutal regime has got to end now, as Ring of Fire’s Farron Cousins explains.

According to an explosive new investigation by CNN, weapons that the United States has been selling to, Saudi Arabia are finding their way to the hands of what is essentially our enemies over there in the Middle East and it’s not an accident. It’s not Saudi Arabia accidentally leaving these weapons on their porch overnight and waking up to find them stolen. It’s actively happening as the Saudi Arabian government seeks to curry favor with these factions who happen to be enemies of the United States including Al Qaeda and they are brokering deals and giving them these weapons, selling them these weapons, which is a violation of the agreement that the United States and Saudi Arabia have. We say, we will, so you are weapons. You will pay us for these weapons and those weapons remain with you. That is the deal, but now we find out according to this massive investigation, and I encourage everyone, by the way, the link to it’s in the description of this video.

It is an incredibly long piece, but take the time to read it. Take the time to read it twice if you have to. It is that important because what we’ve learned now, something a lot of us have suspected and been saying for a very long time, is that Saudi Arabia is not our ally. Saudi Arabians are not our friends. At least the government’s not. Saudi Arabia is all about money. They’re all about weapons. They’re all about power. They’re all about oppression and these weapons that they are buying from the United States and then selling to our enemies are what’s being used right now in Yemen to kill children, to kill people, fleeing violence, to force millions in the malnutrition and starvation and again, according to this investigation, they’re selling these to al Qaeda. They’re selling them to a rainy and backed a militants. They’re selling them to the a Salafi militants, all groups fighting in Yemen, killing civilians.

You know those missiles that we hear about coming from a these militia groups, killing children, killing them on the school bus targeting civilians, trying to flee the country. Those are made here in the United States. Those are our weapons. We. We sent them to Saudi Arabia because we thought for sure Saudi Arabia have never break that deal. There are good buddies. Of course they’re not. I mean here had take all these weapons. Don’t they? Don’t let that guy use it. He’s a bad guy. Saudi Arabia says, okay, yeah, you can trust us. Yeah, we’re not going to do anything, and then they turn around and they’re selling these same us back weapons, killing children, killing women, killing refugees, and killing American soldiers with our own weapons. That’s what’s happening. Saudi Arabia is not our friend. We need to immediately and irrevocably and our relationship with Saudi Arabia. Tell them we’re not going to buy your oil.

We’re not going to help you. We’re not going to be your ally. We’re not going to age. You were not going to sell you another God damn thing because everything we do for you, you turn around and use that money to spread hatred and misery and depression and death. That is what the Saudi Arabian government is all about right now. It’s what they’ve been all about for many decades now in the United States has sat quietly by aiding and abetting them because they buy a lot of weaponry from us. They buy a lot of weapons from us that keeps us going. It makes us feel big and tough. We’re selling weapons, were selling guns and these massively armored vehicles and then our troops, our kids, our parents, brothers and sisters, family members, friends. They’re the ones who go over there and then they get killed with those same weapons that we thought for sure Saudi Arabia was going to hold onto because they were good faith negotiators and they would never break our deal.

The truth is the exact opposite. They will do anything to make money. They will do anything to harm their enemies even if it means violating our agreements and even if it means getting civilians and children and US soldiers killed along the way, they don’t care. Something has to be done because Saudi Arabia is not going to change the only country that we can change his hours and hopefully this issue, the atrocities that weird now realize we’re funding and providing the the weaponry for over in Yemen. This needs to be a bigger issue in the 20 slash 20 campaigns and we need a democratic nominee who says that not only are we going to put an end to any US involvement over there other than humanitarian aid, but we’re ending our relationship with Saudi Arabia and we will never do business with them again ever.