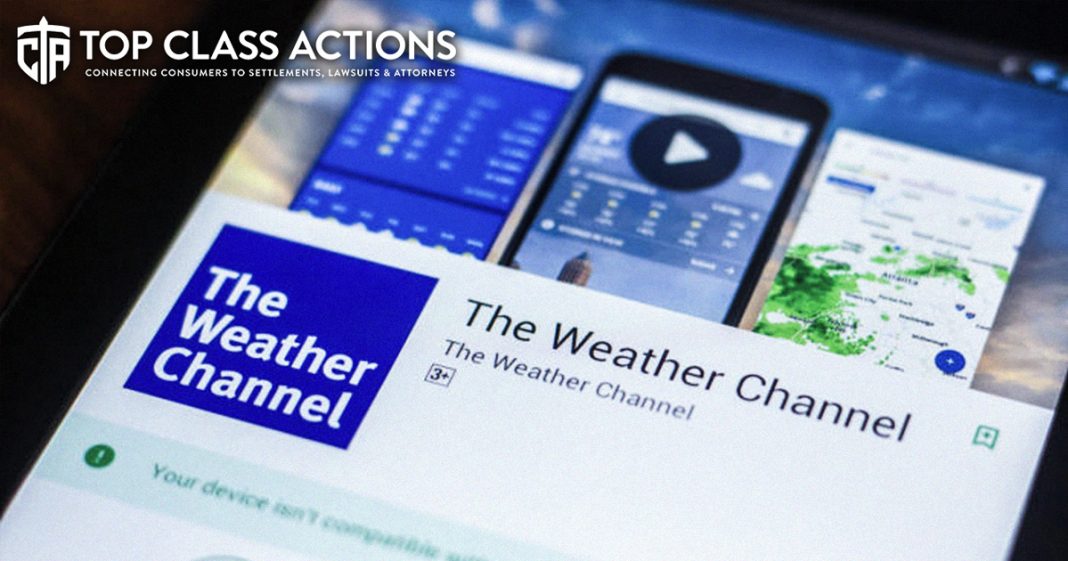 The Weather Channel app improperly advertises itself as a weather service when its primary objective is to collect and sell user data, according to a recent lawsuit. On Thursday, Los Angeles residents filed a lawsuit against TWC Product and Technology LLC, the company that runs The Weather Channel, claiming it violates California law by engaging in unfair competition. Ring of Fire’s Farron Cousins discusses this with Scott Hardy from Top Class Actions.

Farron Cousins:                  By this point, everybody should know that pretty much any of your data on your cell phone is up for grabs, for corporation, right? Any of those apps you download, if you’re on social media, we know that they’re tracking us, they’re taking our data, they’re selling it to anybody interested, but a new lawsuit in LA is actually saying that one of the apps that we really wouldn’t have expected them to be the data mining company turns out, according to the lawsuit, they might be, and that company happens to be the Weather Channel.

Scott Hardy:                          It is, it has, and the lawsuit is pretty funny because I actually used to work with the Weather Channel years and years ago, my former life in sales and go out to their campus, beautiful campus out there and I always wondered what are they going to do with the advent of the Internet and how, you know, whether it’s available for everyone. And how are they going to continue to make a lot of money like the actually do.

And now we know they’re going to mind your user data, your location data, and allegedly sell it to different companies to go ahead and start marketing directly to you based on where you are, what you do, where you shop, etc. And what’s, I found that the comment that city attorney, the city attorney for Los Angeles who filed this class action on behalf of the Los Angeles residents, he said, the company’s core business now is selling App user for a profit.

It’s, you know, for us, we always love to watch the guys sit there and be in the middle of a hurricane or in the middle of a blizzard or just somewhere where we’d rather not be and see them get slammed by the weather. But who knew that instead of actually just selling advertising on their, on their App and selling advertising on their TV channel, no, you’re actually, they’re selling your data so they can make money off of you using their App.

Farron Cousins:                  What’s really interesting, and this is what consumers need to kind of be aware of and it’s, you know, right now this lawsuit in California says it’s the weather channel App. But when you look at really any of these weather apps, they all ask for your permission to use the location services because they have to. Obviously when you pull up the App, you don’t want to have to go searching for the city you’re in.

So you use your location services and they tell you exactly where you are, what the weather is right there. But at the same time they can use that data, those location services to say, okay, well this person, you know, drives, by a Dunkin Donuts three times a day. Who finds this information valuable, because we can sell it to you and you can start targeting them with your Dunkin Donuts ads.

You know, oh, this person seems to do a lot of walking. Maybe a shoe company wants to start targeting this person for their walking shoes or things like that. And that’s, that’s the progression here. That’s what happens. That’s why this data, especially when those location services are running constantly, that’s why it is so valuable to these advertisers. And that’s how companies like the Weather Channel allegedly are able to make a ton of money selling it to corporations.

Scott Hardy:                          Yeah and we’re seeing more and more of these Apps sit there and ask for your location even though they don’t actually need it and this is the reason why, because they can take that data and they can sell it to make money and make additional profit. All these free Apps that are just sitting there using ads, most of them are also farming some sort of personal data off you so they could increase their profit. And the Weather Channel is just the shining example right now that’s been called out for having that sole purpose of selling your data and, you know, and it, it explains all the ads they have on their website along with their App itself.

But that doesn’t go ahead and pay for the huge multistory building in the Atlanta suburbs anymore. Nope. It’s going to be coming from user data that’s actually being sold. Sold these, they said to hedge funds as well to help figure out consumer data. It’s, it’s amazing what they can do with this data and who they can sell it to and what is actually worth. It’s worth a lot.

Farron Cousins:                  Right. It sounds to, you know, when you, when you bring in the hedge fund manager part of this, that this could be something they use for, you know, oh, well, you know, we’ve got a lot of users that happened to be, you know, they’re going to fast food restaurants today. Maybe we need to start putting some money into stocks for, you know, a Wendy’s or a McDonald’s. You know, just weird things like that that most people typically don’t think of, but they’re using our data for all kinds of things that we don’t know. Maybe we don’t understand it.

Maybe we’re not involved in it, but our data is, is hugely valuable to, to the hedge fund managers, to the corporations trying to advertise to us. Even for politicians, you know, they, political groups will buy up this data trying to find out where the people are. Where’s the popular place for me to go and make an appearance? All of it is up for grabs and there’s very few people who aren’t interested in purchasing it.

Scott Hardy:                          Yeah. It’s, you know, it’s not just sitting there trying to target their ads so they can, you know, make sure that you’re being pitched for a Wendy’s down the street. No, the, the mining of this geolocation tracking is huge. And with the, what I’m going to bet is millions upon millions of people who actually use this app. We’re going to an interesting settlement come through because you know, the Weather Channel can’t sit there and say, okay, we’re not going to do this anymore because they need to.

That’s what their business is built on, but we’ll probably see some additional disclaimers pop up that may change the practice of how they actually sell the data and maybe if you can put some cash in our viewers pockets, if they could submit a claim if this actually gets settled.

Farron Cousins:                  Absolutely. And this location service data industry is a $21 billion dollar a year industry. So, yeah, that, that’s a lot of money just for corporations or organizations, whoever it is to learn where you go on a daily basis. So my advice to consumers, if you’re using an App that is not 100 percent dependent on knowing your location, maybe it’s a map App, maybe it is a weather channel App. Make sure that you turn off location services.

You don’t need your solitaire game on your phone to know where you are and if possible, make sure that you set them to only use your location when you have that App open. And when you finish, make sure to properly close out of the Apps. That is one of the best things consumers can do because I know we’re not getting rid of our weather apps.

We’re not going to get rid of our maps. We need those. Those are useful tools, but you can take those certain steps to help protect yourself. And if you need more information about this case, follow the link in the description of this video, head on over to topclassactions.com. Scott Hardy, thank you very much for talking with us today.