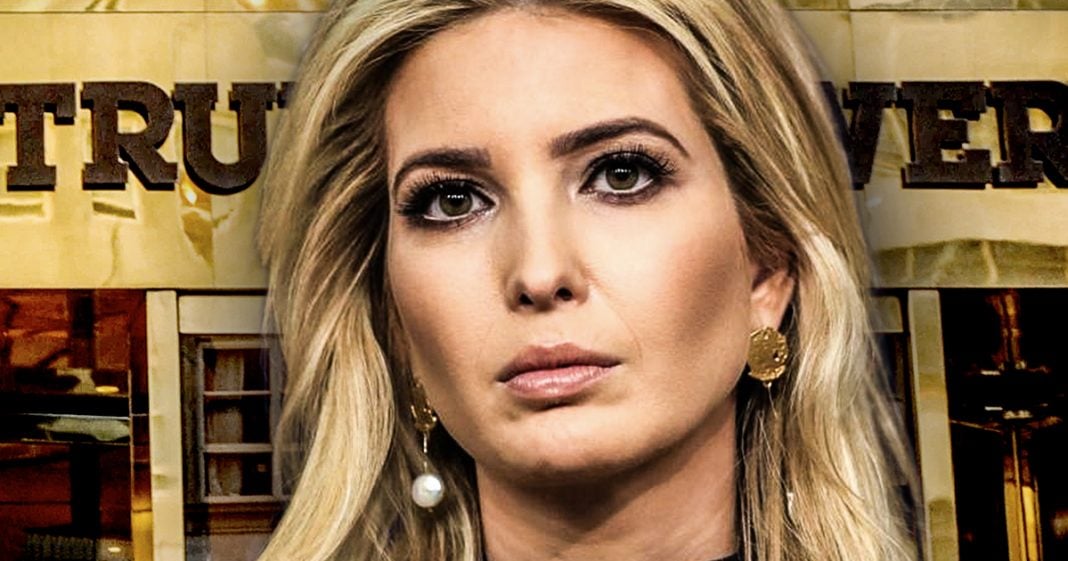 During an interview with ABC’s Good Morning America this week, Ivanka Trump insisted that she knew “literally almost nothing” about the Trump Tower Moscow project that has become a major thorn in the Trump family’s side. But, much like the rest of her family’s claims about the project, its probably best to not believe her on this, and her denials absolutely don’t sound credible or convincing. Ring of Fire’s Farron Cousins discusses this.

During an interview this morning on good morning, America, Ivanka trump tried to plead ignorance with the entire trump tower Moscow deal. According to Ivanka, she knew literally almost nothing about that entire project. Those were the three words she used, literally almost nothing. So first and foremost, she doesn’t understand how the word literally a works. She also doesn’t understand that saying almost nothing means that she didn’t know something, so not quite exactly sure if she thinks this was a denial that she knew anything or if it’s an admission that she does know something or what it is. But what really struck me about this interview was her actual response to the question about trump tower Moscow. I’m going to read this to you because I want you to hear the individual words. You know, I wanna I wanna put a little little on some of these here.

This is exactly what she said. There was never a binding contract. I never talked to the with a third party outside of the organization about it. It was one of, I mean, we could have had 40 or 50 deals like that that, that were floating around that somebody was looking at. Nobody visited it to see if it was worth her time. So this wasn’t exactly like an advanced project. You hear her say those things and there is no doubt in your mind that she knew everything there was to know about this trump tower Moscow project, the stumbling, the stammering that I. I mean I didn’t, I, that, that, that no, she knew everything. And here’s the thing. There was nothing illegal about trying to get a trump tower in Moscow. That part of it is not illegal. That’s regular business deal. You’re free to do that to an extent, you know, depending on sanctions and whatnot, but her entire family, including their lawyer, Rudy Giuliani, have chosen to lie about it instead.

And that’s exactly what she is doing here. Rudy Giuliani, it said that there was never even talked for this and yet, oops. Then after he says that, Hey, we found a 2015 letter of intent signed by Donald Trump himself to build trump tower Moscow. A letter of intent, so Ivanka sitting there saying that you know that nobody had seen the site. This wasn’t something that was even far along. Then we literally several months ago got the letter of intent and we saw your father’s signature on it. You’re lying to our faces again and you’re doing a very bad job lying to our faces. At least attempt to sound credible. At least attempt to sound like you rehearsed this because you knew the question was coming, but you couldn’t even be bothered to do that. Either that or you’re just such a bad liar that even if you did rehearse it, you still make it sound convincing.

Listen, again, nothing wrong with seeking this business deal, but why the secrecy? Why the lies? Why couldn’t they have just been honest from day one saying, yeah, we wanted to build a trump tower there. There’s lots of people there. There’s rich people. Uh, there’s government officials, US people go over there. We would like to have a hotel there so that we could make money. That’s it. That’s all you had to say. I mean that that could have possibly absolved you, except for the fact that there’s, you know, a lot of people who out there believe that there was some kind of leverage used. Maybe some deal worked out. We’ll give you trump tower Moscow, but you got to lift the sanctions against us and we’ll give you a little help becoming president of the United States along the way so that you can lift those sanctions. Yeah, that’s what’s actually being investigated right now.

Was there a quid pro quo? But the more this family lies about that Moscow project, the worst they look, the more it looks like they’re attempting to cover something up and that has always been their biggest problem. And who knows, maybe we’ll find out at the end of all this. The reason they constantly lied about everything is because there was criminal activity in all of it, but if they get exonerated on any of these points, all of these lies are still going to be lies and it’s just going to make them look like they can’t be trusted and in the future after they leave the White House. That is seriously going to destroy their ability to make deals and negotiations with other businesses when they’ve been exposed as liars and hypocrites in front of the entire world. However, this ends for the trump family. It doesn’t end well, and the more they go out there like Ivanka just did this morning and lie to us about it, the worst things are going to end up for them.