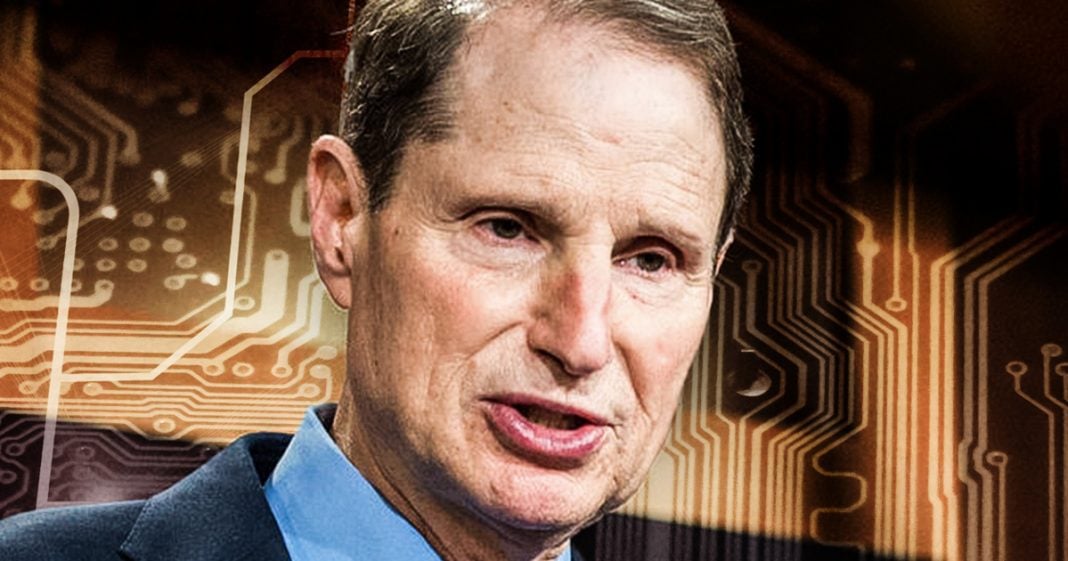 Democratic Senator Ron Wyden has put together a new bill that would actually lead to some of the biggest tech leaders in the United States facing serious legal consequences, including jail time, if their companies steal and sell user data, or allow a massive data breach to occur at their company. This is a phenomenal piece of legislation that is sorely needed in America today, and Ring of Fire’s Farron Cousins explains why this bill is necessary.

Here’s the sad reality about being online, if you have used Facebook, if you have tried to get a credit score or if you’ve had a yahoo email account anytime within the last three years for any of those things, then the chances that your data has either been leaked out to unsavory characters or just straight up sold by those corporations, the chances of that are roughly 99 percent. If you are a US citizen and you’ve done any of those three, uh, three things within the last three years, that’s pretty remarkable, right? We’re almost at almost 100 percent of us have either had our data leaked or stolen. If we’re in one of those online communities, some of us, depending on how many of those years have had our data stolen and leaked multiple different times by multiple different companies. And here’s the real kicker. Nobody’s gone to jail, no CEO, no executive running these companies that routinely lose our data.

None of them have ever faced any kind of actual consequence for this except maybe a few class action lawsuits. Democratic Senator Ron Wyden for months now has been trying to change that. And He seems to be fighting an uphill battle all by himself to get some kind of accountability for these massive tech companies that continuously take our data. Ron Wyden back in the fall, introduced legislation that would set a new standard. It would create new rules that these tech companies would have to follow with regards to our privacy and our data, and if they lied about it or didn’t do everything properly, they could face massive fines of up to four percent of their annual revenue, which would result in billions upon billions of dollars for some of these companies and possibly even jail time, jail sentences, prison for the CEOs and executives of these companies who knowingly leak our data or sell our data and then lie to us about it.

They would go to jail under Ron Wyden’s new bill that he is still pushing to this day. And again, this is a piece of legislation that desperately needs to be enacted. This is something that has to happen here in the United States. The tech companies, whether knowingly or unwittingly are giving away our data and the worst part of those who know that they’re doing it right, it’s one thing to just be bad at your job and you leak a bunch of data and oops, you didn’t notice that a hacker was in your system like a Kofax for months. Stealing people’s data and social security numbers and addresses and drivers license numbers. Oops, we didn’t notice, but it’s another to be a company like Facebook that takes your private messages and sells that data. It takes your address, it takes your interest, it takes your browsing history and sells that to people without your permission Wydens.

Bill would change that. You could opt in to a do not share list and companies would no longer be able to sell your data. You might have to pay a small fee to be put on that list, but it would then protect your data. And if the company has lied about it in their annual reports to Congress, that would be mandatory at this point. Or reports to regulator, excuse me. Um, if they lied about it, they would go to jail and they would lose a lot of their profits. Isn’t that the way this should work? If a company lies about what they’re doing to you, if they’re putting your personal data up there on the auction block without your knowledge, and then they not only lie to you about it, but lie to regulators about it. Shouldn’t that person be in jail? Shouldn’t that person be made to be an example of what not to do?

And that’s what’s missing in this country right now. It’s been missing for decades. The example of what not to do, white collar criminals are rampant on Wall Street in the tech industry, in the oil industry, the fossil fuel industry, the chemical industry. We have seen nothing but criminal behavior from a lot of these CEOs and shareholders and executives, pharmaceutical companies too. They’re about the worst of the worst and the reason they continue engaging in this kind of criminal behavior, putting out a medication that they know is going to kill people, but also make them lots of money, dumping their toxins into a waterway, knowing they’re going to poison 40,000 people, but they don’t want to spend the money to properly get rid of it. None of those CEOs or executives who made those decisions ever went to prison, and what that does is it sends a message to everybody else that it’ll be okay.

You can afford the fine. You don’t have to worry about jail time and everybody’s going to be okay. It except of course all those people you gave cancer too who are dying slow, horrible, painful deaths. They’re not okay, but that’s not used. So what does it matter? Wydens. Bill seeks to change that. At least for the tech industry. There is no reason why any person on Capitol Hill should vote against this. This is about our privacy. This is about our data. This is about our livelihoods and if you’re one of those people who have had your data stolen and then had the deal with the fallout of that, the phone calls to credit card companies, getting them to cancel, change your numbers, you know, try and get your money back from a bank after your debit card number was stolen. I’ve been through that. It is hell. And anyone who’s gone through any of that understands the same thing. The companies that allowed this to happen, they need to see their CEO’s pushed out of their pit houses, pushed out of their mansions, pushed out of the board rooms and shoved in the back of a police car. Not to be seen again for the next 10 years.