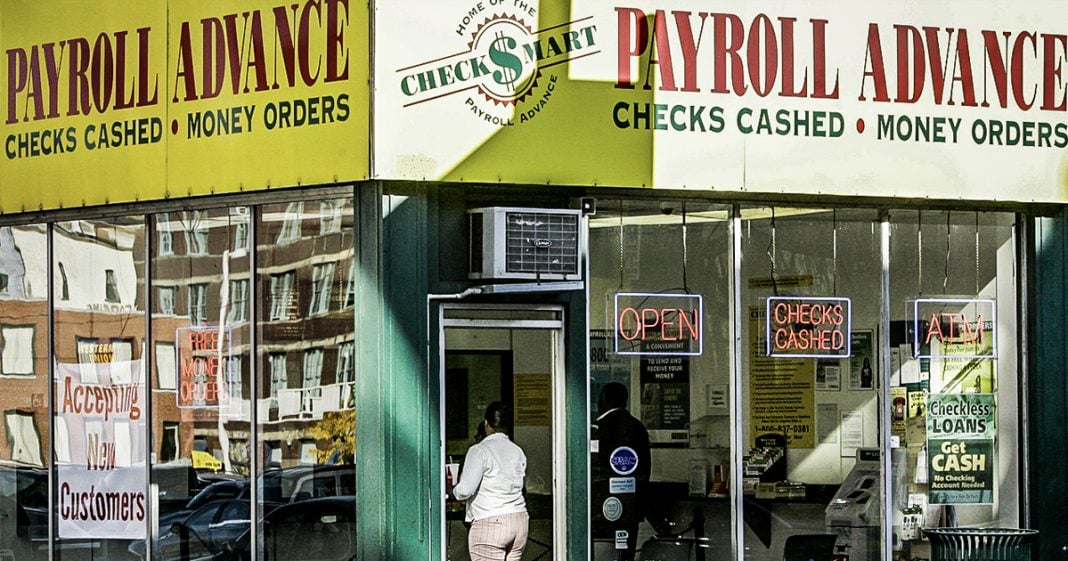 In a disastrous move, the Consumer Financial Protection Bureau has announced that they will be rolling back regulations put in place by the Obama administration that helped to curb some of the abuses being committed by payday lenders. These lenders charge astronomical fees and interest rates, trapping people in an endless cycle of debt that they can’t pay off. Ring of Fire’s Farron Cousins explains what’s happening.

Donald Trump has an unhealthy obsession with Barack Obama. In fact, the only real thing that Donald Trump has done since becoming president of the United States is rolling back all of the good things that Barack Obama did while he was president, and this week is no exception. Donald Trump’s consumer financial protection bureau announced that they’re going to be revising the regulations that Obama put in place against predatory payday lenders. Specifically, they want to take away the regulation that said that payday lenders have to determine whether or not somebody is even capable of paying back one of these payday loans before they make the loan. That helped a lot of people from entering a cycle of endless debt, which is what these predatory payday lenders had based their entire industry on. That’s what they did. They would get people to come in hand over their car title or you know, a pay stub showing this is how much they make.

They’d give them $500 and say, you’ve got one week to pay us back. If they didn’t pay him back in one week, not only were they hit with fees and interest rates, that could be up to 50 percent, but after that week they were hit with interest rates that went into the hundreds of percents trapping people in an endless cycle of debt and making that initial loan that they took out, you know, double and triple and quadruple in a matter of weeks. That $500 loan became a $4,000 loan in a month or two, and Obama was trying to put an end to that. The regulation they put in place. The CFPB said, you cannot give them money if you determine that they will never be able to pay you back, but now Trump admin comes along and says to hell with whether or not they can pay you back, loan them the money, and then go from there.

Charge them these astronomical interest rates. Go ahead and rip them off prey on the poorest communities in this country, which as we’ve discussed countless times over the years on ring of fire. That is exactly what they did. They would set up shop in poor communities and just watch that cash come rolling in, trapping people in what has been described as an endless cycle of debt and Trump’s trying to take us back to that why? Because he hates Barack Obama so much and of course the people he’s put in government, including those at the CFPB, uh, they also are good friends with the payday lenders and they want them to be able to make as much money as possible because they have also made money off the payday lending industry through their campaigns. And this is political payback. This is what you get. You give enough money to the right people in Washington DC.

They will deregulate the hell out of you so you can continue to screw over American citizens at every given opportunity in the payday, lenders knew that their day would come, all they had to do was wait, and now they’re getting rewarded. There is a positive note here. There is still with this proposed rule change, a 90 day comment period. So I encourage every single person out there to get on the consumer. Financial Protection Bureau is website. Submit a comment and let them know that this decision to change this rule will be an absolute disaster for the American economy and that you do not in any way, shape or form. Support this rule. Change our voices right now. We have a chance to be heard, so let’s not waste it.