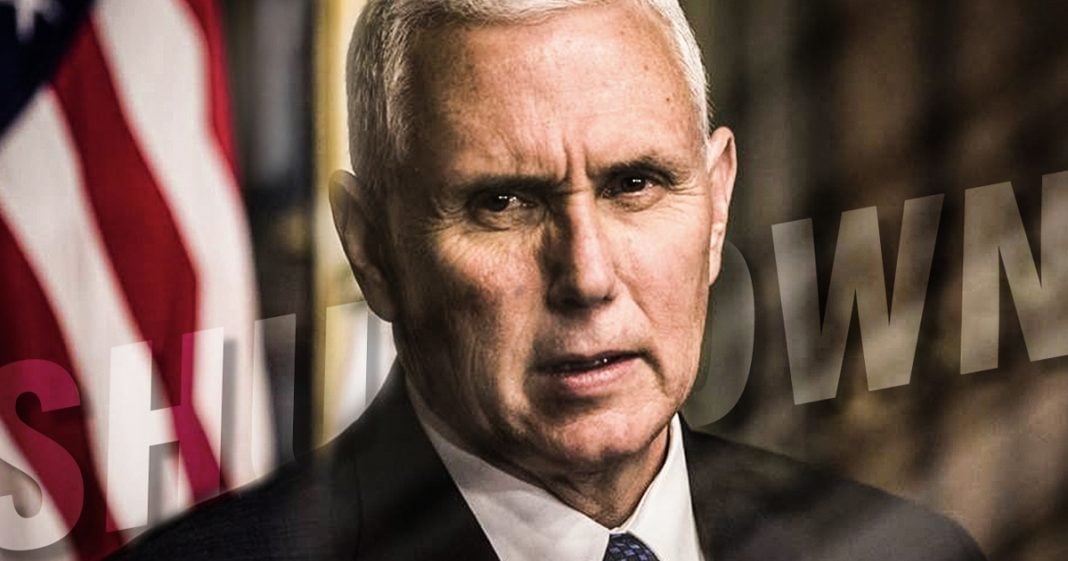 Vice President Mike Pence has made it clear that he and his boss are ready to shut down the federal government once again if Democrats don’t cave and give Trump the money that he wants for his border wall. Democrats aren’t budging, and that means that we could be just a single week away from enduring another government shutdown, complete with billions of dollars worth of economic damage. Ring of Fire’s Farron Cousins discusses this.

Yesterday morning, Mike Pence, vice president appeared on CBS news partly to talk about Donald Trump, state of the Union address from the night before, and partly to talk about the wall, the wall Mike Pence is out there saying, do in trump’s workforce say we gotta have this wall, and if Democrats basically don’t give up everything in Cavan, Donald Trump, we’re going to have another government shutdown at the end of next week. We’ve got what, seven, eight days now to come up with a deal or else mike pence assures us we’re going to have another government shutdown any word at it, you know, pretty interestingly. He said, you know, the Democrats have to come together and they’ve got to work with the president and give him what he needs in order for the Democrats to avoid shutting down the government again. So we framed it as a democratic problem and smart guys, pure evil. But again, smart move when you’re trying to avoid blame for something, but he wants us to believe that it’s the Democrats that are doing this.

The Democrats are the ones shutting down the government. Again, federal workers, you’re about to go even longer without paychecks, air traffic controllers, TSA agents, FBI agents, you guys are all about to not get paid, you know, national park employees, you probably just now starting to get all that garbage picked up from the month the government was shut down. Well, guess what? It’s going to start piling up again and you still can’t do your actual job. You know, hundreds of thousands of federal workers right now terrified over the thought of another government shutdown in here. Mike Pence is going on CBS basically threatening to do it unless Democrats completely give up their ambitions and cave to Donald Trump. Well, here’s the thing that Mike Pence doesn’t want to know. He knows it, but he doesn’t want to know it, and that is that more than 60 percent of people in this country do not want the border wall.

They didn’t, they don’t. They will not want it. So a majority of people in this country don’t want the wall and even bigger majority don’t want to see the federal government gets shut down again. And let’s not forget that Republicans this week actually voted down a measure that would give most of the furloughed workers back pay for the time the government was shut down. Republicans don’t want to pay those people. This is a Republican problem. The Democrats, to their credit are doing what the public wants. The public doesn’t want a wall, so democrats aren’t going to give him the money for it. That’s representative government at its finest folks. That’s what the government’s supposed to do. Look at what the people say and then say, okay, this is what you want us to do. Then this is what we’ll do. Mike Pence doesn’t understand that because Mike Pence is in government for Mike Pence.

Same thing with Donald trump. Donald Trump’s in government to benefit himself, not the American public, and he also has to avoid pissing off Ann Coulter again because God knows that’s going to end in disaster. At the end of the day, here’s the thing, democrats are not going to give Republicans the money for the wall. Republicans are going to end up shutting down government again and in order to avoid all the public backlash, eventually Donald Trump is going to declare a national emergency. At that point, we enter a constitutional crisis. This whether or not the president can issue a national emergency for something like this goes to the courts and we let the chips fall where they may either they reign in the powers of the president, which is sorely needed, not just for trump, for all presidents or they say, nope, you’re virtually a dictator. You can do whatever the hell you want.

This doesn’t end well for anybody, no matter which way it goes well, unless they do rain in the powers of the president, but given the conservative majority and the judiciary, I don’t know that that’s possible, but again, Democrats are actually standing up for the people here. Mike Pence is trying to stand up to the guy or for the guy who’s just afraid of Ann Coulter, which side of this fight do you really want to be on? I’m going to go with the Democrats on this one rather than the guy sucking up to the guy who’s trying to suck up to one of the worst, most hate-filled pundits on the conservative side.