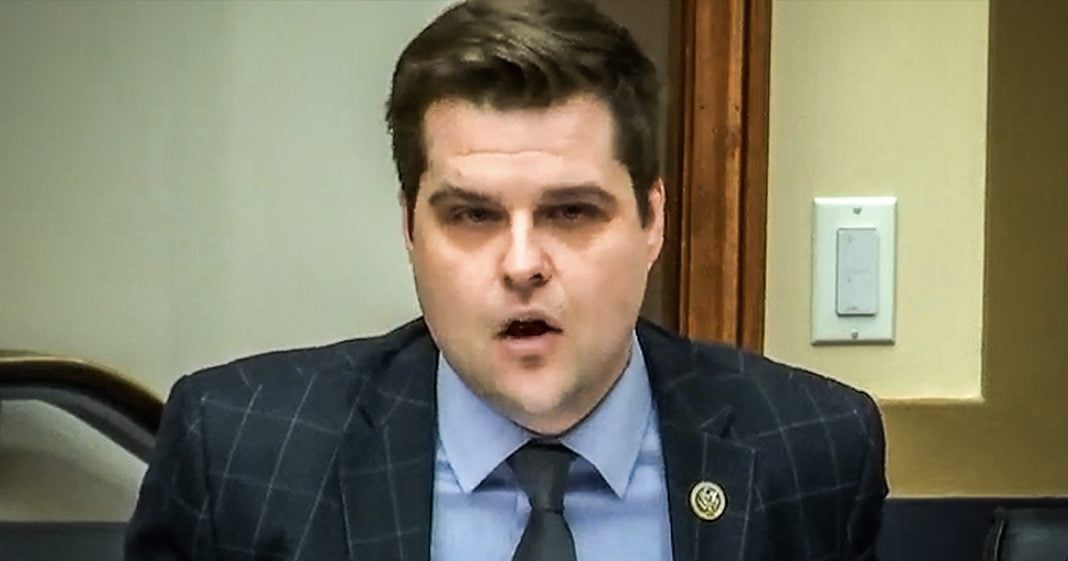 Republican Representative Matt Gaetz was part of a House Judiciary Committee hearing on gun violence on Wednesday, but after he was called out for making things up by a fellow Congressman, Gaetz decided to take out his fury on the group of Parkland survivors who were in attendance at the hearing. Gaetz made a fool of himself multiple times during this hearing, and he helped to expose the ignorance of the GOP with his outbursts. Ring of Fire’s Farron Cousins discusses this.

On Wednesday of this week, the House Judiciary Committee held a hearing on gun violence here in the United States. Unfortunately, my representative Matt Gates, the Republican from Florida’s first district decided he wanted to use his time in this gun violence hearing to talk about Donald Trump’s wall. Donald Trump, his good buddy, and it didn’t go any way like Matt Gates thought it would take a look at a little bit of selection of what happened yesterday.

It’s the chairman point of order who, who’s there isn’t, is there

rule or appointed parliamentary inquiry? Is there any committee rule that prevents a member of Congress from her sighting falls

statements in a committee hearing

Board of specious arguments. It’s a parliamentary inquiry. I’m not aware it off the top of my head. I haven’t researched this question. I’m not aware of any such rule. I would also observe that, uh, the factuality of a statement is always subject to context by someone who disagree with disagrees with it. Um, and, uh, at a hearing such as this, if a member makes a, a, of a statement that is not born out by the facts, that suit is the prerogative of another member when his turn comes, uh, to comment on that or to point out his opinion and her opinion, I suppose, through the forest city. Thank you. Mr. Chairman, chairman. I have a point of parliamentary inquiry. This gentleman was status point of parliamentary inquiry. Thank Ms Dot chairman, Ms Dot chairman.

Is there a, is there a process in the committee whereby if the very same people are repeatedly interrupting the time of the members that those people will be asked to depart the committee

So here’s the thing. Let me, let me take you back just a second here. Matt Gates began his little tirade talking about the wall and how a lot of these shootings wouldn’t happen if we had the wall. He was absolutely making things up. So the congressmen at the beginning of that video was 100 percent correct to call them out for being an absolute liar after all, they were there to talk about gun violence here in the United States and instead matt gates was making up phony stories and how a wall might solve those problems. Well guess what, Matt, as was pointed out to you in the hearing, most of the mass shooters here in the United States are white guys born and bred in the United States of America. That’s just the simple truth. And what’s even worse is that you got so flustered for being called out for being disgusting liar, that you decided to take your anger out on the parents of Parkland victims who happened to be there by invitation at that hearing.

That’s why you lashed out at them. He didn’t care that they were interrupting you or having plenty of fun talking over them and trying to make them look silly. But because you got called out and you suddenly felt very defenseless in week, you decided to pick on these people who have lost their entire world. You are a despicable waste of a human being, and I swear to God, if you were running for Congress anywhere other than this hell hole first district of Florida that I unfortunately live in, you would never get reelected again. You’re a piece of crap and you are an absolute liar and everything in that hearing from yesterday that you did proves that without a doubt.