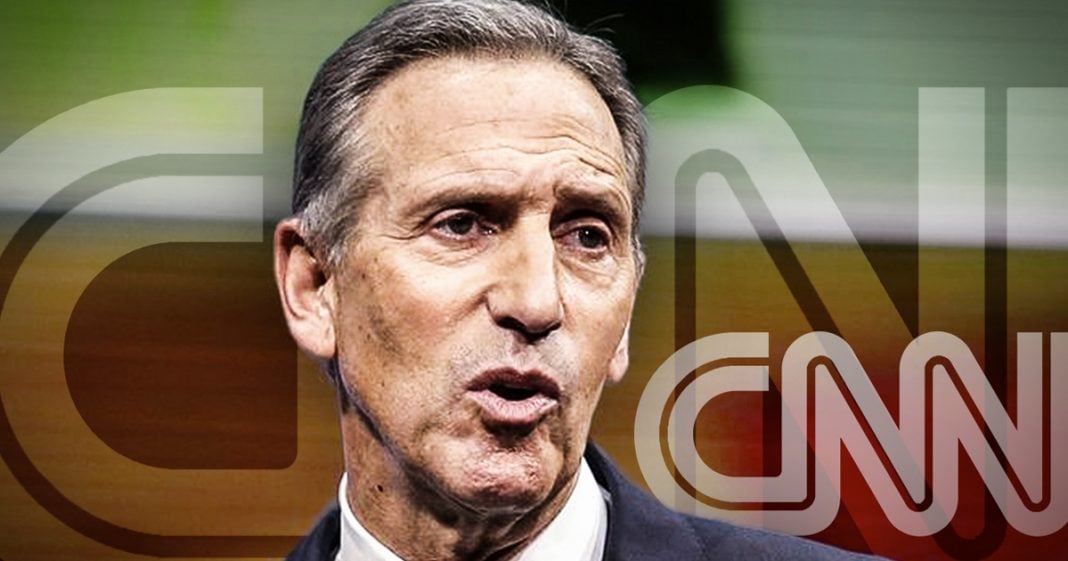 CNN has announced that they will be hosting a town hall event with billionaire Howard Schultz, even though Schultz hasn’t specifically said that he’ll be running for president yet. The network is hoping to capitalize off of the huge ratings they got from the Kamala Harris town hall, but their move just looks desperate and pathetic. Ring of Fire’s Farron Cousins discusses this.

CNN is making it clear that the only thing they care about in the world is ratings because ratings equal higher advertising dollars, and that is why this week they extended an invitation to Howard Schultz, the independent billionaire who is considering running for president of the United States. They have offered him a town hall next week exclusive, see it in town hall, just Howard Schultz in some American voters asking him questions, trying to gauge and see what kind of a person he really is. Well, we already know what kind of person he really is. He is a whiny billionaire who doesn’t want to pay his fair share in taxes and he wants to attack anyone who thinks that the millionaires and billionaires should have to pay a little bit more because they’re the ones who have benefited the most from the American system. Furthermore, CNN right now is trying to capitalize on the success that they had last week with their Kamala Harris town hall, which broke ratings records for the network, and they think they can do the same thing with Howard Schultz.

This is a pathetic ratings grab by network that is struggling to remain relevant and it’s absolutely obscene. Really. That’s the only way to describe this is that this is obscene. The man hasn’t even officially announced that he is going to run for president. Just expressed interest. Like, Hey, this might be a thing. I might do it. See it. It’s like, great sign here. We’ll get you a town hall. We’ll get you an audience will give you all the exposure in the world that you could possibly want because you’re a billionaire and therefore we love you and America should love you too. Here’s the thing. We actually have many other Democrats who have officially announced that they are going to run for president. Uh, so where’s their town halls? I haven’t seen one with Elizabeth Warren yet. Or Tulsi Gabbert or, or Castro or, you know, any of the other people who are hinting, they may run just like Howard Schultz.

Where’s, where’s Bernie’s independent town hall. You know, we’re, we’re Sherrod Brown’s. Where’s Joe Biden’s? Not that I would want to watch that, but you know what I mean. Howard Schultz is not officially running for president yet. He gets this massive platform because the network thinks they can make big bucks off of it. They think they can make a ton of money trying to shove Howard Schultz down our throats, and the only piece of advice I can give everyone in this country is do not watch it. Do not watch it. There is nothing to be gained from tuning into this town hall. If it does, in fact happen, there’s still a chance Schultz may pull out of it, especially considering the fact that he’s polling at about four percent right now, but nonetheless, CNN wants it to happen. They want you to get to know this guy, but we already know everything we need to know about him. He is a fraud. He is a phony. He is a corporatist and he is not the kind of person that we need. Running the United States of America. Two years of billionaire rule in the United States, in the Oval Office is enough. We do not need a another multibillionaire thinking that they’re smart enough to come in and solve all of the problems that this country is facing. We’ve learned over the last few years that nothing could be further from the truth.