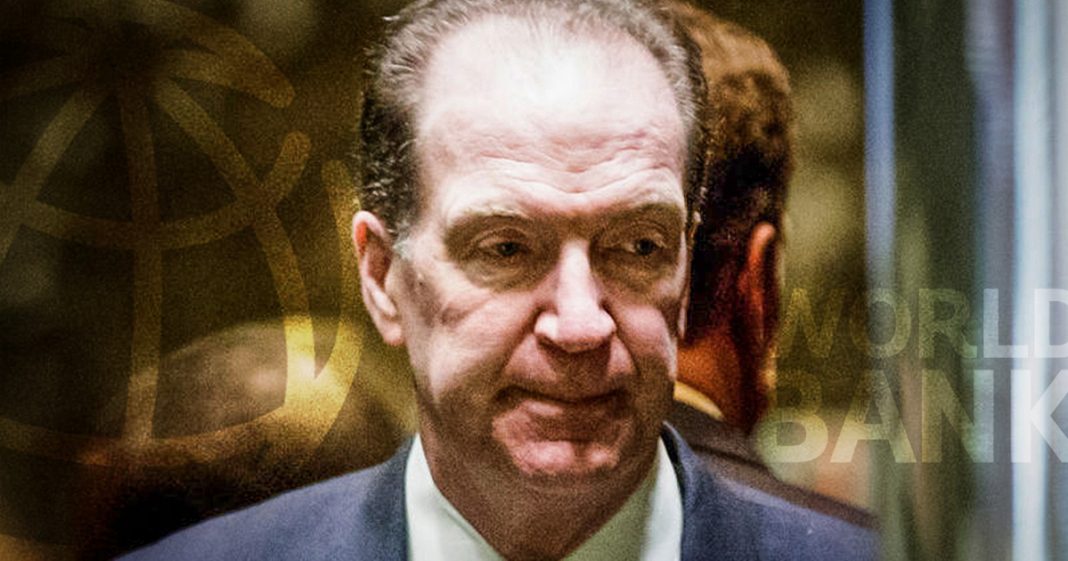 Donald Trump is set to nominate David Malpass to become the new leader of the World Bank. While most of us are breathing a sigh of relief that the rumors of him nominating Ivanka turned out to be false, the truth is that Malpass isn’t really a better choice. Malpass, in addition to giving tons of money to Republican campaigns, has also been wrong about everything about our economy for the last 15 years. Ring of Fire’s Farron Cousins discusses this.

A few weeks ago, rumors were swirling that Donald Trump was going to pick his daughter, Ivanka Trump, to be the next head of the World Bank. Well, as the weeks have gone on, other people’s names popped into that short list and now we do officially have somebody who Trump is set to nominate as the next head of the World Bank and thankfully it is not Ivanka, but unfortunately it’s somebody who’s just as inexperienced and bad at their jobs as Ivanka is. That person happens to be current Treasury Under Secretary David Malpass. Now, in case you’re not familiar with David Malpass, let me give you a brief history of who this guy is. He was one of the chief economist at bear sterns from 93 to 2007, you know, right before they went under because they didn’t correctly predict the fact that they were destroying the market and the economy and it was actually David Mal pass who gave the company’s positive outlook on the economy saying, things are great.

Everything is wonderful. Things couldn’t be better for us here at bear stearns, and that was actually just a few short months before the entire bear store, a bear stearns company collapsed. So he got that pretty, pretty wrong. He also said back in

seven and [inaudible] eight that, uh, oh, the housing bubble, even if that pops, that doesn’t affect the economy, a housing market crash won’t affect anything else other than the housing market. And it’s foolish to suggest otherwise. And then of course the housing market crashed and help tank the entire US economy. So he was wrong about that. He called for raising interest rates shortly after we got out of the recession at a time when every other economists was telling him, you’re an idiot if you think raising the interest rates is a good idea right now. He supports Donald Trump’s trade wars. He said that we were going to hit a recession in 2012.

That actually never materialized. We continued on our upward trends, but, uh, honestly, out of all these incorrect predictions and misreadings of the economy, the thing that’s the most troublesome is his support for Donald Trump’s trade wars. Now he has been a member of the Trump administration. He is one of the few people there who firmly supports Trump’s ideas of taxing to Helen back goods coming into the United States taxes that by the way, are not paid by the other countries. They’re paid by US citizens. We have lost billions of dollars because of this moron, David Malpass being in the president’s ear and telling him this is a good idea. You can trust me. Look at my history of good ideas. This man has literally been wrong about every economic prediction that he has had in the last 19 years, and now he’s going to be running the World Bank. Is this really what we want?

Is this really the best we could do, Mr Trump? The answer is absolutely not. And even though Malpaso had, did not give any money to donald Trump’s campaign, he did work with the campaign as an economic advisor, which helps explain donald Trump’s horrible economic policies, but now pass and his wife have given over $200,000 to Republicans over the last, uh, few years. So Malpaso as a heavyweight in the republican world. He gives lots of money to them and this is his reward in spite of the fact that he is an absolutely horrendous economists because he gave money to Republicans. He is about to be nominated to become the head of the World Bank.