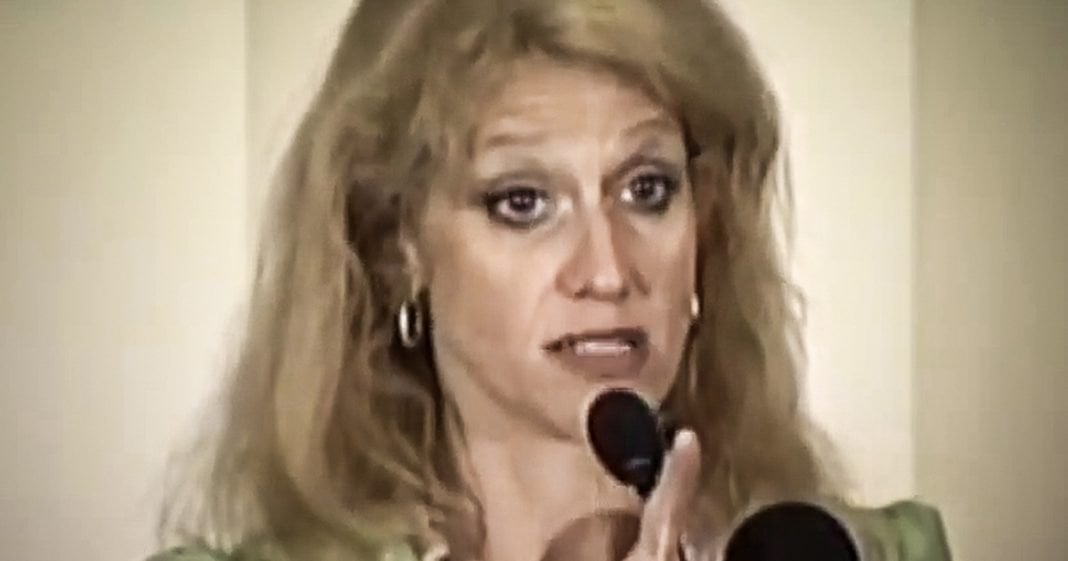 In a recently re-surfaced video from C-SPAN in 2007, Kellyanne Conway appears before the College Republican National Committee to let them know that she is tired of women talking about their reproductive health, and then she threatened to shoot women who talk about these things. This may be the most psychotic statement that we’ve seen from Kellyanne, and that’s certainly saying a lot. Ring of Fire’s Farron Cousins discusses this.

Recently his speech from July 13th, 2007 that Kellyanne Conway gave to the College, Republican National Committee has resurfaced and uh, there’s a part in this video clip from 2007 where Kellyanne gets little off topic and goes to the issue of feminist studies and she starts talking about women who talk about stem cells or, or abortions and how horrible they are and what she wants to do to those women. Take a look.

The other thing is, I always say there’s gender, there’s gender studies people. If you say abortion or stem cells or guns, one more time. I’m going to perform one of those only because you know, with a gun because you by implication are suggesting that women can do the math.

Yeah. My first reaction after seeing this video was just holy shit. Kellyanne conway just said she wants to shoot women, and she did. She absolutely just said that in that video she wants to perform abortions on feminists with a gun. That’s what she said. That’s unequivocal. She said that that happened. Now here’s the thing, there’s media, let’s say like, oh, this is just a joke. It’s just maybe as a bad joke that didn’t go over well. That wasn’t a joke. This woman was not kidding. Look in her eyes, look at her demeanor and listened to her inflection. When she says those words, she does it with this almost sense of calm, serenity, and if they say that again, I would like to perform them with a gun on one of them. That’s, that’s not a joke. That’s associate path that we were looking at a sociopath and that video, we were looking at a woman who was being dead serious about ending another woman’s life just because she agrees with her politically or because Kellyanne conway doesn’t think that women’s reproductive health as a number one issue, and then she has the audacity after finishing that little murderous diatribe of saying, Democrats think women just can’t do the math. No, Democrats think women are smarter.

Democrats think women should be able to make their own decisions. It’s Republicans that don’t think they can do the math. It’s Republicans that don’t think women should have any control over their own bodies, but you sitting there saying, you would like to shoot them. You would like to perform that procedure on them with a gun show. Not only would you be doing what you claim to hate most, which is killing a fetus, you would then also be killing a human being. Kellyanne conway is a true to life sociopath. You can see it in that video, clear as day. This is a woman who has no regard for human life at all, at any stage of human life. By the way, she doesn’t care about fetuses. Don’t kid yourself thinking she does. This is a woman who cares about power and fame and glory. She doesn’t give a damn who she has to step on, who she has to abuse or who she has to use in order to get where she wants to be, and that is exactly what she is done that’s led her to become one of the most vital members of the Trump administration.

But every time you see her on tv from this point forward, remember that clip, remember those sociopathic eyes and remember how excited she seemed almost to go out and murder women who she happens to disagree with.