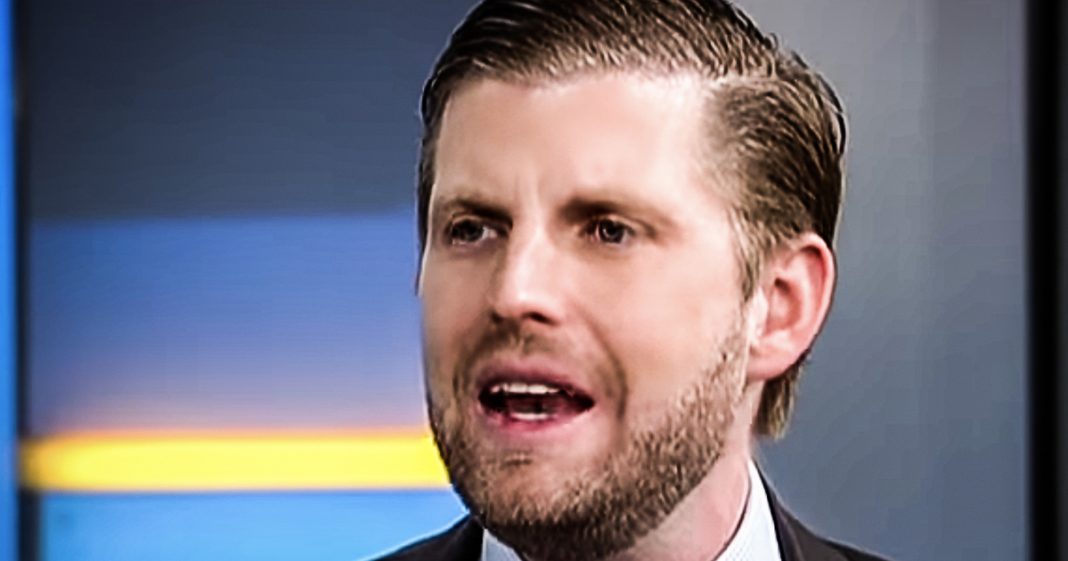 During an interview with Fox & Friends this week, Eric Trump told the hosts that his sister Ivanka was being unfairly ridiculed and that she had done more for women than anyone else has ever done. Really, Eric? This is the hill that you choose to make your stand on? Ivanka’s history is that of a woman who has no regard for other human beings, regardless of their gender, and like her father, she only cares about money and power and fame. Ring of Fire’s Farron Cousins discusses this.

Eric Trump appeared on Fox & Friends earlier this week to, uh, you know, talk about how great his dad is, but also to defend his sister against alleged vicious attacks coming from the left and in his defense of his sister, he said something that kind of made everybody in this country who saw the clip say why? Here’s the clip. See for yourself,

w we had joked that before we start the segment, we should get a shop vac out here for you because down in Washington there’s actually an exhibit where they have somebody who is dressed like your sister, Ivanka of running a vacuum around a room where you throw crumbs in front of her and then she’ll vacuum it up. You know, I want, I want to frame that image just because I think it’s important. These leftist called up a modeling agency saying, you know what? I want to get a nice woman to come stand on a carpet. So with our people, with a vacuum of all things so our people can throw food and crumbs to mimic a powerful woman who has done more for women than probably anybody in Washington DC. I mean think about that hypocrisy. There supposed to be the quote unquote, they label themselves as a party of of women, yet they’re throwing food, they’re throwing garbage at a woman on a carpet holding a vacuum cleaner to mimic somebody who really does care and who’s fought so hard for women.

And you know what guys I say, keep doing it. Keep. Keep going. Because if they’re losing people with this nonsense, with this craziness, it’s no different than, you know, these birthday abortions and everything. They’re losing people with this craziness that they’re doing. And it’s gotTa stop. I mean it’s become too radicalized. It’s, it’s actually borderline insane. Do you guys talk about it amongst each other, like when you see as a like that is Ivanka talk to you about it or when she sees somebody go after you are done junior. Do you guys talk to each other about it? I guess we take a lot of shots and that’s fine. We’re the first family United States, you know, we’re grownups. We can. We can take shots, but you know, it’s sad in this case because Ivanka has done more for women’s empowerment. I’m more for women’s issues than just about anything in, in even before she got to DC. This was a cause that was near and dear to heart. Don’t mock somebody for that. A lot of people know that there’s always going to be naysayers.

Okay. Just a second. I’m going to get into why Ivanka is actually a horrible human being, but I have to point something out. Eric Trump in that clip actually seemed more offended that his sister could be portrayed with a vacuum of all things than any of the other attacks on her. That is what I guess stepped over the line for him is implying that Ivanka could ever even use a vacuum. How dare they? I go back and watch it again and listen to how mad he is that the woman in this art installation has a vacuum of all things. That is what he said, and secondly, he doesn’t understand what the art exhibit actually means. It’s not, oh, look at Ivanka. She’s a maid. No, it. It’s supposed to symbolize Ivanka Trump constantly cleaning up the messes being left by her father and by an extension, her brothers as well, so that includes you and she does it with a smile.

She does it acting like, oh, this is no big deal. That is the point of that art installation. It’s not a dig at Ivanka. If anything, it’s showing that she’s the only one of you morons and the Trump family that’s capable of going through and at least attempting to clean things up back to reality though, right? Ivanka Trump done more for women than anybody else in d, c, anyone in this country, anyone in history, right? Forget Susan B. Anthony, forget Rosa parks. It’s Ivanka Trump who is the true hero of all women to ever exist. The same woman who uses sweatshop, a sweatshop labor to build her product lines. Is that being a hero for women? The same woman who sat idly by while her father was having affairs and after those affairs came to light, she just kind of shut her mouth instead of saying we have to stand up for families and what my father did was wrong.

I don’t agree with them now. She just sat there. She was going to be a leader on climate change, but that kind of fell through because she doesn’t know how to do it. Not that that necessarily is only a women’s issue, but it’s a humanity issue. Ivanka Trump has failed at every given opportunity. You know when the access Hollywood tape came out, she wasn’t leading the charge to get her father to come out and publicly apologize for that. Was She? I mean that was degrading towards women. What about the 19 plus women who have accused her father of sexual misconduct? Where does she stand on that? Where she’s standing up for those women? Ivanka Trump hasn’t done a damn thing for women in this country. Eric. Not that you would understand because you don’t live in reality either. Your the guy who ran the charity that swindled kids with cancer. You took money that was meant for those kids with cancer and you put it in your own pocket. So yeah, I understand how your view of morality is a little bit warped here, but you are way, way off base if you think Ivanka Trump has done a single thing throughout her life to make the lives of women across this country even a little bit better.