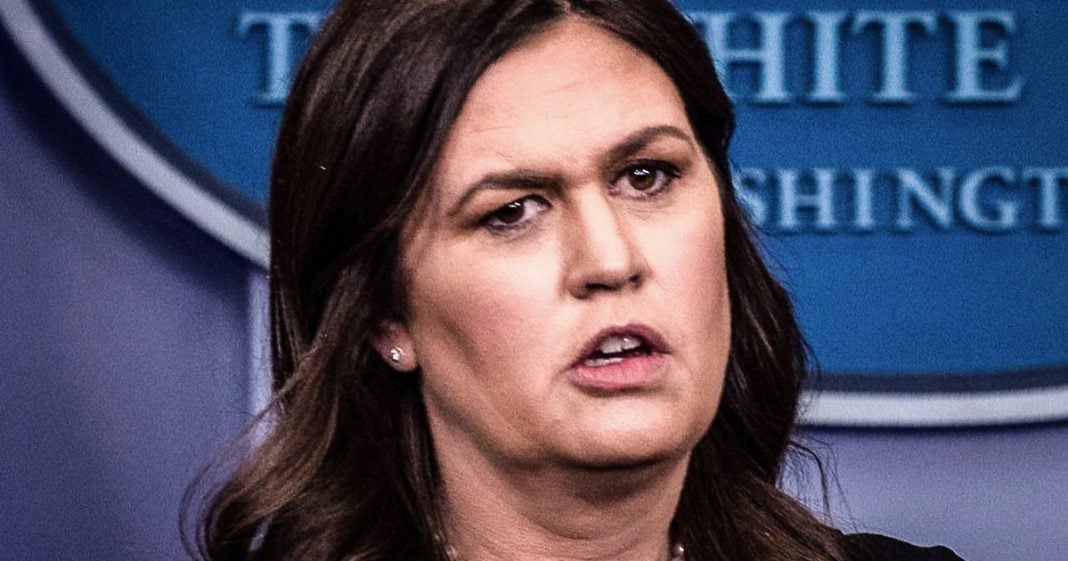 In a bizarre defense of Trump’s constant use of “executive time”, White House Press Secretary Sarah Huckabee Sanders said that this time allows the President to be “creative.” This is one of the weakest lies that we’ve ever heard from the Press Secretary, but it does fall in line with her willingness to support Trump no matter what happens. Ring of Fire’s Farron Cousins discusses this.

Recently, Axios reported that to Donald Trump had spent roughly 60 percent of the last three months in his so called executive time, which is Donald Trump’s time to sit there on twitter watching TV and calling Fox News host who are not yet on the air for that day. So as she always does, Sarah Huckabee Sanders comes out and decides to defend the president spending more than half his time not working by saying that this executive time actually allows the president to be more creative, right? It gets the creative juices flowing, sitting there watching Fox News and playing around on his phone. That’s what she said. That was her emailed response to the organization’s. After this story came out, let’s read a little from it says, uh, she said that Trump has a different leadership style than his predecessors. And the results speak for themselves to allow, uh, the executive time. It allows for a more creative environment that has helped make him the most productive president in modern history.

It’s indisputable that our country has never been stronger than it is today under the leadership of president Trump. And it’s all because according to Huckabee Sanders, he’s allowed to sit on his ass and watch TV all day. That is why America is great and I hope she understands what she saying. She’s basically saying that by sitting around and not doing anything, the president is helping the country. Maybe it’s because he’s not interfering. Maybe it’s because he’s not out there and acting is stupid policies. Maybe it’s because he’s too preoccupied with what’s happening on the Fox and friends couch that day. But here’s the thing. First and foremost, Donald Trump is not the most productive president in modern history. And only an absolute idiot would think that he is. I mean, honestly, yeah. The man has reshaped the judiciary for several generations here in the United States, as any other Republican would have done in that position.

Uh, the Republicans in the Senate and house, they, they’re the ones who gave us the massive tax cut for the one percent. All Donald Trump had to do was sign it. It’s not like he had to bring people over to the Republican side and say, come on, vote for this. We need your vote. No, they all wanted it and they did that themselves. Those are really the only two accomplishments that this man can speak of throughout his entire presidency, and he really didn’t play a role in any of them. Yeah, he nominated the people for the federal judiciary, but as reports have shown, that was after meetings with Mitch McConnell, after Mitch McConnell had meetings with members of right wing think tanks who told him who to nominate, who he then told Donald Trump who to nominate. This guy has done nothing in sitting around in his lazy boy all day.

Watching TV in tweeting is not helping this country. It’s also not helping him get his creative juices flowing. Is Sarah Huckabee Sanders implied what it’s doing is allowing the even more dangerous people within this administration, and yes, there are some people like John Bolton. It’s allowing them to call the shots. People like Kirstjen Nielsen, they’re the ones who need supervision, even if it is supervision from Donald Trump, because those two human beings are far more evil than Donald Trump could ever hope to be, but when he’s sitting there watching TV not working isolated from everyone else, those two and many others in the White House are left to their own devices. They can do whatever the hell they want and that is a problem. As bad as it is when Donald Trump is actually working and enacting horrid policies, it’s even worse when he’s not working and allowing his evil little underlings to do all of the policy that he should be doing.