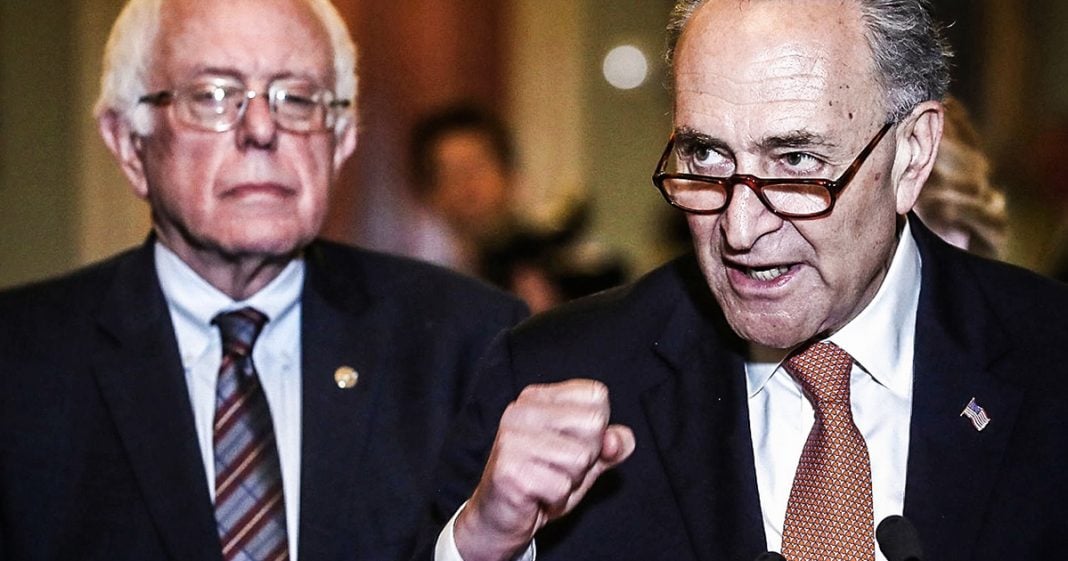 Senators Bernie Sanders and Chuck Schumer have teamed up to draft legislation that would put an end to corporate stock buybacks if corporations aren’t paying at least a $15 minimum wage. This is the kind of legislation that is sorely needed to help combat the rampant greed that has become the standard at American corporations. Ring of Fire’s Farron Cousins discusses this move.

In a very unlikely Senate teamup, a establishment Chuck Schumer has teamed up with Progressive Bernie Sanders to draft legislation that would effectively put an end to corporate stock buybacks if those corporations are not paying their employees at least a $15 minimum wage. Now, I am not surprised in the least that this is legislation that Bernie Sanders would help draft. I am, however, really surprised that Chuck Schumer would be involved in this because when you think about corporate accountability and progressive policies, the named Chuck Schumer is not the first thing that springs into your head, but gotta give credit where it’s due and give Schumer credit for signing onto this because honestly, this is the kind of legislation that we have needed in this country for a very long time. Here’s how bad the issue is. Right after the Republicans passed their tax cut package right at the end of 2017, incorporations in 2018 started getting those tax cuts.

They did not reinvest in their own companies. They did not go out there and make new factories. They did not expand their their businesses. They did not hire more people and they did not give people raises, at least not in the ways that Republicans promised us was going to happen. Instead, they spent $1,000,000,000,000 in 2018 buying back their own stock and the only thing that does is enrich the shareholders of those corporations. You know the already wealthy people calling the shots. They got even more money because they bought back their own stock. Therefore driving up the price, even higher employee has got nothing. Most of them did not get raises. Most of them did not get bonuses. You know, in fact, we’ve actually had a lot of the corporations who engaged in stock buybacks laid off thousands upon thousands of workers. So not only did some workers get nothing, other workers literally lost everything.

The companies made a lot more money and sanders and Schumer, and I’m sure we’re going to have a lot more democrats signing onto this. They’ve come together and say, we’re stopping this, and our legislation says, if you’re not paying your employees a living wage, if you don’t give them, raises your not allowed to buy back your own stocks. We’re putting limits on you and these are the kinds of regulations that are sorely needed in the United States because it doesn’t say that they can’t buy back their stocks. It just puts prerequisites on that company. You cannot enrich yourself if you have not taken care of your workers. You cannot put more money in your pocket if you haven’t put any more in your workers’ pockets. That’s how we create a strong working class here in the United States. That’s how companies use to show their appreciation for the hard work that their employees did.

They got rewarded. I know this was back in the day long before most us were born, but that’s actually how it happened. When the company did better, the workers did better in a lot of the reason that happened is because we had strong labor unions. Then Reagan came along, started the era of deregulation and union busting, and now we are where we are today. Concentrated Wealth, a squeezed middle and working class here in the United States who keep getting less, and yet those corporations keep squeezing them and every drop they can get out of them goes right back into the pockets of the wealthy elite. This bill would help curb that to an extent. I mean, after all, these are the companies who, again, they spend a trillion dollars on stock buybacks last year, spent 140 times more money buying back their own stock than they did on their employees. So yes, it’s time to put an into this and even if it takes a weird alliance between Bernie Sanders and Chuck Schumer, who’s pretty much always been a corporatist, if that’s what it takes to get it done, then so be it. Maybe Chuck Schumer’s trying to say, you know what? Maybe I’ve been wrong for the last few years of my career and maybe maybe I need to start doing something to help American workers. Whatever his motivation is, congrats to him. And as always, congrats to Bernie Sanders for being the true leader of this legislation.