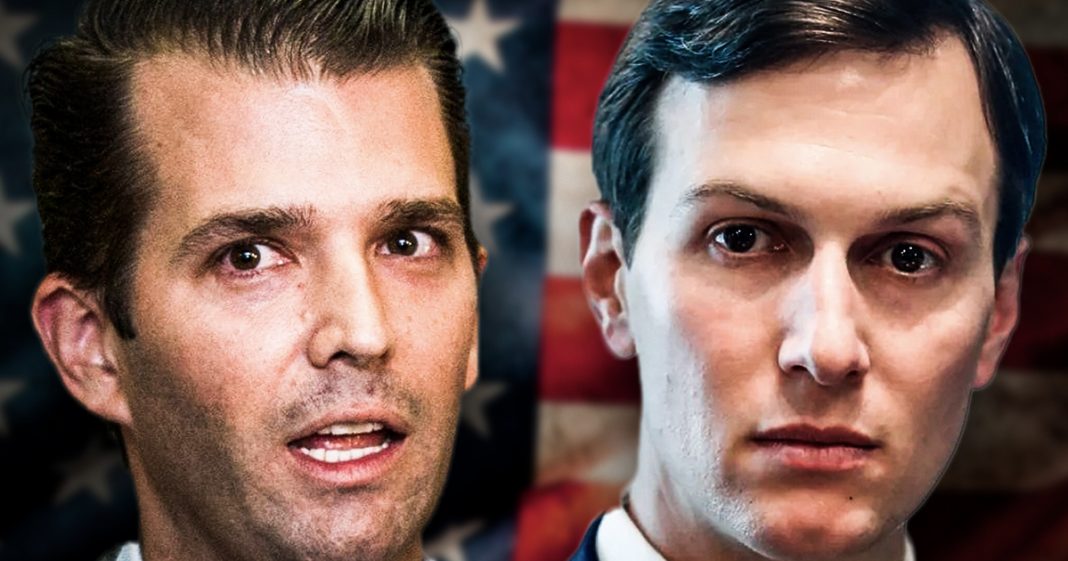 Democrats in the House are preparing to vote on whether or not to send the transcripts of explosive testimonies from Donald Trump, Jr. and Jared Kushner to special prosecutor Robert Mueller, a vote that is more procedural than anything since Democrats control the Chamber. This could put Kushner and little Trump in a lot of trouble and open up a whole new avenue for Mueller’s investigation. Ring of Fire’s Farron Cousins discusses this.

Tomorrow, Democrats on the House Intelligence Committee have scheduled a vote and what they’re going to be voting on is whether or not to send over some of the transcripts from the congressional testimonies that people like Donald Trump, Jr. and Jared Kushner gave to the intelligence community within the last two years. You see, here’s the thing, they want to send these transcripts over to Robert Mueller, the special prosecutor because, and this was a surprise to me, mother apparently doesn’t have those. Wouldn’t you think that the guy investigating all of these idiots would need those transcripts, need to know what these people told members of Congress behind closed doors when they were no cameras running. To be honest, I was quite shocked about this and then I remembered, well, Republicans did control the house for those two years, so I guess technically it’s not at all that surprising. Nonetheless, Democrats are gonna vote tomorrow whether or not to send this information over there.

And this is really just a procedural vote. I Democrats control the committee. They’ve got higher numbers. So yes, this is a thing that is going to happen and in fact it would have happened a long time ago and Republicans know that, but what Republicans did was they actually put off assigning members to that committee in order to basically cripple it for as long as possible. Clever move by Republicans, but ultimately it’s not going to do you any good. And again, Jared Kushner and Donald Trump Jr. are the two real targets that Democrats say they want to send these transcripts over and they claimed that these transcripts are explosive and that they could be of vital importance to a guy like Robert Muller. Specifically. What they’re trying to do is prove that both Trump, Jr. and Kushner lied under oath when they testified. So by sending these transcripts over to Robert Muller who also has information, he’s talked to a lot more people than that a committee did within the last couple years.

So he knows a lot more than they do and he’ll be able to square up those transcripts and those statements from Trump Jr. and Kushner and whoever else may be there with what he already has. And if it turns out that one of them lied, there go more criminal charges. And what’s really interesting about this is that after Roger Stone got indicted, everybody’s already assuming the next two dominoes to fall down or going to be Kushner and Trump Jr.. In fact, even before Roger Stone got indicted months ago, people were saying it’s probably going to be Roger Stone. Then the next one’s goIng to be Trump Jr. Kushner and that crew a crew, and then it’s going to be Trump himself. Well, democrats are trying to hasten that along and say, all right, well let’s get you these documents because these are things you can probably pop these guys for a couple of crimes with.

But as I mentioned, it may not be just Kushner and donna, a don Jr.. Here is a the entire list of people who Robert Mueller may find interesting stuff on their transcripts that they gave before congress. brad parscale, digital media director of the 2016 campaign for Trump. Keith Schiller, Trump’s former bodyguard, erik prince, the founder of black water, a hope hickS, former white house comms director, felix sader for former Trump real estate associate, steve bannon and alex next, who’s the former ceo of the political consulting firm, cambridge analytica. They might send over all the transcripts from all those people. They have a total of 73 different people whose transcripts they have that they could be sending over to Robert Miller, but I think at this point they’re just ready for the big fish to finally be hauled into the boat, so I don’t think they’re going to worry with people like alex nicks or hope hicks. They want Trump Jr., and they want Kushner and after this vote tomorrow, it’s likely that they’re going to send over everything. they have the robert muller and he’s going to be free to do with it whatever he feels necessary.