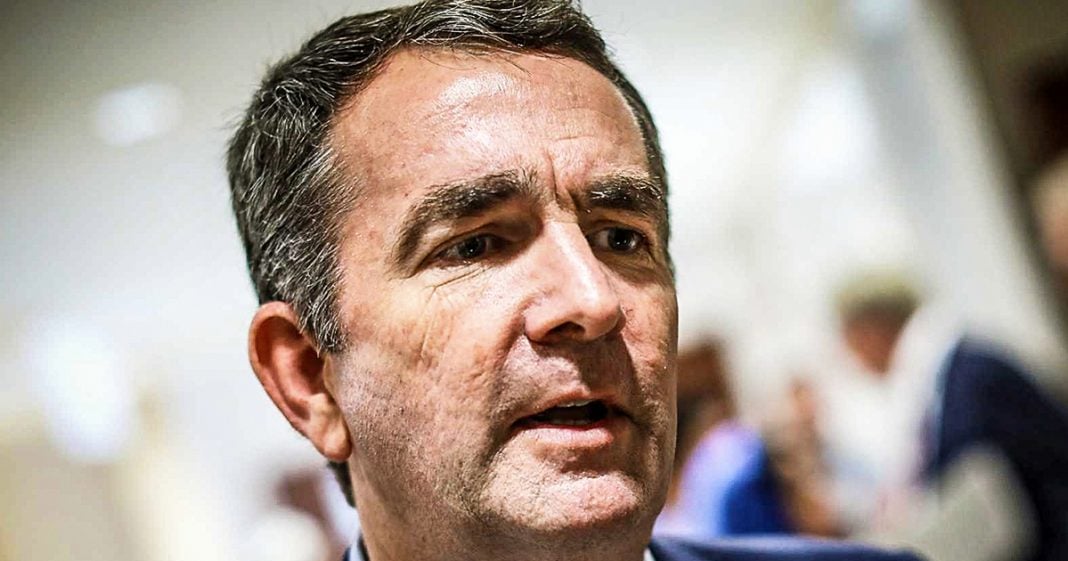 Virginia governor Ralph Northam is, so far, not stepping down after photos emerged showing that the Democratic governor engaged in racist behavior in the past. Calls for his resignation are growing louder, even among conservatives, which is odd considering their Party has stood by their racist members. Ring of Fire’s Farron Cousins explains the hypocrisy of Republicans and why plenty of their leaders need to be gone along with Northam.

Well, it’s only been a few days since Virginia governors, Ralph Northam, a medical school yearbook page was made public showing that the governor had put a picture on his personal yearbook page of a man in black face standing next to a man wearing KKK robes now at first north and came out and said, ah, you know, Oh God, that’s so awful. I should’ve never done this photo. And then Saturday he comes down to some not resigning. I wasn’t even in the photo. So we’ve got a bit of conflicting stories here. First he says, yeah, this is a photo I was in. Now he’s saying I was never in the photo, but honestly it’s almost worse if he wasn’t in the photo because at that point he was just picking out pictures that basically embodied him as a person to put in his yearbook thing and said, you know what really says, Ralph Northam to me, a man in blackface standing next to a man in KKK garb.

That is Ralph Northam. I mean, either way this guy needs to resign. And Thankfully, Democrats all over the country, even though it’s in Virginia, have told North, I’m repeatedly you gotta, go buddy. This is unacceptable. Whether or not you were in the picture doesn’t even matter at this point. You have to go. This is unacceptable. It’s inexcusable. You’re gone. Northam says, I’m not going anywhere. Republicans have come out had to Kevin McCarthy, House minority leader. Say Northam. You’ve got to go. Rhonda McDaniel, Romney, the woman in charge of the GOP itself says

This is also awful. Northam has to go and the right about that. But Republicans need to kind of check themselves a little bit, right? I mean, yeah, you censured Steve King, but you didn’t call for his resignation. You kicked him off committees, but he’s still a member of the House of Representatives. You gotta do better than that. You got to get rid of him. You have to also purge your party of the racists. You have been coddling for decades. Mitch McConnell, posing in front of a confederate flag with a big old smile on his face that’s just as bad and he should go to Lindsey Graham. All the horrible things he said over the years. He’s got to go. You can’t call for one racist to resign just because he’s a different party. And then ignore all of the ones in your own. Especially. I don’t know if Republicans have heard of this guy, but uh, it was Donald Trump is his name, president of United States. Horrible. A horrible person.

Let me read you this. This is from the Washington Post. It kind of just details a quick list of all the horrible, racist things that Donald Trump has done over the years, both before becoming president and after for years. He fueled birtherism to attack President Barack Obama. He wants argued that a federal judge couldn’t be impartial in a case involving Trump because as Trump said, he’s a Mexican. We’re building a wall between here and Mexico, early in his presidential candidacy, Trump called for a total and complete ban on Muslims entering the country in office. He ruminated on the United States needing more immigrants from places such as Norway and fewer immigrants from Shithole countries referencing Haiti, El Salvador in African countries. How are those statements, those issues pushed by the president of the United States, any different than Ralph Northam showing up in a yearbook from 1984 in black face or a KKK robe or just thinking that it’s a great picture he wants to remember for forever. It’s not. There is no difference. Racism is racism and it has no place in either party. The Democrats were right to call for north them to resign. Northam needs to resign, but Republicans, if they want to call for north to resign, they’ve got a lot of people on their own side that they need to be calling for as well.