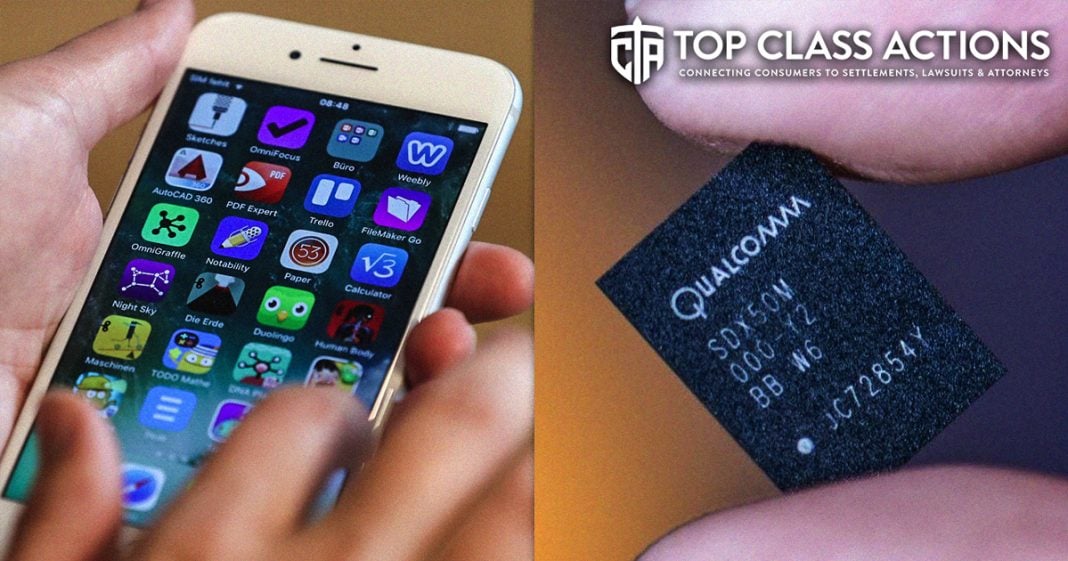 Consumers who purchased a cell phone since Feb. 11, 2011, may be affected by a Qualcomm antitrust class action lawsuit pending in federal court. A settlement has not been reached and no money is available at this time. However, this litigation is being dubbed “quite likely the biggest class action in history,” and may affect the rights of more than 250 million cell phone owners. Numerous Qualcomm class action lawsuits claimed that consumers paid higher prices than they should have for cell phones based on the inflated cost of modem chipsets. The lawsuits alleging Qualcomm engaged in anticompetitive behavior were consolidated into multidistrict litigation in April 2017. Ring of Fire’s Farron Cousins discusses this with Scott Hardy from Top Class Actions.

Farron Cousins:                  Regardless of the kind of cell phone that you may be carrying with you at any given point, there’s a very good chance that the chip inside helping to keep this thing operational, it was made by a company called Qualcomm. Well according to a new class action suit, Qualcomm may have inflated the price of their modem chip sets and therefore you may have paid too much for your cell phone.

Joining me now to help explain what this class action lawsuit is about is Scott Hardy from topclassactions.com. Scott, right now, we’ve got this, this massive lawsuit, a class action suit against Qualcomm. Tell us what the suit is alleging that this, you know, chip manufacturer had done.

We’ve already covered class actions regarding increased prices over DVD players because of the chips themselves that were, were raised in price because they made sure that those prices were higher. We’ve covered it for memory and computers and memory and actual cell phones. And so now we’re seeing this class action lawsuit against Qualcomm over the modem chip that is in almost every phone that’s been purchased since February 11th, 2011. And it’s that same, it’s that same allegation of collusion between Qualcomm and other chip manufacturers to keep the price of modem chips higher than they would, and to potentially artificially inflate that price affecting everyone who bought a cell phone since 2011.

Farron Cousins:                  So we’re talking about a span of a class here over roughly eight years. I mean we’re just a few days away at this point from the eight year mark of the potentially affected devices here. And according to the report which people can find on topclassactions.com, this could affect 250 million consumers. I mean $250 million that, that would make this probably, I think the, the largest class ever. And if it turns out that Qualcomm was in fact, you know, artificially inflating the prices and thereby making consumers pay more for their cell phones, this could potentially hypothetically result in a settlement, over $5 billion dollars based on the number of users affected. The average mockup in price that they had to pay. So this could be more than $5 billion dollars. Right now, nothing’s really happened in terms of any money being available. There’s no settlements. Is there even any talk of, of settlements at this point? Or where do we stand with this particular case?

And as you said, the damages could be in the billions of dollars depending on what actually comes through. So I’m, I’m willing to bet that settlement negotiations are currently in process, but I know that Qualcomm is as, as they should be, right? They want to make sure that they’re gonna defend every penny they’ve got is they are fighting the certification in court. We’re going to see this continue along over the course of the next number of months and quite possibly years as Qualcomm fights it and tries to decertify the class action and get that certification thrown out. But the initial, the initial look at these lawsuits since kind of shows that that might not, might not happen.

It might just be right now, Qualcomm trying to make sure that they don’t pay, as you know, $2, $3, $4, $5 billion dollars in damages, and try to get it down to a manageable number to settle it. Because we’ve already seen these alleged price fixing class actions settle among almost all of the major chip manufacturers from ram two motherboards and just individual transistors. I know there was talk of a price fixing on those as well. So we’ll see how this one goes. It’s got a long road. Anytime you’ve got a potential settlement with a billion dollar payout, there’s going to be a heck of a fight.

Farron Cousins:                  Well, and at least with this particular issue, you know, buying a new cell phone, that’s something that people do have records of. You know, you and I have talked about a lot of things, typically people buy at the grocery store. They don’t keep the receipts, so it’s more difficult for them to prove that they bought it and were affected by it. Cell phones, on the other hand, when you buy one of those, it typically shows up on your bill, it shows up in your account.

You can look through your history and see what devices you had and when you got them. This is very easy for consumers to have the necessary documentation, should this reach a settlement and they need to come in and, and you know, go to the website and apply for this or whatever it is. So, this one, should it go to settlement or should it even end in a verdict should be pretty easy for consumers to be able to show, yes, I bought it, I had this, I was affected by it. I do qualify, correct?

Scott Hardy:                          Yes, exactly. And that brings up a very good point as to what we’d want to advise everybody out there. Every American citizen who’s bought a cell phone since February 2011, make sure that your address is correct with your cell phone provider. If you have, if you’ve moved a lot, you know it’s going to be how you will most likely be notified of this settlement if it actually happens, and when it happens is that every cell, every cell carrier that you purchase a cell phone from since 2011, will be trying to reach out to you or actually the settlement administrator in this case will be contacting them saying where do those people live?

And there’ll be sending you a little postcard in the mail saying, hey, you’re impacted by the Qualcomm alleged price fixing class action settlement, even though there is no settlement yet. You know, go to this website to submit your claim now, and of course we’ll have a whole lot of coverage on it as the as this progresses, because every single one of our adult viewers will most likely qualify.

Farron Cousins:                  Absolutely. If you need more information on this particular issue, follow the link in the description of this video, it will take you to the page on topclassactions.com talking about this Qualcomm class action, and while you’re there, do make sure that you sign up for the Top Class Actions newsletter full of information that is absolutely vital to American consumers, Scott Hardy with topclassactions.com. Thank you very much for talking with us today.