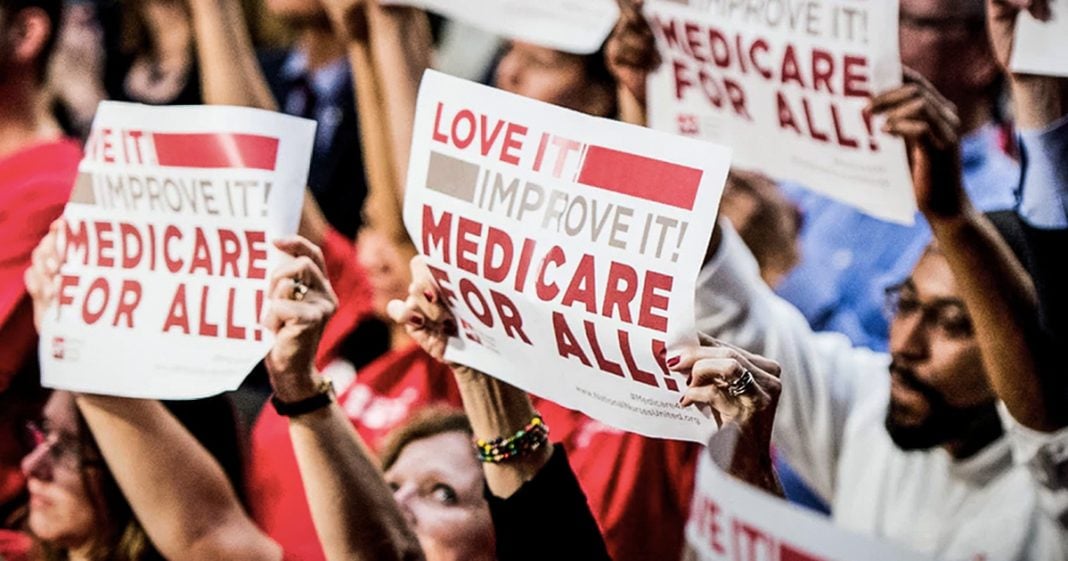 A healthcare industry front group that was created last year has emerged with a new ad attempting to warn people of the so-called dangers of Medicare For All. The ad is filled with lies, but that’s the only thing the industry has at this point. People hate private insurance companies and they want Medicare For All – polls are showing that every week. The healthcare industry is scared, but rather than changing their ways, they would rather attack better options, as Ring of Fire’s Farron Cousins explains.

As more and more Americans from every political party continue to call for Medicare for All here in the United States, the healthcare industry has kind of banded together and they’ve created a front group. They actually created it last year whose sole purpose is to fight back against Medicare for All. Now the group is called Partnership for America’s healthcare future and it’s made up of members from pharmaceutical companies, health insurance companies and hospitals. And this is courtesy of Libby Watson over it’s Splinter News, talking about this story. Well now this group Partnership for America’s healthcare future has put together a two and a half minute ad talking about how great our private sector health insurance is and how awful Medicare for All would be for every United States citizen. And as Libby Watson points out at Splinter News, the whole thing is filled with lies like this two and a half minute ad that they’ve a purchase this five figure ad buy for.

It’s nothing but lies saying, oh, you know, 180 million people already have healthcare through their employers and it’s affordable. Okay, but is it any good? I mean, I have health insurance through my employer that did nothing to stop the fact that my, uh, one of my asthma inhalers just quadrupled in price on January first I have insurance. I still can’t afford my medication. So what now? Right? Seriously, what now? And that’s the part, and I know this is coming from an industry front group, so of course they’re going to lie about it, but that’s the part that opponents of Medicare for All don’t seem to understand. Like, well, what about these people with private health insurance? What about us? Health insurance sucks. It’s covering less, we’re paying more, we’re getting screwed in every possible aspect of that. So why not switch to something better? The private sector failed, the private sector failed.

And when the private sector fails, it’s time for the government to step in and say, all right, hold up. We’ve been running this Medicare program for a long time. It may not be perfect, but it’s a hell of a lot better than what the private sector is offering. In fact, our members actually have lower wait times to get into hospitals to go see a specialist or a doctor. They’re overwhelmingly happy with the service we provide compared to people with private health insurance. So you know what, let us take a crack at this because we’ve been pretty damn good with this or at the very least a lot better than the private sector has been and that’s what the American public wants. The people out here calling for Medicare for All are not people who don’t have insurance. We are people who are tired of being screwed over by our insurance companies. You know, maybe your doctor refers you to a specialist because you broke your knee and now you’ve got to go to an orthopedic. Well, guess what? Maybe that orthopedics not covered. You didn’t know that and now you’re stuck with a $10,000 bill that’s out a network and there’s nothing you can do, but pay that or go into severe medical debt. You can’t go back and take back the results that doctor gave you. It’s already happened.

Private insurance is absolute garbage and unfortunately it’s garbage that we have to have because garbage is still better than the alternative of dying from a very preventable disease because you can’t even afford to go to the hospital. That’s where we’re at and that’s why we need Medicare for All. And the biggest issue here though is that these pharmaceutical companies, insurance companies, hospital corporations, they got billions upon billions upon billions of dollars at their disposal to fight back against the Medicare for All movement, billions of dollars to continue spreading their misinformation from coast to coast and border to border and they’re going to continue to do that. But the silver lining here is that they can’t deny the reality that people see everyday when they go to the doctor. Those bills that come in the mail, even though you have health insurance saying, oh yeah, well you had a cold, you went to the doctor, you still owe us $300.

I know you pay $300 a month in premiums and I know you had to spend $200 and that antibiotics prescription, but now you’ve got $200 bill from your doctor, you know, because we only cover partial up to this point. It wasn’t a well visit and there’s all kinds of technical jargon in there to confuse you and mislead you, but at the end of the day, you’re not only paying for your health insurance. You’re still paying for your doctor visits. You’re still paying astronomically out of pocket for your pharmaceuticals and you’re just getting screwed all the way over. But the health insurance companies, the drug companies, the hospital corporations, they are pocketing billions of dollars every single year by screwing us over. And we’re not going to forget that because of a couple of flashy ads put together by this disgusting Little Front group that doesn’t want us to have better healthcare.