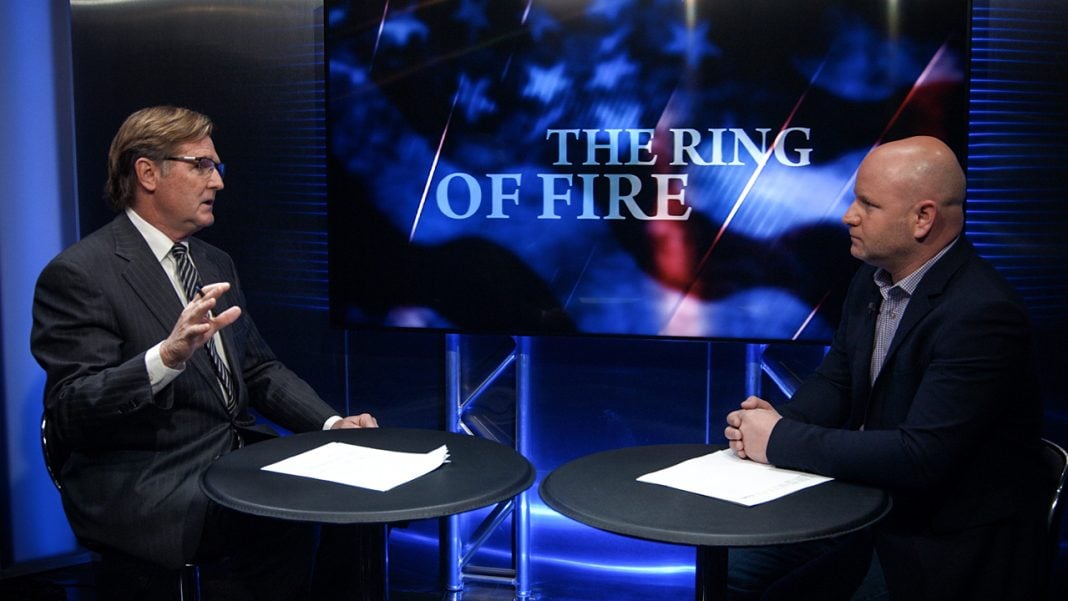 A new documentary film is out that tells the story of DuPont’s C8 – a chemical used in the manufacturing process of Teflon – and how that chemical has poisoned countless people around the globe. Ring of Fire’s own Mike Papantonio handled those cases and is prominently featured in the film. Ring of Fire’s Farron Cousins talks with Mike Papantonio about the case and the new film titled “The Devil We Know.”

Farron Cousins:                  A new documentary film is out that tells the story of DuPont’s C8, which was a chemical used in the manufacturing process of Teflon and how that chemical has poisoned countless people around the globe. Ring of Fire’s own, Mike Papantonio handled those cases and his role in those cases is featured prominently in this new film.

So Pap, The Devil We Know is the name of this documentary. It’s phenomenal. In case anybody hasn’t seen it yet, there is a link to the Netflix, it’s now streaming on Netflix, that is in this description of this video. But tell us exactly what, what this documentary tells. What’s, what’s the story?

Mike Papantonio:             I think that to me, Farron, if I’m to sum up what it is about the documentary that’s important, it is this. Corporate media has gotten to the point where they don’t tell stories anymore. Okay. Stories like this because advertisers won’t let them do it.

Okay. DuPont would not let corporate media tell these stories because they advertise. Bayer now owns, you know it’s, we see it with all these corporations. Okay. With all Dow Chemical, with this one is Dow Chemical and DuPont. So, so what’s happened is documentary makers, these young, brilliant people coming out of school now understand that the place to go is not corporate media. You go to a place and you tell a story like this.

These documentary makers have won more awards than I can count for other films. But, so, so this tells the story about how DuPont in the early sixties had every reason to know that their product was causing cancer. They used C8 to make Teflon. Okay. And I really am of the opinion still that we’re still looking at how much C8 comes out of Teflon over the, over years. We know that a new pan, you’ve got C8 that comes out in a substantial amount of, amount of exposure is going to flow from that.

Okay. So the company knew in 1960’s that this was happening. They, they covered it up. They, they dumped the excess C8, this toxin, hugely toxic C8 into the Ohio River. It contaminated the drinking water of 70,000 people all along the river. Caused birth defects, caused cancer, cause gastro intestinal issues that have killed people all up and down the Ohio River Valley. So now this, this story tells about the coverup.

They’d buy their way into these little town called Parkersburg and everybody was employed by them there in Parkersburg and it’s that old thing about, well, you know, we’re going to let them do it because this is how I make living, but it’s killing their children. Okay. It’s killing, causing birth defects. There’s actually one scene in the, well, there’s so many scenes in the, you just have to, it’s on Netflix.

To not look at this movie and pick up a, a Teflon frying pan and go cook eggs in the morning, you are a fool. You’re a damn fool. Watch the movie and now think about this. This story is having to be told by a documentary because the national news, when they, when they came out with any, any story about it, there was such huge pushback. They actually hired the people that worked as director of the EPA to push back.

They hired people high, as high as they could in the White House to push back. And it’s a classic story. What we’re seeing Monsanto do, Monsanto and Bayer do with Roundup. We see it with pharmaceutical cases all the time. We are victims and you know, people have no idea until 10 years later when they’re have this unusual cancer. They go, where’d this come from? That in this town it was so bad, children’s teeth were turning black and they couldn’t explain it why.

Animals had, you know, they had tumors all over their body and they didn’t know why. Cattle all along the river were dying and they didn’t know why until, until somebody started taking a look. Friend of mine who hired me to try the case with him, a guy named Rob Bilott, got involved and he said, look, this is unacceptable, man and he risked everything. Matter of fact, they’re making a movie about him.

The, the movie will come out probably either 2020 or 2021 about Rob Bilott, Rob Bilott’s effort in this. I was, I was brought in to try the case. That’s what my specialty is. He did the workup on it and we had another few firms involved with it and very, very capable firms. But the real, the real story here is this story would not even be told, but for social media. And for, but for this, this, this movie that’s now on Netflix. Just look at it. I mean, it’s all right there. You see the depositions that are being taken. You see the reaction in the depositions.

They’re like, you know, they’re like deer in headlights. And so this unfortunately is the norm. It’s the norm. It’s not, this is not the exception. In America today, corporate media sucks so bad. NBC, ABC, CBS, all of them, they are so dysfunctional that a story, this big was barely even told. Even after we, even after we hit them for five verdicts. They were hit five times in trial up in the Ohio River Valley up in Columbus, Ohio. The national media barely gave it a yawn and people are using this stuff every day.

Farron Cousins:                  Well, and what’s interesting, you know, just on that point is the fact that Netflix has kind of revitalize the public’s interest in documentaries. Now, The devil We Know is not necessarily a Netflix original documentary, but it is available there now. But Netflix has done so much in the world of documentaries just over the last few years. More and more people are watching them.

It’s not something where, well, you can only watch a documentary if you go to a film festival or if you happen to find it at a video store, which doesn’t even exist anymore. And they can do that because Netflix is dependent upon, you know, monthly subscriber money, not DuPont money, not Dow money. Netflix has been phenomenal with revitalizing documentaries.

Mike Papantonio:             I was, I was at Sundance when this movie showed, the place was jam packed. The way the, this movie is so well done by these award winning documentary folks. I mean, look, I’ve had, I’ve been involved in several documentaries that they’ve done on the cases that I’ve handled. This by far is the most intelligent storytelling I think I’ve ever seen in a complex case and I, I just urge everybody, go to Netflix, watch this movie, The Devil We Know. And you will have a firm understanding of how badly the American public has been victimized by corporate America.

Farron Cousins:                  Absolutely, and you can find a link to that in the description of this video. It will take you right to The Devil We Know, on Netflix.