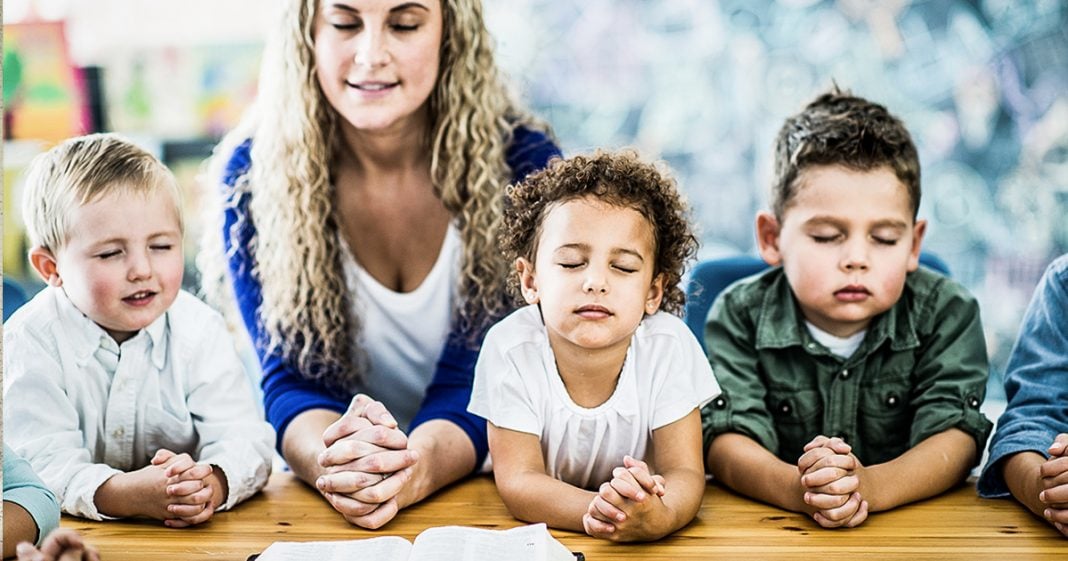 Donald Trump recently threw his support behind the idea of teaching the Bible in public schools, but as a recent article in The Atlantic pointed out, this could end up being very bad for Christians. After all, they like to ignore all of the things that the Bible says about caring for your neighbor, being kind to foreigners, and how wicked the wealthy are. They may not get the results the expect if they push this initiative, as Ring of Fire’s Farron Cousins explains.

On Monday, Fox and friends air to segment where they were talking about the need for teaching the Bible in public schools and how Republicans all over the country. We’re actually pushing bills and initiatives to force public schools to teach children the Bible. You know the thing. It’s like, it’s going to help with Literacy Bible literacy classes. And then Donald Trump, after watching this on Fox and friends, did what he always does. He tweets out like, hell yeah, I love this. I don’t remember exactly what he said, but he threw his support behind teaching the Bible in public schools. Now I have repeatedly said, and we’ve actually covered these initiatives by the Republicans in past segments. Uh, I am not in favor in any way of forcing public schools to teach the Bible. Not a fan of it whatsoever, unless of course you also want to throw in the Koran, the Torah, every other religious text and make it a class that includes all of them.

And you’re only teaching the historical significance of those particular texts that I would be okay with. As long as it’s also an elective. However, Republicans are trying to make this something that happens and according to a recent article in the Atlantic, this will end very badly for them, not because it’s unconstitutional, but because the more people learn about what’s actually in the Bible, the more they’re going to start to question what the hell is wrong with the Republican Party. Now the Atlantic didn’t actually go as far as to saying that part, but they should have and in fact they should have devoted more than two sentences to that entire theme. I mean, come on. You actually struck gold on this topic, on this issue with this theory and you literally devoted two sentences to it right at the end of the article, but here it is and I will spell it out and I hope the Atlantic does this.

Next time they choose to talk about it. If we took high school students or even middle school or elementary school students and we put the Bible in the classroom, we say, okay, kids, get out. Get out your bibles as time to learn about the Bible. We’re going to talk about the lessons in the Bible. What are they going to learn about? They’re gonna learn that we’re supposed to treat foreigners as if they were natives in our own country. We’re supposed to welcome them into our homes. We are supposed to feed them and clothe them and offer them hospitality. Nowhere they’re going to say, build the wall. Hashtag Maga. That’s not in the Bible. I’ve looked, actually, I’ve looked. I don’t see Hashtag Maga anywhere in there. They’re also gonna. Learn that blessed are the poor, not let’s give tax cuts to the wealthy. Also can’t find that passage in the Bible about giving tax cuts to the wealthy.

They don’t learn that. Do not commit adultery. It’s kind of odd considering that the dude in the White House makes it a basically his favorite pastime is adultery, or at least it was before he came to the Oval Office. God only knows what’s happening now. The point is, every actual lesson from the new testament goes against every single thing that the modern day Republican Party is about. They don’t care about adultery. They don’t care about the wealthy screwing over the poor. They don’t care about destruction of the environment, which, yes, protecting the environment and God’s creation is in the Bible. That is our duty according to that book. So what are these students going to think about the Republican Party when they learn that Jesus taught us to take care of one another, to help each other, to give medical care to people without asking them to pay for it. You know, that’s a big one too.

So yeah, I wish the Atlantic would have done a better job of expanding on that because that is exactly what would happen. A lot of these students would have their eyes opened. They might actually start to understand that today’s modern Republican Party has absolutely nothing in common with what is actually in the Bible, though they love to throw the Bible in our face whenever they get the opportunity to do so. I still don’t think it’s a good idea to force bibles into our public schools, but the silver lining here is that if Republicans managed to successfully do this, it’s still going to end very badly for them.