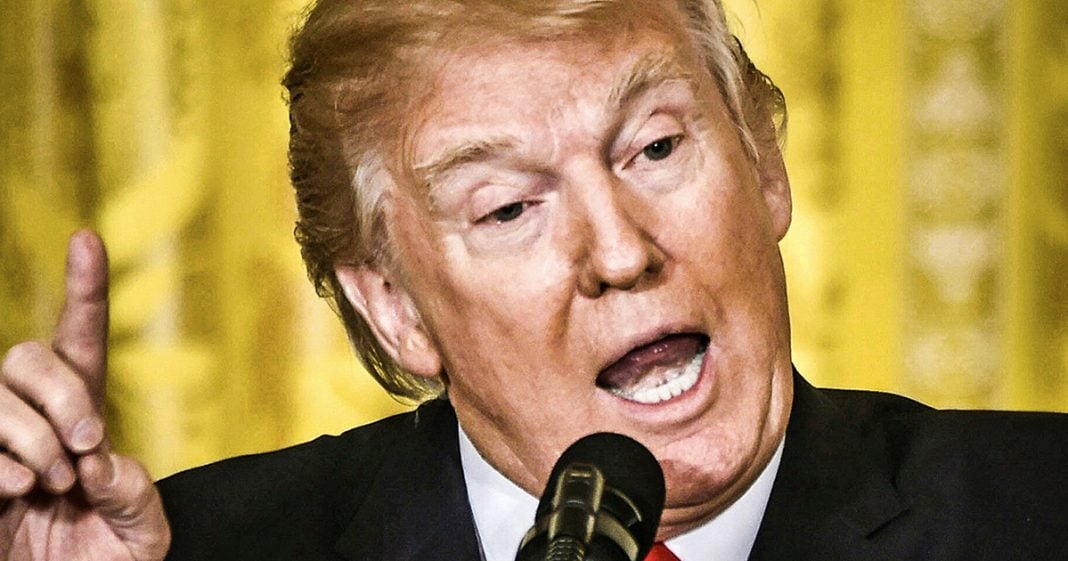 Rep. John Lewis, in his capacity as the new chairman of the House Ways and Means Committee, will be holding a hearing on February 7th that will look at the possibilities of getting Donald Trump’s tax returns and making that information public. The public has a right to know what this man is hiding in his finances, and if he had nothing to hide he wouldn’t have broken the norms of releasing this info during the campaign. Ring of Fire’s Farron Cousins explains the significance of this move.

On February Seventh, Democrats in the House of Representatives on the ways and means committee headed by Democratic Representative John Lewis. They’re going to have a meeting and what they’re going to talk about is donald Trump’s tax returns and of course Mike Pence is tax returns. They’re going to have this meeting to try to figure out how can we get access to these tax returns and then make this information available to the public. Now the Democrats on this committee, they’re trying to go about this, you know, by the law. They’re doing what they can. They’re doing what they are allowed to do. They’re handling it legislatively as they are supposed to because after all, Donald Trump is under numerous different investigations. He was one of the first president in the last 40 years, or actually the only president last 40 years I should say, to not give us any of his tax information.

And so it kind of seems likely that the man’s trying to hide something and if he wanted to shut everybody in this country up about his alleged business dealings that may have compromised him, release the tax returns. Show us that nothing happened and then you’re good to go. You might even put an end to some of these investigations into you, but you won’t do that because we know you have something to hide and the Democrats on this panel also know that and that’s why they want these tax returns. Now they’re going to try to go through the rules and see what they can do, see if they can get it from the White House, make it available to the public. They’re gonna. Get opposition and resistance from the Republican Party. They’ll get opposition from the White House, but there is a provision in a 19, 24 tax rule that says that the chairman of any of the three tax committees can access any taxpayers’ information.

Anybody’s tax return, any single person in this country, if you’re the chairperson of one of those three tax committees, they have access to it. They are legally allowed to get access to it so Trump could fight it all he wants and they don’t want to have to go through using this provision, but they will if they have to and they will if they need to, and that’s the key word here. This is information that we need to know. It could completely show us how corrupt Donald Trump is and I’m not talking about the Russia probe. I think to me, what’s more intriguing? His water, his deals with Saudi Arabia, what’s going on with UAE, what’s going on with Qatar? There is so much shady dealings happening with those Middle Eastern countries and the Trump family and we need answers into that. We need to know where money is going or coming or whatever and that information could be contained in those tax returns.

Or as I said, these tax returns may show that this is a guy who’s on the level. He just sometimes acts like an but in reality never committed a single crime whatsoever. Everybody calmed down. He’s just stupid. He’s not criminal. That could be something we find out. We don’t know what’s in those returns because he’s been too cowardly to release them to the public. That’s not good. Democrats also have a a provision and a new bill they want to get past that would force presidential and vice presidential candidates to a release tax information to the public when running for president or vice president. That is something I think is desperately needed. If you want to be president of the United States, you got to come clean. You got to show us what you got. You got to put all your cards on the table so that we can make decisions and we can make sure that you’re not doing things that you’re not supposed to with your money. I don’t care about how much money you have or don’t have. What I care about is where it’s coming from and what it got you and I think that’s what a lot of people in this country care about. You know, I don’t care if he is a billionaire or not a billionaire. Whoa. Well, what matters is, was he taking money from other countries that could eventually influenced his policy, is president of the United States, and that is something that all of us desperately deserve an answer to.