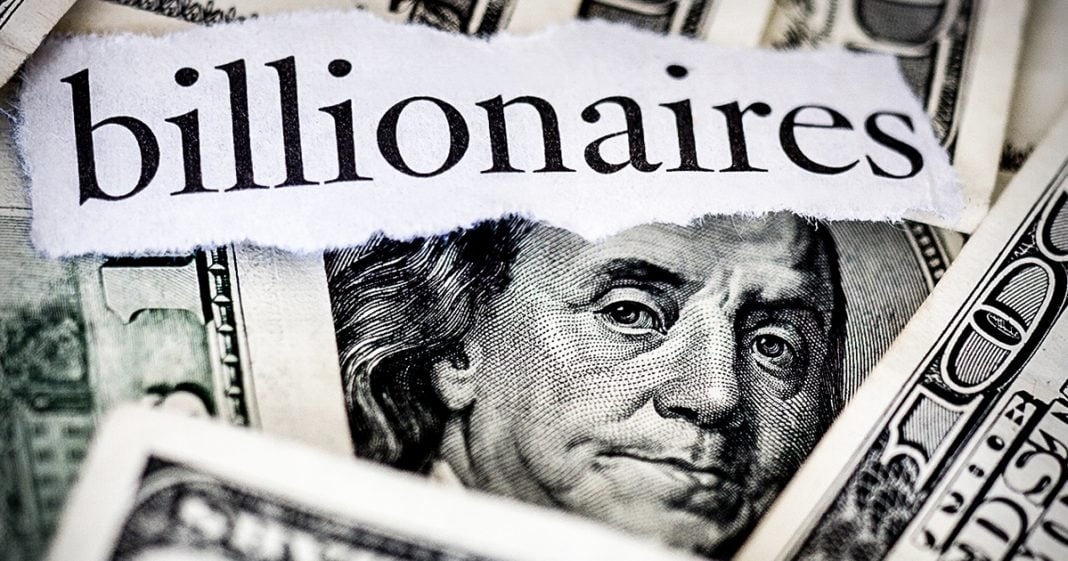 The billionaire class is currently scared of both the Republicans and Democrats, but for different reasons. So instead of putting their weight right now behind a party, they are trying to get their own members involved in the electoral process in order to push horrible centrist policies. Ring of Fire’s Farron Cousins explains their motivations, fears, and how they are actually doing significant damage to themselves with their efforts.

They don’t know what they’re doing. The government shutdown costs us billions upon billions of dollars and they’re so volatile that they’re causing the stock market to kind of go crazy, massive ups followed by massive downs. People lose a lot of money in those, especially the wealthy elite, so they can’t trust the Republicans. They’re terrified of the Democrats tax plan. So what do you do in that situation? Well, you find a billionaire centrist and hope that they can connect with the American public enough to get into the White House and then preserve what you’ve created and here is what the billionaire class in the United States has created. They have created a government that continues to deregulate the very businesses that are polluting and destroying not just the environment, but our own bodies. We have toxic chemicals in the drinking water of more than one third of American citizens and not just, you know, oh, these are toxic and it can make you say, these are cancer causing chemicals.

These are cancer causing chemicals. That bio acount accumulate, which means they just build up in your system until you’re just constantly poisoning yourself. Even when you’re not drinking that water. That’s what’s happening in the United States today, today, one third of us drinking that water every day and best part is we don’t even know which one is the one third. We don’t know who we are. We don’t know if it’s us, if it’s them or who it is, one third of us just drinking it away without any knowledge of how deadly it is. That’s the deregulatory deregulation that these millionaires and billionaires one in place because they profit off that they don’t have to handle their toxic waste in a, you know, expensive way by properly disposing of it. They just dump it in the water system and say to hell with it. They’ve created a system to where it’s nearly impossible to become a self millionaire or billionaire anymore.

They’re shipping our jobs overseas. They’re starving us of tax revenue. That could go towards public schooling or could go to any of the grand projects on the horizon. Medicare for all debt free college, things like that. Expansion of social security, but instead they want to keep that money in their pocket. So that’s why they’re pushing these centrus, which is exactly what Howard Schultz is. It’s not because they’re, you know, think that he’s going to have the best path for Americans. In fact, it’s quite the opposite. It’s because Howard Schultz in the billionaire class, they don’t have a path because they don’t want a path. They want to stay where we are, how we are, and make sure that nothing changes. Their taxes stay low, regulation stave and lower and their profits stay higher than ever. You put a centrist in there who’s not going to tweet out something stupid that will tank the stock market and they don’t have to worry about that anymore.

You put a centrist in office who’s not going to regulate Wall Street and you don’t have to worry about that. You put a centrist in there who’s not going to hold corporations accountable or criminally prosecute them when they break the law or when they knowingly kill or maim American citizens. Then you don’t have to worry about that anymore. That is what the billionaire class is doing and they’re doing it because they hate Democrats because Democrats want to tack some more and they hate Republicans because Republicans can’t be trusted and are too volatile to keep things steady. So here comes the billionaire centrus class ready to rescue us from our horrible future of possibly having a better country. That is the last thing that the billionaires want us to have because if we start doing better, it might mean that they have to lose a few million dollars out of their billion dollar fortune and God forbid they make that sacrifice of a little bit of money that they’d never even noticed was gone. Just to help millions of Americans live a little bit better.