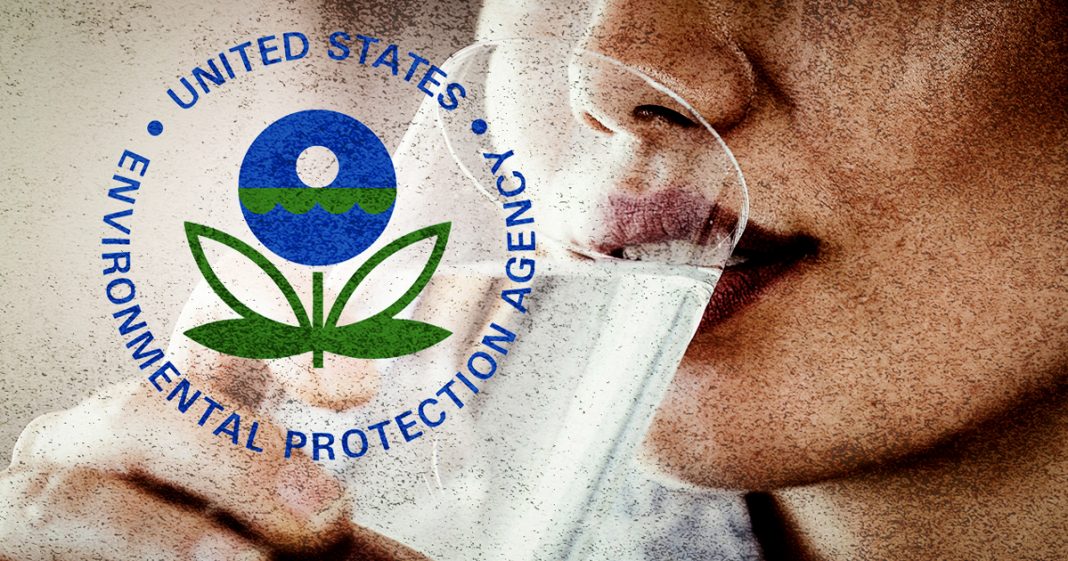 The EPA under Donald Trump has announced that they will NOT be regulating certain toxic chemicals that have been found in drinking water all over the country. According to the EPA’s own data, these toxic chemicals can cause cancer, birth defects, liver disease, and a host of other problems, but even that isn’t enough to get them to actually do their jobs. Ring of Fire’s Farron Cousins discusses this.

Ever since Donald Trump took office, the environmental protection agency has completely stopped working to protect the American public from the toxins that are put out every single day from corporate America. And this week they have decided to take it one step further. They have decided the EPA under Donald Trump that they will not be regulating certain cancer causing chemicals that are currently found in the drinking water of more than 110 million American citizens. One third of us every day are drinking corporate America’s cancer, causing chemicals known as PFOA’s and PFOS. We’re drinking that everyday. One third of us

and the EPA came out and said, you know what, we’re not going to regulate these PFOA’s and PFOS under the Clean Drinking Water Act. So corporations, power plants, whoever you are, chemical giants, you don’t have to worry any more about how much of these chemicals you are putting into our water. And these chemicals are used in damn near everything. You know, uh, the foam that the military uses to fight fires. It’s in there the chemical process for making teflon from dupont. Those chemicals are in there. And they will kill you in large enough doses over time. It’s estimated that these two chemicals, Pfo, pfls, 98 percent of people in this country have them in their body right now. They are bio-persistent. They build up over time and they kill you in. Our EPA just told us we’re not going to limit the amount of these chemicals that can go into your drinking water. And what’s fun about this is that just last month, I believe it was December 18th or 17th, our own EPA said the following exposure to PFOA and PFOS over certain levels may result in adverse health effects including developmental effects to fetuses during pregnancy or to breastfed infants. Eg Low birthweight accelerated puberty, skeletal variations, cancer, Eg, testicular, kidney, liver effects, eg tissue damage, immune effects, egg antibody production and immunity, thyroid effects and other effects, eg cholesterol changes. That was word for word

what the EPA on the EPA dot Gov website has to say about the dangers of these chemicals that this week they tell us we’re not going to regulate them. So if you’re pregnant and you drink in these chemicals because you went to the faucet and got a glass of water, you can look forward to things like low birthweight accelerated for your child, you know, bone variations. But don’t worry if you’re not pregnant, you can still look forward to things like testicular cancer or kidney cancer or liver disease. Why not? Right? Let’s just go ahead. Hey, we’ll throw in the cholesterol abnormalities as well, just to give you the Trifecta of horrible things that will happen to your body because of these chemicals coming out of corporate America every day that now can flow unabated into our drinking water.