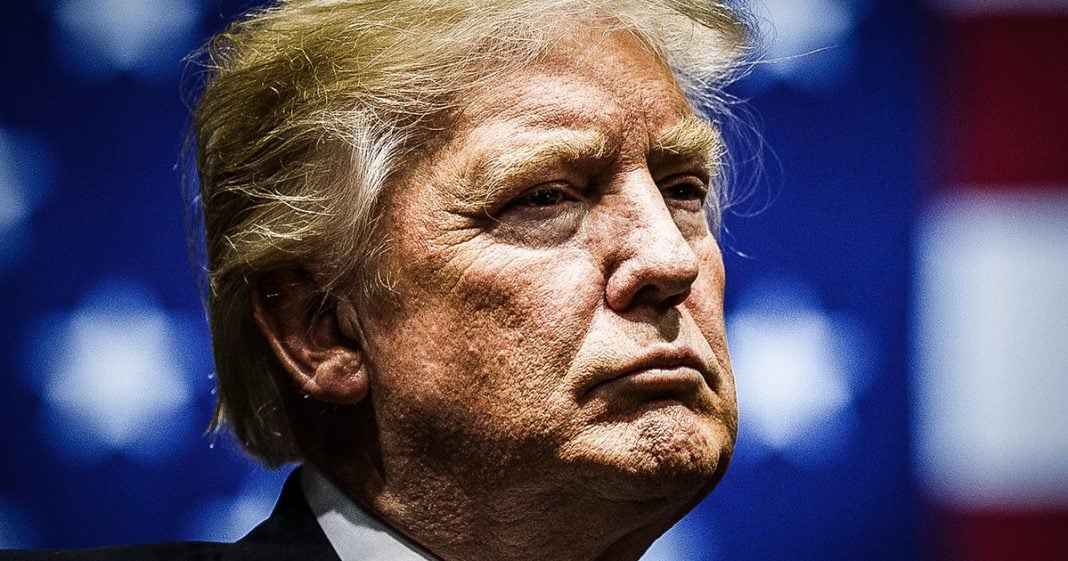 The Republican National Committee has made it official – they are putting their complete faith, trust, and support on Donald Trump in the 2020 Presidential election. The Party voted on it last week, and Trump issued a special “thank you” to them on Twitter. The Party knows that they have to prevent challengers to Trump in the primary, but it isn’t because they love Trump so much. Ring of Fire’s Farron Cousins explains what’s really behind this move.

So last week, the RNC, the Republican National Committee, passed a resolution within their party saying that they will unequivocally and unwaveringly give their 100 percent support to Donald Trump in the 20, 20 presidential election. Now that may seem like, okay, yeah, of course he’s the president, they’re going to support him, but when you consider the fact that we have heard murmurs for quite some time, now have possible Republican challengers popping up in the primary. This does become a very odd move for the Republican Party’s structure itself. To Go ahead and pass a resolution saying we will. We’re all for Donald Trump. We’re not changing course. He’s our guy. We love him all praise to the Donald. After this vote happened last Friday, Donald Trump tweeted, there it is. Thanks to them say, ah, you guys, a bunch of great guys. Thank you for supporting me even though you really don’t have a choice in what you want to do at this point.

We’re also starting to see, and this is something that we’ve talked about before, we’ve got some states all over the country right now, deep red states. I’m talking South Carolina as Kansas, places like that, they’re actually trying to abolish primaries and caucuses for the 20, 20 election, which would effectively prevent any third party Republican, not third party candidate, but third party Republican challenger, Primary Challenger from coming into the race because nobody in that state could even vote on you if they’ve already abolished the primary in their state. There’s a reason the Republicans are doing this and it’s not because they love Donald Trump. It’s because they fear Donald Trump. They do not want to not throw all of their weight behind him and then have him launch into one of his twitter tirades against the Republican Party itself. Why? Because that’s going to show the public heading into 20 slash 20 that the Republican Party is not unified, that they’re just fighting each other, that the establishment is fighting the president and nobody gets along and nobody knows what the hell they’re doing.

The other flip side of that is that they don’t want a primary challenger to enter the race. An air all of donald Trump’s dirty laundry for the last few years. Now everybody knows it all. It’s just that they don’t want it all coming back from the republican side because what happens if that person loses the primary, then you’re still left with Trump. He’s damaged again from all the nonsense of the last three and a half years, and that’s not going to bode well for him in a general election. So it’s just as much about protecting Donald Trump as it is protecting themselves from Donald Trump. But here’s the reality, Republicans, if you’re watching this, they’re trying to take away your choice, are trying to tell you Republican voters that you’re not even going to have an option heading into 20 slash 20 Trump as your guy. And if you don’t like it, then I guess you’re not a real republican.

That’s going to be the message we’re going to start seeing coming out over the next 18 months. Either support him or you’re not a real Republican. You’re probably one of those democratic Socialists Communists who would feel more happy and Venezuela, which by the way, we’re probably going to start bombing any day now. Um, so yeah, you got to support Trump, especially if we are in a war with Venezuela, we can’t change course. We had to stay the course. Stay with a leader. This is all bad for Trump. This is all bad for the Republican Party and nothing that they do at this point is going to improve their failing image with the American public. And the longer that the orange see continues to hitch its wagon to Donald Trump, the further down the toilet, Trump is going to continue to drag that party.