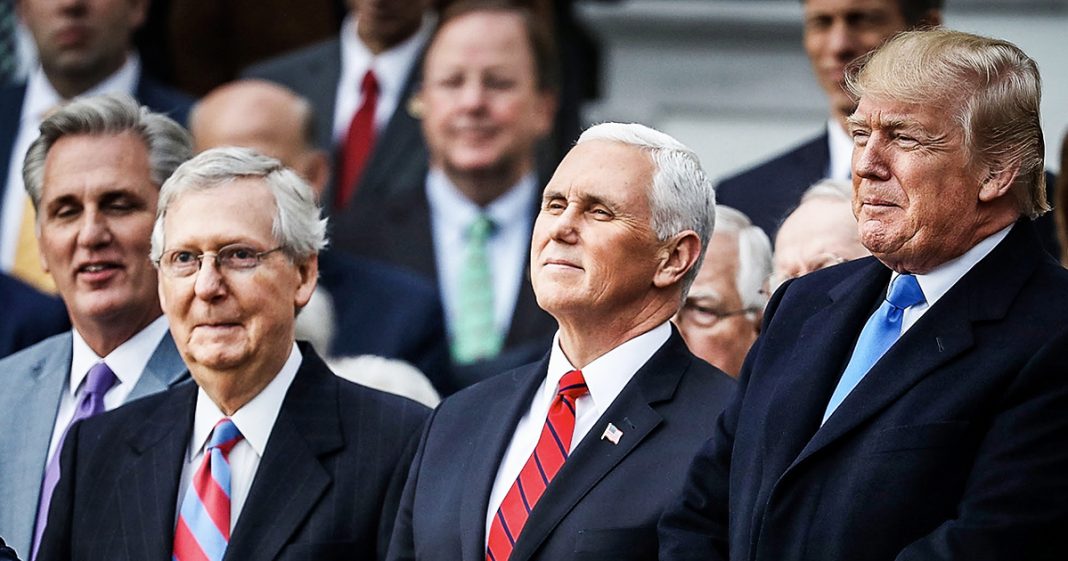 What does the Republican Party stand for? Is it tax cuts for the wealthy? Building a wall? Those are roughly the only two items that the Republicans have had on their agenda for the past year (other than their repeated failed attempts to repeal Obamacare.) But aside from that, they have absolutely nothing, and the public is beginning to realize that these people don’t know how to govern. Ring of Fire’s Farron Cousins discusses this.

The Republican Party has a very real problem right now and it’s a problem that extends far beyond the fact that they’ve got the giant man-Cheeto sitting in the White House. The problem with the Republican Party today is it they have no agenda. They have no plans, they have no policies. They are a party that has completely run out of ideas and the American public is catching on. When we look at the Democratic Party right now, what do they stand for and what do they want or they want a green new deal. They want Medicare for all. They want to wish and Free College.

They want to expand social security. They want a $15 minimum wage. They want to make sure everybody in this country is taken care of. They actually do have a list of things that they would like to accomplish. What are Republicans have seriously? What are the goals of the current Republican Party? I mean they still control the Senate and we know they’re packing the courts, but beyond that, what’s the goal? Deregulation and tax cuts. That’s been their song since the 19 eighties and here we are 40 years later and they’re still singing the same tune deregulation and tax cuts. Okay, well what are we going to do in this congress? Deregulation and tax cuts. Okay, we you got anything new? I mean we, we’ve heard that before. We’ve done it. Things aren’t working so well. Maybe maybe a new deregulation and tax cuts. That is today’s Republican Party. It’s all they know how to do all they know how to do is tell the government to stop doing things, deregulation and then, hey, give wealthy people more money and the American public is getting pissed off. Majority of people in this country actually want corporations to be held responsible when they poison us with their environmental pollution. They do. Majority of people in this country want the wealthy elite to pay more in taxes.

Majority of people in this country want medicare for all they want plants. That’s the bottom line. They want a party that has an agenda that has goals and knows how to reach those goals, and right now that party eight, the Republicans, and to be honest, it hasn’t been for quite some time,

but again, the Republican Party doesn’t know who they are. They don’t know where they’re going, they don’t know how to get there, and I think a lot of them do realize that they’re never going to go anywhere with their current leaders in place. Not just Trump. Mitch McConnell, what’s his plan? What does he want to do? Ted Cruz, Marco Rubio, Matt Gaetz. What’s the plan guys? What’s your agenda? What’s your policy? And I swear to God, if you tell me deregulation and tax cuts, I am going to scream because I have heard that tone for my entire life. You have no plans. You have no ideas. You have no agenda other than harming the American public in aiding corporations and the wealthy people are tired of it. I’m tired of talking about it. I am tired of living through it and so is everyone else in this country, but this is what I want people to remember as we head into this election season, which apparently has already begun at this point. The Republican Party has no ideas. The only thing they have our failed policies from the 19 eighties that have repeatedly proven that they will only benefit the wealthy elite. Please everyone remember that when you head into the polling booth in November, in 2020.