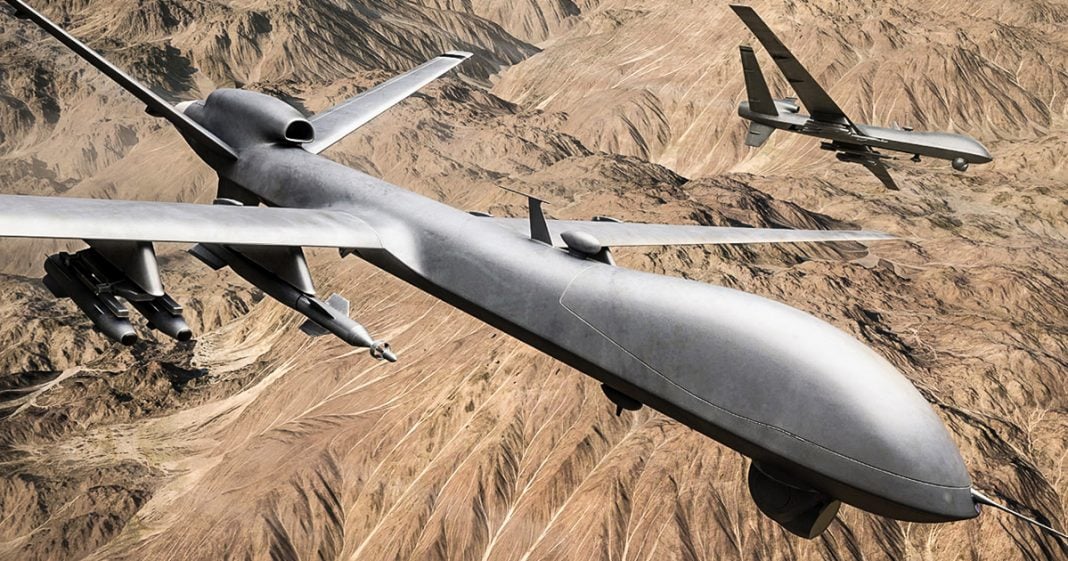 According to new reports, the Pentagon carried out more domestic drone missions on US soil in the last 12 months than it had in the 7-year period prior. This is an alarming trend, and to make matters worse, the Pentagon has made it easier for state governors to authorize the use of drones within their state without having to get federal approval. Ring of Fire’s Farron Cousins explains what this means and what could happen if this practice continues unabated.

The Pentagon has published new data detailing their domestic drone usage here in the United States, specifically drone usage for the year 28, and what they’ve released shows us that on 11 different occasions, 11, they use their military drones for operations here in the United States 11 times in one year. Now you may not think that’s a lot, right? I mean we have 11,000 drones that we use here and abroad and we only had to use them 11 times on our own soil in 12 months. That’s not bad, right? Well, it actually is. When you consider that in the entire eight year period prior to 2018, we only use drones on domestic soil a grand total of 11 times over eight years, but now under trump’s direction at the Pentagon, we’ve used them 11 times in the last 12 months. Some of this is innocuous enough. Okay. Some of it. One operation was for monitoring and detailing wildfires in California. Another one was from monitoring wildfires in Oregon. One of them was a for Colorado. Two of them were for hurricane damage surveillance, so there’s five.

That means there’s six, six military drone operations here in the United States that we’re not just for gathering surveillance on, on damaging things that could harm American citizens. Now, some of those six and some of these actually went on for months at a time over five months, uh, was surveillance of the border. Yeah, tracking down those illegal immigrants, those alleged caravans just running those military drones up and down. They’re looking for people that we could go and arrest the remaining missions will. We still don’t have a clear picture of what those were yet. But let me tell you something. This is terrifying. I, this is literally big brother on an airplane. Big Brother flying over us watching what we’re doing

and it gets even worse because last year a former defense secretary, Jim Mattis actually issued a new memo, changed the rules saying that I, the secretary of defense for the United States no longer has to be the person to authorize drone missions. Prior to this memo. If there was a drone mission, whether it was on us soil or abroad, secretary of defense had to be the one to issue. It matters, changed it, and he said, you know what, any high ranking military official can do it. You know what? Let’s go a step further to. Governors of states can now use our military drones at their own discretion. You got a problem with riots? Send in the military drone. Oh, you think there’s some civil unrest somewhere? Send in the military drone. These things are armed to the teeth. They’ve got all kinds of surveillance equipment. You can just monitor people. Twenty four slash seven, giving them the illusion of security when in reality we have completely sacrificed our own freedoms and that’s what this is about. This is a massive civil liberties abuse. It’s taking place at the hands of the trump administration and they want to do it more frequently and based on what the Pentagon said they did in 2018, it’s become obvious that they are doing it more frequently, which means 2019 this year, I’m willing to bet we beat that number of 11 domestic missions probably before Halloween of this year.