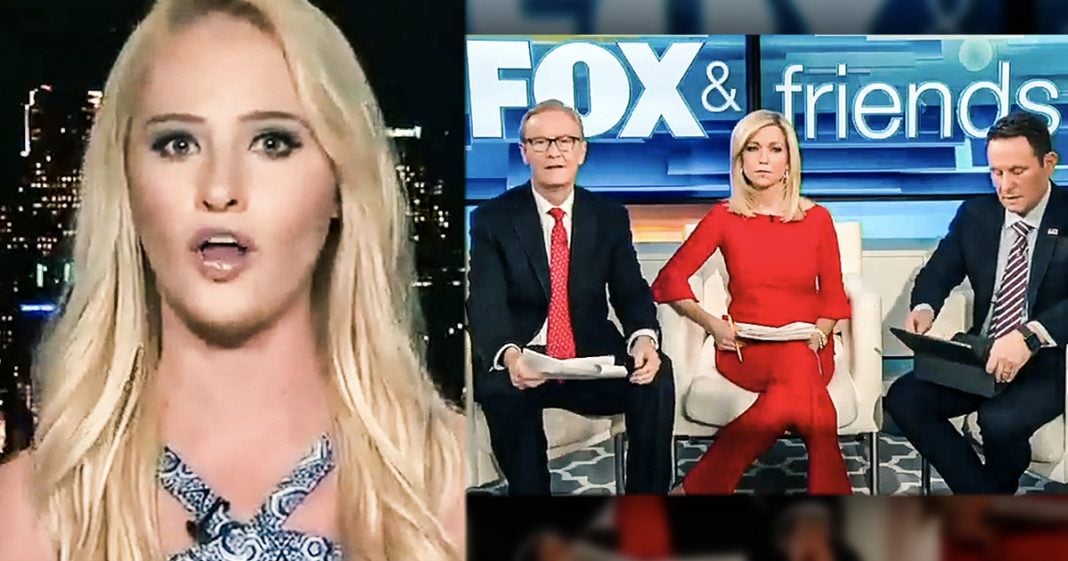 Fox News contributor Tomi Lahren went off the deep end this week when she told the Fox & Friends hosts that Representative Alexandria Ocasio-Cortez might be good at Twitter, but she’s not actually successful “in real life.” Not only does this not make any sense, but it shows just how braindead both Tomi and the rest of the hosts on that Fox couch truly are. Ring of Fire’s Farron Cousins discusses this.

but don’t you think the Democrats are trying to find their way, trying to find their footing? And then Alexandria Ocasio-Cortez is very successful. She’s the darling of the Democratic Party and she is so far left and has these socialist ideas. And then the Democrats are saying, oh, that works for her. Maybe that’s, that’s our ticket. Bingo. I mean, if you look at some of the things, medicare for all, look at all of the candidates that are supporting that single payer healthcare, those, those individuals right there, those five, uh, the green new deal, there are six candidates that are supporting that debt free public college. There are five Democrats that are supporting that. The left keeps going further and further left. Well, again, there’s a difference between being successful on twitter and social media like Alexandria Ocasio-Cortez, and being relatable on social media platforms and actually being successful in real life. But listen, the American people, we don’t want a handout, we want the government’s hand off, we want the ability to achieve the American dream in a safe and secure nation. And this crop of Democrats offer none of those things. I don’t think they’re a threat to Donald Trump and less he fails to build the wall. And then again, like I’ve worn before, we’re in for a real treat in 20 slash 20. If this is the crop of Democrats we have to deal with.

Okay. So that’s right. Yeah. Yeah. I mean, this woman, only a unseated a 10 term democratic congressperson in the primary then won the general election. But that’s not real. It’s not successful in the real world, right? She’s only successful on social media. I’m going to read something here is from David Dodge from the new civil rights movement where he goes through just a short list of what Ocasio-Cortez, uh, has accomplished in the real world. Uh, she plays second the International Science and Engineering Fair in the microbiology category with her project on the effect of antioxidants on roundworms during highschool. And that’s according to the Society for Science and the public. And in recognition of that, MIT’s Lincoln Laboratory named a small asteroid after her in high school before she ever had political ambitions. Uh, she’s interned for us. Senator Ted Kennedy graduated Coombe Latte from Boston University, worked as a waitress to help support her mother and Oh yes, primary and unseated a 10 term sitting democratic us congressmen then won the general election.

She now claims title to being the youngest woman ever to serve in Congress. But Tomi Lahren says she hasn’t accomplished anything in the real world, only on social media. Now I can forgive Tommy because I think she may have thought they asked her about her credentials and why she was on TV. Because Tomi Lahren is the person who has an accomplished a damn thing in the real world. Yeah. She lights it up on twitter by tweeting out crazy, insane things. I, everything that pops into a stupid little brain, she sends it out there. She can get tens of thousands of retweets and likes on it. That’s the only place this woman has ever been successful. I mean, she got fired from the blaze and even those folks had insinuated that she was walking around coked up all the time. They, they, they said that we don’t know if that actually happened, but that’s their impression of Tomi Lahren who worked with them.

So Tommy, you better be damn careful about what you do because you are attacking one of the most popular and at her age, one of the most accomplished members of Congress. And for you to sit there and say that, oh, she’s accomplished nothing, and Oh, this crop of Democrats, 20 slash 20 is going to be a piece of cake. I suggest you maybe take some time off of twitter and go look at some public policy polling because they show that literally every single thing a casio Cortez and the Democratic candidates are proposing fall in line with what the majority of public actually wants to happen. And that includes a majority of Republicans. They like Ocozzio Cortez more than they like you. So maybe you’re the one that needs to look at your list of accomplishments and start to realize, oh crap, I’ve never done anything worthwhile in my life.