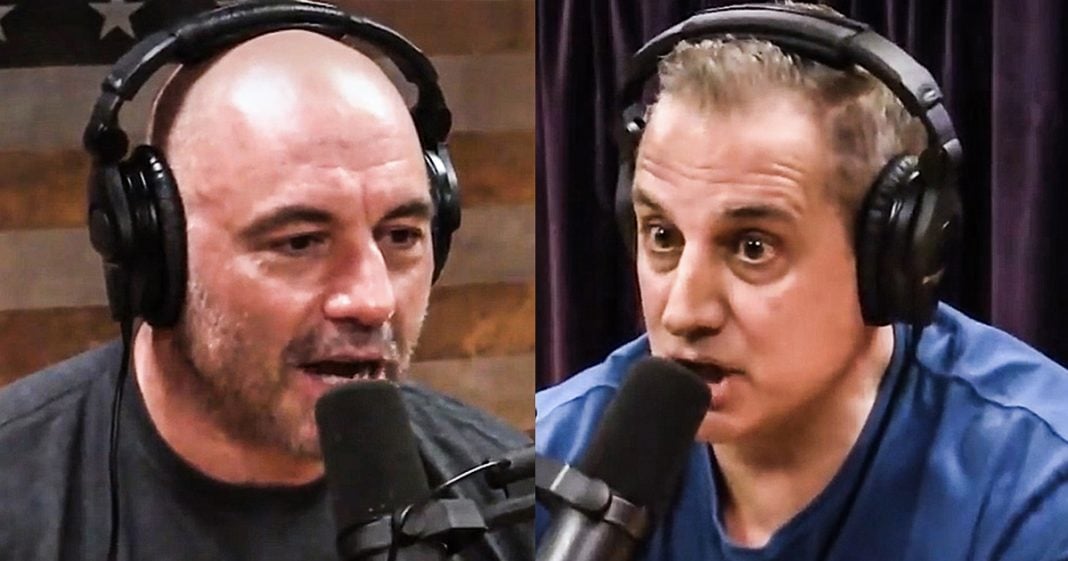 On a recent episode of The Joe Rogan Experience, comedian and Trump supporter Nick Di Paolo attempted to convince Rogan that the Mueller investigation was a complete farce and that Trump hasn’t done anything wrong. Rogan was further stunned when Di Paolo said that he can’t think of anything Trump has lied about when it comes to alleged criminal activity. There’s a long list, and Ring of Fire’s Farron Cousins explains what Di Paolo is missing, and also wonders why his talking points sound identical to every other conservative Trump defender.

Recently on an episode of the Joe Rogan experience, comedian Nick Depaolo came out and kind of did his, you know, conservative Defensive Donald Trump, guy’s done nothing wrong. He doesn’t ever lie and the things that Depaolo was saying seemed to stun Joe Rogan to the point where he really just couldn’t even believe that his friend was saying all of these crazy things. Take a look at the clip and pollutant is occasional Christ.

Yeah, I mean that’s this idea that Trump’s working with them as fucking silly. Well, I don’t know about that. I don’t think he’s working with them to undermine democracy, but it definitely think they’ve got some business dealings. I mean, they were offering him to Trump. That’s not illegal to penthouse in Trump. That’s not illegal. None of that is illegal. Don’t take that for me. Take that from Alan Dershowitz. Don’t smarter than both of us. I’m not saying it’s illegal, but I don’t think that he was honest about that. He said, I don’t do any dealings with Russia. I don’t have any business with Russia. He definitely did.

This is not true. Well, we’ll see. We’ll see. That’s what the targeting. They’re not going to go for anything you don’t think so

you think he’s going to just. Well maybe impeachment, but I’d even on on what k? I don’t even know what they get. High crimes and misdemeanors. I don’t. I don’t know what he’s done to talk about. Building a tower in Moscow is not illegal to have business in what he did he lie about specifically. Well, there’s a lot like what we can pull it up. Let’s, let’s find out all the things that we get to go to salon.com or you can go to a million different websites. Trump average 15 minutes a day. Two thousand 18. Almost triple the rate from a year of k, but hold on a second. What’s the myths? Truths. It’s a European paper, but isn’t that a little odd? 15 a day? Because I don’t know. It’s making that claim. I don’t know the exact 15 inaccuracies. You doubt that it’s true. You think it’s all lie. They just made up the fact that he lies a lot.

Allies. About what? First of all, what’s the definition of ally? So you think they just made up all these lies? Not all of them, I’m sure, but you could, you could go back with Hillary and fucking count. You could go to a go to Fox News and then put all that, pull up an but how many times Hillary was inaccurate. Do you know what? Uh, what about Islam is a, what about his? Yeah. When someone talks about something and instead of refuting and with facts, they go, yeah. Well, what about Hillary? What about bill built into, to. What about this? What about what about Islam? That’s what I committed. It was because you were saying that Hillary lied, but you’re making my point. You going to the Washington Post that’s just jamie pulled up the independent. You know what I’m saying? We’re just talking about Trump. You were saying that Trump doesn’t lie and they’re saying the lies. First of all. First of all, you know, I, I like to know the definition of a lie. If he misstate something,

do you think he does?

I’m sure sometimes when you talking to them, okay, so if he lives 1000 or 100 times a blatantly. Yeah. That’s fucked up. The Washington Post. It’s horseshit. Yeah.

Now the first thing I want to point out the fact that depaul, those talking points here are the exact same as every other Republican talking points about Donald Trump first. Oh, well that’s not illegal. You know, talking about this Trump tower deal. That’s not illegal. No. Nobody that’s been arrested has been arrested for collusion. There’s no collusion. It’s not happening. Uh, first of all, where, where’d you get those facts? Oh, wash to. Yeah, that’s crap. Those don’t count. Are you at Salon Dot Com? Whether they’re crap, that doesn’t count either. They do. Okay. Facts are facts. Doesn’t matter where they get reported. If it’s a fact, it’s a fact, but it, it really just kind of blows my mind a little bit because seriously, it’s like every Trump defender gets an email every morning telling them what their talking points of the day will be because you could compare it to pollo to Tomi Lahren to the people at Fox News to Rush Limbaugh and any other MAGA hat wearing person in this country and they will say the exact same thing.

It’s not a crime. Media is bad. It’s not a crime. Media is bad. He doesn’t lie. No. Trump lies about everything. And to be honest, I’m a little bit disappointed that Joe Rogan didn’t just immediately call him out and say, okay, you want the things that Trump has lied about that might be criminal. How about the fact that he said he had no business dealings in Russia, and in fact, we’ve now learned that those business dealings continued well after the presidential campaign. Michael Cohen also lied about that. Uh, how about the fact that his charity in New York has had to dissolve because they were committing fraud? He said they never did anything wrong. That’s a lie. How about the fact that he said he never had the affair with stormy Daniels? Well, he did, and then the fact that will. We never paid her off. Well, you did.

Well, that was just personal money. Well, it’s not. The list is endless of things that Trump has lied about that could potentially be crimes, so to sit there and say like, oh, well, who’s making these claims? What’s the definition of a lie? A lie is saying something. It’s not the truth. I mean, come on, nick, you can do better than that. What’s the definition of a lie? That might be one of the most pathetic things I’ve ever heard. If you don’t know what a lie is, then you’re not qualified enough to go on anybody’s program and really talk about anything at all on this planet. Trump lies constantly. We know this. It’s been documented. The fact checkers, in fact, checkers have seen it. We also know that there was a lot of criminal activity going on within the Trump administration, the Trump campaign, the Trump foundation, the Trump organization. Every guy this person has ever interacted with seems to be under investigation. Either that or they’ve already been indicted or they’ve already been sentenced to Prison Cohen, Manafort Flynn, Gates Papadopoulos. Now Roger Stone. Yeah. The guy who hangs out with a lot of criminals, for somebody who has allegedly done absolutely nothing wrong.