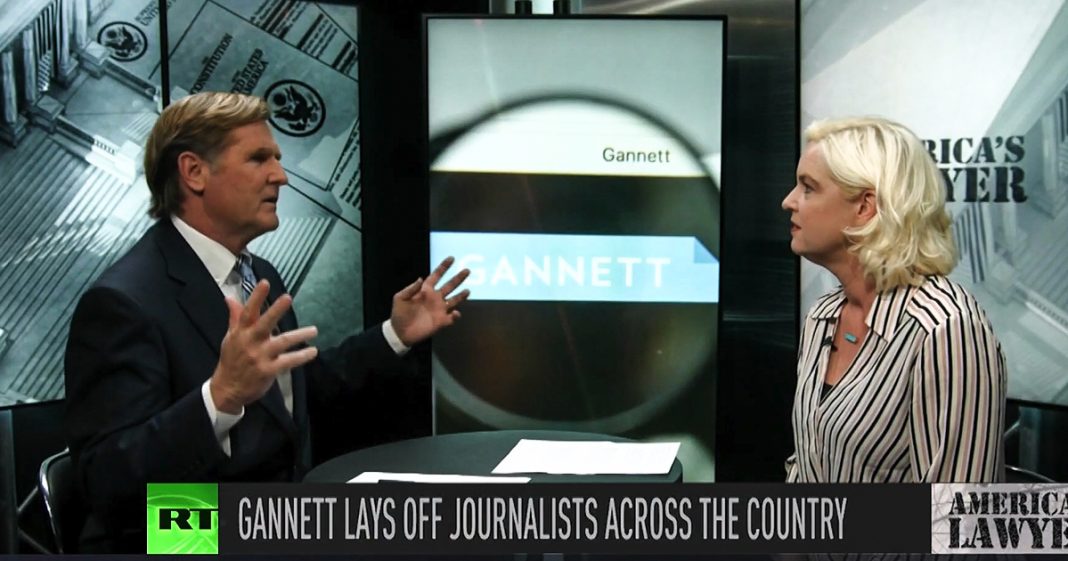 Via America’s Lawyer: Legal Journalist Mollye Barrows joins Mike Papantonio to talk about the recent cost-cutting move by Gannett to slash jobs all across the country.

Mike Papantonio:             Another brutal day for journalism as Gannett started slashing jobs all across the country in a cost cutting move and the cuts have not been minor cuts. This was followed by major cuts at both Buzzfeed and Huffington Post. Joining me to talk about this is Mollye Barrows, Mollye long history in journalism. When you see this happening…

Mollye Barrows:                No, I mean a thousand jobs just last week alone. You’re talking about journalists, other folks in the media and these positions are not going to be filled again, especially in the world of digital journalism and that giant sucking sound that you hear, that is Facebook and Google taking up all that online ad revenue because they do targeted advertising. So media outlets that are maybe even seeing an increase in audiences, they’re not able to attract the advertisers like Google and Facebook which dominate the digital world. The web is their home. That’s their turf and these online media outlets just simply can’t compete Pap.

Mike Papantonio:             Is it a credibility issue too? I wonder you, you gotta wonder is how, has the, has the public been charmed in this idea that journalism has failed us? That, that we, we don’t, we don’t see real journalism anymore. What is your take on that?

Mollye Barrows:                I think you’re right. To, to a great extent when you see these slashes, there have been some critics that say, well, this is the result of bad journalism or this is the result of journalists who aren’t doing their jobs and people don’t trust them anymore. And that’s sort of the social approach to it. The service part of journalism, if you will, but it has nothing to do with that, and has everything to do with their business model. Now does trust play a role?

Mike Papantonio:             Yeah, so part of it also is found in a generational shift. You know, I’ve seen this coming with HuffPost for quite some time. HuffPost used to be a lot more responsible. Now I call it kinda celeb nosh, you know, is what, you know, what’s happening in the celebrity world. There have one, they have one voice when it comes to politics about Trump, you know. Rather than, rather than talking about a Trump story, why are they talking about environment?

Mollye Barrows:                That’s exactly right. So that’s the other danger, I think in this. If you have Google, you also have Yahoo News, they’re actually laying off some people as well. You have Facebook. If they’re going to be absorbing a lot of this content that’s already out there, then trust becomes basically subjective. You know, people are like, well, it’s going to be free for me to get it on Facebook, even if they’re borrowing from outlets that I may or may not, it’s free as opposed to going and paying for a subscription service to a New York Times or New Yorker or whoever that you might have to pay for your news.

So you mentioned trust earlier, trust goes out the window when people start charging for journalism, they don’t care, it becomes a nonissue. But when it comes to basically Facebook owning this news, then that is the big issue when it comes to trust to me because we can’t trust them. They’ve been proven to be liars over and over again and they’re going to gear content to what people want to see instead of challenging them.

Mike Papantonio:             So we saw a story last week, Farron and I covered, either the last week or the week before, where you have Zuckerberg coming in, telling news organizations like small newspapers that we want to help you. We’re here, we’re here, we’re going to spend $300 million dollars to help you be a better journalism vehicle, right?

Mollye Barrows:                I think corporate owned media in general is what’s killing this country, whether it’s TV, online or newspaper. Newspaper’s dead. Online is certainly struggling when it comes to online media outlets. TV, not seeing the same number of reporters laid off because their advertising revenue isn’t being challenged like it is in the digital platform. But corporate owned media in general, they all want to own your content because you are a barcode to all of them.