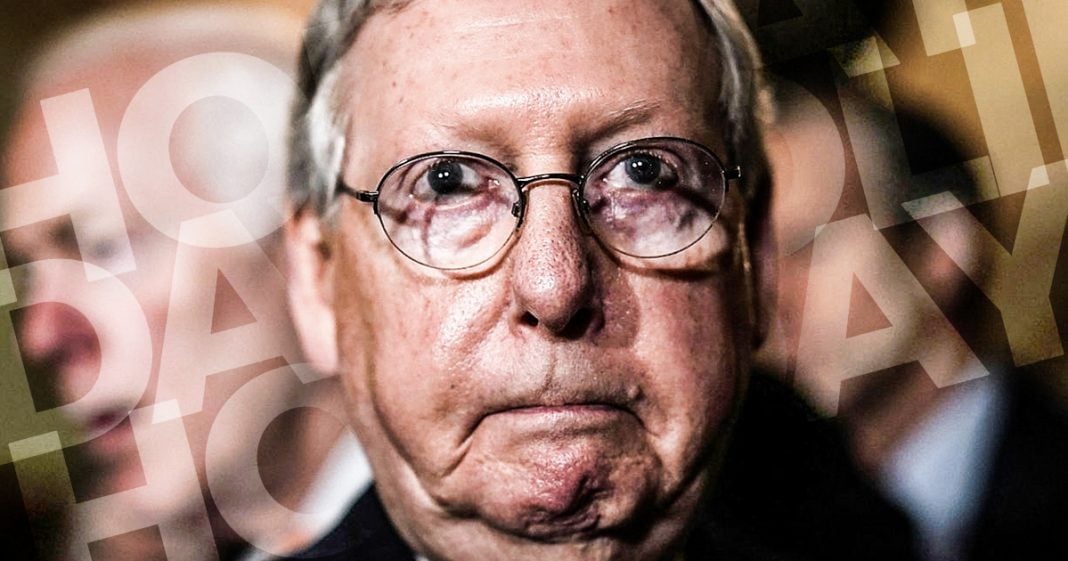 Senate Majority Leader Mitch McConnell proved how much he hates our Democratic process, and his Democratic colleagues, in a speech on the Senate floor this week when he accused Democrats of a “political power grab” by trying to make election day a national holiday. Nothing scares Republicans more than the thought of people actually being allowed to vote, as Ring of Fire’s Farron Cousins explains.

During a speech on the Senate floor on Wednesday, Mitch Mcconnell proved that he absolutely hates our democratic processes here in the United States. Now, what Mitch Mcconnell was officially talking about during this little tirade on the Senate floor was a a anticorruption bill that house Democrats had put forward different chamber, not even something that applied to Mitch McConnell yet, so anyway, they put forward this bill that actually includes making election day a national federal holiday, right. Give people the day off from work that way more and more people can get to the polls. Mitch Mcconnell lost it at that he could not stand the thought of people being allowed to go and vote. For some reason, Mitch Mcconnell is terrified of that idea and he actually referred to this as a political power grab by the Democrats, letting more people vote, giving people a better opportunity to go and vote. According to Mitch Mcconnell is a democratic political power grab, and that’s not even the worst thing he said about it. Here is a little snippet from Mitch Mcconnell’s little speech here. It shows he really doesn’t understand what he’s talking about. This as the Democrat plan to restore democracy, a brand new week of paid vacation for every federal employee who would like to hover around while you cast your ballot, just what America needs and other paid holiday and a bunch of government workers being paid to go out and work for. I assume our colleagues on the other side on their campaigns.

What the hell are you talking about, Mitch? What does that have to do with anything related to giving people the day off so that they can go vote. You’re trying to turn this into some kind of partisan thing when in reality it’s something that is sorely needed and yes, it would help to restore some kind of semblance of democracy or a democratic process. At least that’s not wholly corrupt. That is the plan and it’s a damn good one too, but you can sit there and you can say that, oh, the Democrats, they want these people to go work on their campaigns. Yeah, because having somebody work on your campaign for one day, that also happens to be election day. Yeah. That’s going to be super beneficial. You Moron. That’s not at all what this is about, but I understand. Oh yeah, people get a paid day off.

We’re paying for people to be at work even when they’re not at work. Yeah. Kind of like the Senate and the house. You guys get more time off than you know, public school children and yet make more money than most Americans could ever hope to make in a single year and their entire life. And you’ve got the audacity to be pissed off that you’re staffers, you know, cleaning crews. All those people would have a day off work while still getting paid. That bothers you, Mr. I get the entire month of August off for no reason whatsoever. Yeah, you can go to hell. Mitch. People deserve an extra day of vacation, especially if it means that they get to participate in our democratic processes, but I’ll tell you what, if you are a little too scared about people having a paid day off and all those salaries that have to be paid, even though they’re not working, then how about this?

Let’s make instead of election day, let’s have election weekend and spread it across two days on a Saturday and a Sunday. So people have two opportunities, you know, two days. If they can’t make it Saturday, they can go Sunday. Sunday’s not going to work for them. They’ll just go on Saturday. That way we can get as many people as possible. Nobody has to take time off work. It works with damn near every schedule you could think of in this country. There’s nothing wrong with it. The only thing wrong with it is that more people would vote in anytime more people make it to the polls. Anytime more votes are cast, it always ends badly for Republicans and that is 100 percent would mitch McConnell’s little temper tantrum on the Senate floor is all about. He understands that if more people get to the polls, his job and the job of most of his colleagues in Washington DC could come to a very abrupt and timely end.