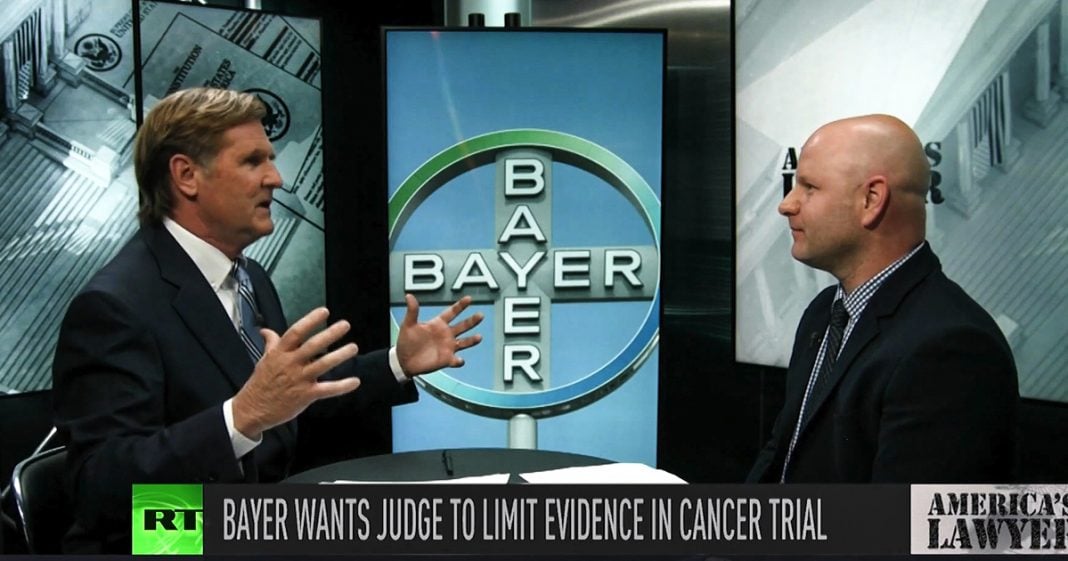 Via America’s Lawyer: The Bayer Corporation is trying to limit the types of evidence that can be used against them in court as their recent purchase of Monsanto has put them on the hook for Roundup trials and verdicts. Mike Papantonio and Farron Cousins discuss more.

Mike Papantonio:             The Bayer Corporation is trying to limit the types of evidence that can be used against them in court as their recent purchase of Monsanto has put them on the hook for Roundup trials and verdicts. Here with Farron Cousins. Farron, this couldn’t happen to a better company could it? To put Bayer on the hook for all the misconduct of Monsanto. It’s not, not like Bayer doesn’t have problems themselves.

Look, you know, I got to tell you what bothers me about this, this case and then what’s happening in California is you have this judge. You, the first thing you have to look at in how a case is doing is first of all, look at the judge. Now, this is a judge, you’ve done some background on him. You know, you’d think, okay, he’s in a, he’s a, he’s an Obama appointment. He certainly has to be there for the little guy.

He’s not. You know, he’s a corporate, he comes through the corporate structure of Covington & Burling and these rulings that he’s making affects thousands of cases to where we can, these people can actually get, they can get some justice against Monsanto and Bayer. What is your take on this?

Farron Cousins:                  Well, you know, this judge, Vince Chhabria, completely predictable. Like you said, Covington & Burling, worked for corporations as their lawyer representing them. So what he’s done here is a couple of weeks ago he said, okay, Bayer, Monsanto, whatever you want to call yourselves in court, you don’t want the plaintiffs to be able to bring in evidence showing that you tried to mislead the public.

What you want me to do is basically break the trial into two separate phases. Phase one did you cause the cancer? Phase two, did you cover it up? See Bayer and Monsanto only wanted to do phase one. So Chhabria finally did come out this past Monday and said, all right, I’m going to allow some of the evidence of your cover up in public deception, which it means nothing.

Mike Papantonio:             It means absolutely… Look, I have, full disclosure, I’m handling Roundup cases in, in St Louis. I chose not to go to California to be in front of this judge because I was afraid of these very kinds of rulings. You see a federal judge can give you little bits and pieces to make it sound like they’re being overly fair to one side or the other, but the truth is, first of all, a bifurcated trial, let me, you have to understand, you’re first trying the issue of is this person have a disease relating to this product, right? You’re you’re trying that first, and then you’re going back and looking at, well, how bad was the company’s conduct?

Mike Papantonio:             Are there documents there that shed light on the probability that this person has this illness? Look, I’ve taken depositions in this case, the documents are over whelming. The company absolutely has known for decades that their product, that Roundup causes cancer. No question about it. The World Health Organization comes out and says, yes, it causes cancer, and then the company Monsanto and now Bayer go about trying to pay off scientists to get them to write literature that’s contrary to that to that issue. So isn’t that probative in of itself?

The very fact that the company is going out trying to hire what we call biostitutes, these are these scientists that will say anything for the right amount of money. From an evidentiary standpoint, it’s probative on its face that whatever the mental process is of Monsanto, they have to go out and hire people to say something contrary that nobody else will say and then pay them big money. That’s probative of the, of the existence of the, of their knowledge, that yes, this cancer, this person has probably is related to our product.

Farron Cousins:                  Right, and part of the problem here too is that this judge Chhabria has 680 Monsanto cases in front of him. The, the panel there, the mdl panel said your going to be our judge for this Monsanto. So he’s got 680 ahead of him. And if he does things like this, limits evidence or says only some of it, let me approve what comes out. That’s going to be horrifying for these plaintiffs.

Mike Papantonio:             We already saw one ruling from this judge where it was some of these documents were made public. Okay. And they are terrible documents. These are documents you look at and you say, these people should be in prison. We shouldn’t be in civil court. You know, the Department of Justice should have done something about this.

So they, those documents are leaked. And the lawyer that said, as a public service, I need to let the public know how dangerous that is. That person, that lawyer was sanctioned by this judge for simply telling the truth. You know how bad, how bad is this stuff? Well, it’s pretty bad when you read the documents.