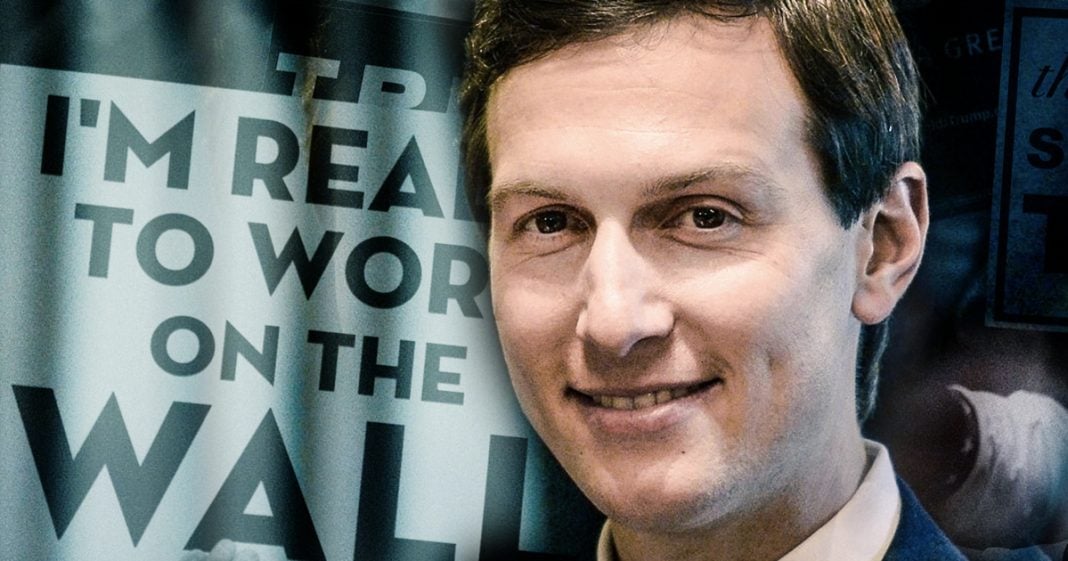 Jared Kushner, along with some help from the Koch Brothers network, believes that he can convince Democrats to get behind Trump’s plan to build a border wall. They want to take the same approach that they did with criminal justice reform, but the border wall isn’t something that’s actually supported by most people. Kushner is in over his head, and even White House aides are willing to admit that. Ring of Fire’s Farron Cousins discusses this.

Jared Kushner actually believes according to a new report that he is going to be the person to come along and solve the problem of immigration reform. Jared Kushner believes that he might actually be able to come up with a plan that’s going to get Democrats in Washington DC to support Donald Trump’s wall. Jared Kushner, the same guy who is under federal investigation for multiple different organizations. The guy who has no business whatsoever being in the White House, the guy who tried dozens of times to properly fill out his security clearance form and failed to do it properly. Jared Kushner, the guy who accidentally filled out his voter registration card and put his gender is female instead of male, is totally going to solve the immigration crisis here in the United States, but don’t worry if you think jared Kushner is a bit too stupid to figure something like this out. He’s got some help.

Okay. Other people are coming in to help him with this. Unfortunately, those other people happen to be from the Koch Network. You see, last week jared Kushner held a meeting in DC with members of the Koch Network and they sat down for several hours. Jared Kushner had a whiteboard drawing out ideas, maybe drawing little pictures for the cokes, who knows, uh, but they were trying to figure out how to address immigration in the same way that they addressed criminal justice reform because that was something that was sorely needed. Criminal Justice Reform, this administration pulled it off. You had some bipartisan support there. It was in good thing Koch brothers actually supported it, and yeah, give you credit. That was a good thing. Unfortunately, what you underestimate about that is that again, that was something that was sorely needed, that a lot of people in this country supported that had bipartisan support, and yet what you’re trying to do is sit down with Koch network members and figure out how to sell the wall to the Democrats so that you can get a deal worked through.

That’s not going to happen. Jared. Most people in this country, a vast majority of them do not want the wall. They don’t. It’s that simple. They don’t want it. They feel like it is a waste of money. They feel like it is unnecessary, they feel like it will be completely useless. Whatever their reasoning is. Dave told you repeatedly that it ain’t going to happen, and yet here you are sitting down with these Koch Network members trying to come up with your plan and what’s really interesting about this though is had this meeting with the folks from the Koch Network actually came just a day or two before they had their little weekend retreat where they were like, yeah, we’re not. We’re not doing politics stuff anymore. We’re get. We’re getting out of that for now. We’re not going to be involved. Really. You just met with the dumbest person in Washington DC to discuss policy two days before this retreat and you expected us to buy into it.

I told you yesterday that whole retreat, they was total bs and this story kind of comes along and proves that the cokes aren’t pulling out of politics. They’re just getting a little sneakier with it and they think that they can recruit somebody as dumb as jared Kushner to come in and do exactly what they want them to do because Kushner’s too stupid to realize he’s being played, which is what’s happening here. What’s really funny too, in this report from Axios, it talks about how White House officials and aids are actually almost laughing at the fact that cushion or thinks he can solve this problem because they understand how incompetent this kid truly is. Jared Kushner not only has no business being in charge of immigration policy, which Trump has put him in charge of, he’s going to go start working with pence and Kirstjen Nielsen in an attempt to come up with a compromise plan that is per Trump’s order, but coasters too stupid for that, and more importantly, this kid is too inept to even be serving in any position in that White House and that includes working as a, you know, a vacuumer or something like that.

Jared Kushner wouldn’t even be qualified to do that. This kid needs to pack up his crap, head back to New York, hire some good lawyers, and then try to fight these investigations that are threatening to take him and his entire family down.