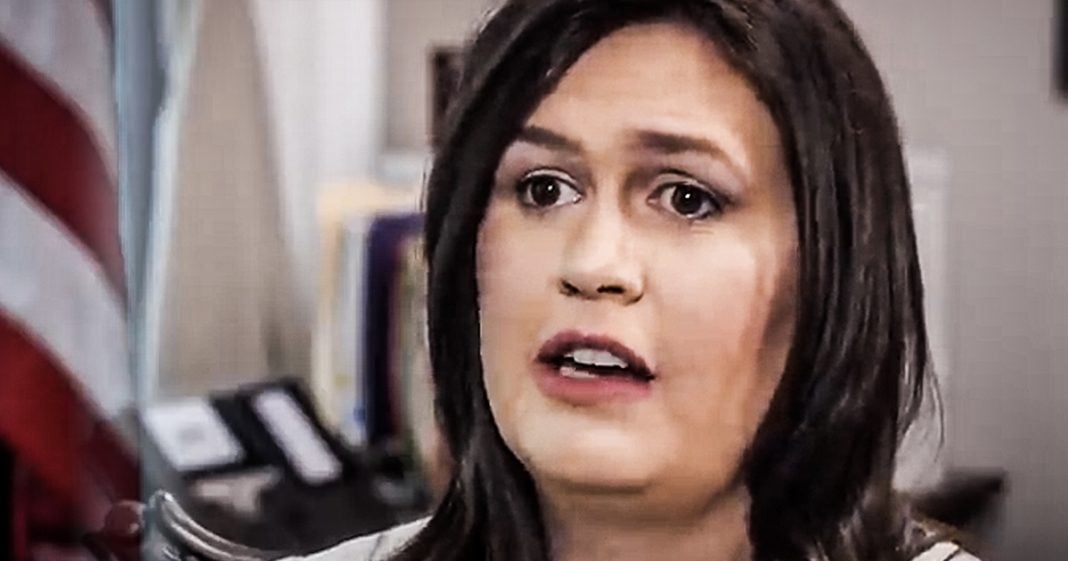 During an interview with CBN, White House Press Secretary Sarah Huckabee Sanders said that God actually chose Trump to be president and that the Almighty WANTED Trump to be President of the United States. This woman isn’t playing with a full deck, and her comments prove that. But there’s a lot of implications from her comment that she likely didn’t realize, and Farron Cousins explains those.

On Wednesday, a White House press secretary, Sarah Huckabee, sanders appeared on the Christian Broadcasting Network were she let us know exactly why and how Donald Trump became president of the United States. Take a look from a spiritual perspective for such a time as this Donald Trump of all people to be, as you said earlier in the interview, the most conservative president. I mean, there’s a kind of, in a way to blow your mind that you know, someone like Donald Trump who is sitting in the Oval Office. I mean, I know you can list the accomplishments, but at the same time, just from a spiritual perspective, there are a lot of Christians that believe for such a time as, as

this I think God calls all of us to, uh, fill different roles at different times that I think that, um, he wanted Donald Trump to become president. And that’s why he’s there. And I think he has done a tremendous job and supporting a lot of the things that, uh, people of faith really care about.

There are several things wrong with the comment you made to the CBN folks there, but I think the most important one to point out is the fact that if what you are saying is accurate, if there is in fact a deity who wanted Donald Trump to be president of the United States and therefore which influencing politics here in the United States, then you would also have to admit that this same God obviously had wanted Barack Obama to be president for eight years. This same. God obviously wanted Robert Muller to head up the special council’s office. This same God also wanted people like Alexandria ocozzio Cortez to win her primary and then the election and for the Democrats to take back the House of Representatives. See, that’s the thing, Sarah. God doesn’t just get to pick and choose what he wants to or does not want to do. Either God is involved or God is uninvolved.

That’s kind of how that works, and yet you’re sitting here telling us that guy sat silently by for centuries of American history, and then when Donald Trump came along, he thought, oh, hell yeah. I like this guy. He’s a straight shooter. I remember all the affairs he had. Remember that the access Hollywood tape, that’s my kind of Christian, so say a Sarah Huckabee, sanders. God, God didn’t choose Donald Trump to be president. A bunch of idiots wearing Maga hats. Who happened to have enough sway to change the electoral vote? Put Donald Trump in the White House, and those people are about as far away from God as you could possibly get, but it’s our electoral system are broken, failed electoral system that put Donald Trump in office, propelled by a bunch of morons who think that wearing that red hat makes them a little more masculine than they actually are.